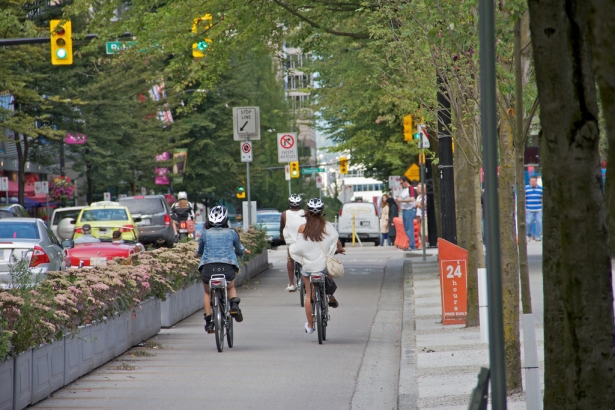 I recently wrote a blog extolling the virtues of active transportation improvements to municipalities like Vancouver. In light of Vancouver city council's approval of the Point Grey-Cornwall Greenway, I wanted to follow up on the benefits of the project and the role it has in addressing some of the greater challenges the city faces.
First, some background.

Active transportation means actively moving by walking or cycling, unlike motor-vehicle transportation. There are numerous public policy reasons for supporting this objective:

• Active transport infrastructure is cheaper to build and maintain per passenger kilometre of travel, reducing the long-term fiscal burden for municipalities. It also improves the liveability of the community.

• Active transport is healthier and promotes long-term health outcomes (also related to costs). Cities with better connectivity for cyclists have healthier adults, all else being equal. They have fewer criteria air contaminants (pollutants used as indicators of air quality), which cause a range of adverse health effects, and fewer traffic accidents. Increasing active transport reduces the incidence of dementia, cardiovascular diseases, diabetes, cancer and depression.

Looking through a long-term lens, active transport is a critical component of efforts to significantly reduce our GHGs to keep warming below two degrees. Transportation is one of the toughest sectors in which to reduce emissions. This has mostly to do with the deeply rooted system of vehicle dependency, which begets more vehicle use. Vehicle adoption in the post-war era boomed, which then promoted vehicle-dependent patterns of development, which begat the use of more vehicles. Because we can't simply reshape the physical form of our cities, this legacy makes shifting away from vehicle dependency difficult.

Motor vehicle transport makes up two-thirds of the trips we make and person-kilometres we travel in Canada. This huge share of passenger kilometres reflects that motor vehicles are our preferred choice for travel and that because of that, we build amenities and destinations for travel that suit the longer distances of personal vehicles. We still make a significant number of trips by foot and bike (32 per cent), but those trips are much shorter (one to two kilometres). Clearly we aren't averse to walking and biking, but accessing workplaces and grocery stores isn't always feasible. 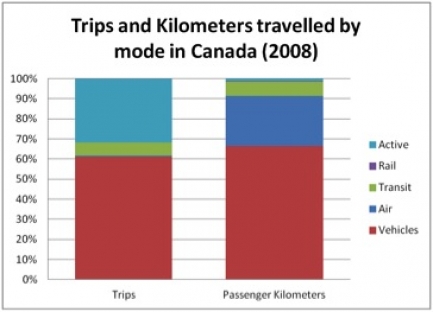 That brings us back to the City of Vancouver's initiatives to increase access and use of active transportation routes. Because Vancouver is a land-constrained city with little room to build more roads to accommodate more vehicles and has experienced significant population growth over the past 15 years, it has been prioritizing alternative transportation modes. Vancouver's congestion is already second-worst in North America, mostly because of tight land constraints and decades of vehicle-dependent development. Vancouver's population is expected to grow by another 25 per cent by 2040, which will exacerbate the problem. Imagine the impact of putting an additional 25 per cent of vehicles on the roads at any given time with no opportunity to expand the road network and you can appreciate the traffic concerns of municipal officials.

Recognizing this problem since 1992, Vancouver has identified active transport as an important dampener to vehicle use and has expanded the cycling network from 50 to 250 kilometres. Vancouver now leads every North American city for the share of commuter trips made by bike and foot (four and 14 per cent respectively), all while having the lowest annual fatalities of any city.

Board of Change learns of City's ambitious cycling and walking targets