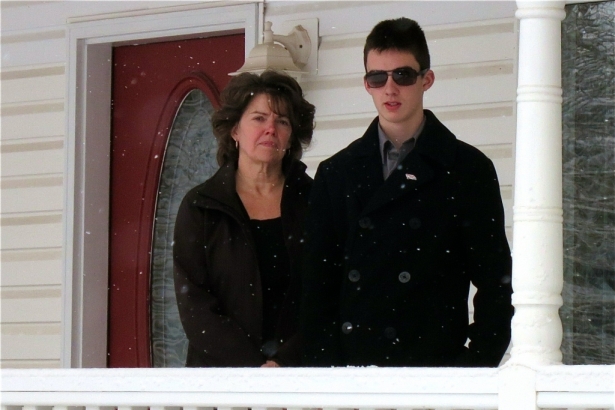 Anne Brown, who lives near the Industrial Heartland of Alberta, refuses to leave her home. She poses on their porch with her son Kristian, 16. Submitted photo from Anne Brown

Locals living close to oil and gas projects in what is known as Alberta’s Industrial Heartland are not surprised that a recent study found that chemicals in the air cause blood-related cancers.

“There’s many people that have been diagnosed with cancer. Many of them have left. Some of them have died,” said Anne Brown, who lives in the Riverside Park subdivision, near Fort Saskatchewan, one of four counties part of the Industrial Heartland.

The Nobel prize-winning chemistry department of the University of California in Irvine conducted the study. It found 77 volatile pollutants in the air, including carcinogens.  Leukaemia and Hodgkin's lymphoma among men “stood out statistically,” said Isobel Simpson, one of the chemists involved in the study.

Simpson said she can only speculate that the blood-related cancers were prevalent in men because they might have worked in the industries.

The industrial area includes 582 km2 space where more than 40 chemical, petrochemical, oil and gas facilities have been established since the 1950s. Sometimes referred to as “Upgrader Alley,” it is the largest hydrocarbon processing area in Canada and is located about 30 km northeast of Edmonton.

Brown was a member of Citizens for Responsible Development, a group that spoke at the National Energy Board hearings in 2010 against French oil giant Total that wanted tto build a bitumen upgrader in the area.

The upgrader was approved, but is slated to continue in Fort MacMurray instead. Two other projects that will upgrade a total of 410,000 barrels of bitumen per day to crude oil have been approved.

At the hearings, the group voiced their concerns about  the increasing rates of cancer they noticed in the community.

“Their quality of life was just robbed from them. Some of them have loved ones who passed on with cancer now. After many years of fighting and struggling, they were able to get out. But it took years of their lives to be taken out,” Brown said.

They were ‘taken out’ by buyout deals, known as the Voluntary Residential Property Purchase Program. Residents living in the area can apply for the package if their home is close to one or multiple industries.

Mike Hudema, an environmental activist with Greenpeace, said the program silences many of the residents diagnosed with cancer, effectively keeping the issue away from the public eye.

“A lot of people left the area because there had been people who had been diagnosed with cancer, and basically took out buyout packages and signed a non-disclosure deal where they can't talk about it,” he said.

The province’s Environment and Sustainable Resource Development monitors the air quality in the area daily, said Nikki Booth, a spokesperson for the ministry. It conducts tests along with the non-profit Fort Air Partnership, whose board members include people associated with Shell Scotford and Dow Chemical, which run facilities in the area.

Do the oilsands threaten our safe climate? Hansen's "game over" vs Oliver's "minuscule amount"