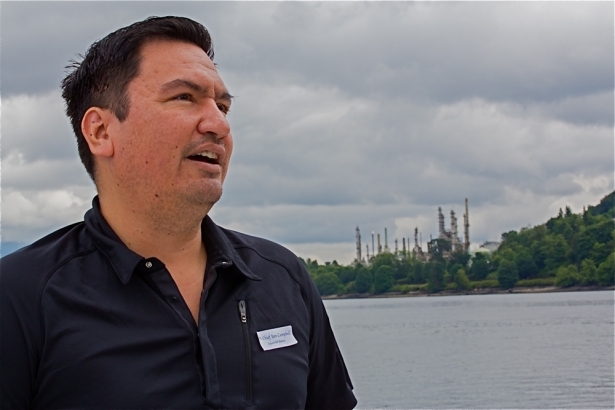 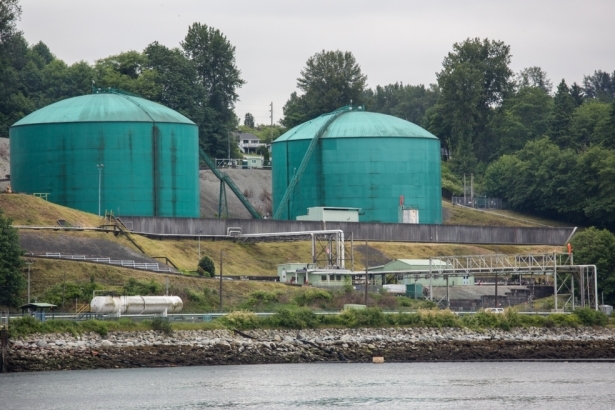 Chief Ian Campbell en route to Kinder Morgan's Trans Mountain pipeline terminal. Second slide, Kinder Morgan terminal, for most, out of sight, but not out of mind. Photographs by Zack Embree

Chief Ian Campbell of Squamish First Nation points out the locations where First Nations people lived along Vancouver's coast before colonization robbed them of most of their land.

Campbell has a deep voice that commands attention.  He points back to Granville Island.

"The land is laden with mythology. Our history is your history. It's exciting to bring these stories out again because they've been dormant with the residential schools, the epidemics that decimated our families in the 1800s and the effects of colonization."

"We have relatives all the way down the Puget Sound, through the Haida land back to the Lower Mainland," Campbell continues.

"Our territory from Squamish goes from Point Grey around the Fraser River and comes back up through Indian Arm all the way up to Whistler. All the waters that flow into Howe Sound, all of those rivers up in the Northern region is our traditional territory we have utilized for hundreds of years".

"But today, we're more or less invisible in our own land. The average person walking these streets has no idea of our history. The way colonization has impacted our lands, it marginalizes First Nations people but also all Canadians with this attitude of mass exploitation."

Chief Leonard George's legacy: the beauty of the earth

A campfire crackles on the rocky beach of a park co-managed by the district of North Vancouver and the Tsleil-Waututh Nation.  Chief Leonard George, son of the iconic Canadian actor, Chief Dan George, made famous for his role in Little Big Man with Dustin Hoffman, stands nearby with George's nephew, Rueben.

Rueben George chats with a West Vancouver filmmaker and an environmental philanthropist and nature photographer, who played a role in achieving the protection of the Great Bear Rainforest.  Leonard George followed Dan George as chief and played a big role pulling his people out of poverty in the seventies.  Leonard's son, Justin, who served as chief until last year, helps tend the fire.

All of the chiefs since Dan George have been his relatives.  Cates Park, or Whey-Ah-Whichen (which means faces the wind) provides a stunning vantage point for observing Kinder Morgan's position in the psyche of the city.

Chief Leonard George in a photograph below by Zack Embree 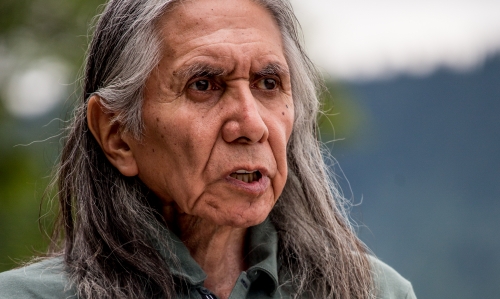 At the 2010 Winter Olympics in Vancouver, actor Donald Sutherland read a poem by the Dan George at the opening ceremonies:

The beauty of the trees, the softness of the air, the fragrance of the grass, speaks to me.  And my heart soars.