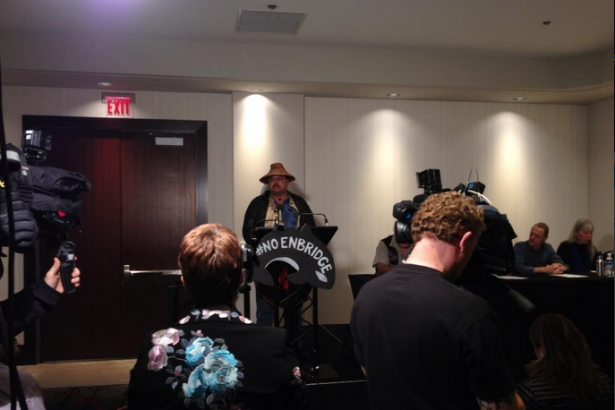 Gerald Amos recalls joking to a friend awhile ago about Enbridge’s Northern Gateway Pipeline. He said he had no doubt the National Energy Board's Joint Review Panel would approve the project, but there wouldn’t be less than 200 conditions. He was only off by nine.

Amos, chair of the Friends of Wild Salmon Coalition, traveled from Kitimat to speak at a press conference held this morning at the Hyatt Regency Hotel downtown. ForestEthics Advocacy hosted the event. He said no number of conditions could make a project like this safe because nothing can account for human error and mechanical failure.

Amos said the actions that prevented the government from allowing fish farms in the Skeena Watershed should serve as an example of what the people are capable of. Several MLAs who landed on the wrong side of the Friends of Wild Salmon found themselves out of a job in the election that followed.

“I think that should inform the politicians on this.”

Des Nobels, a representative of the United Fisherman and Allied Workers Union, as well as T. Buck Suzuki Environmental Association, spoke about the NEB’s failure to do the only thing it could have done to prevent an oil spill: say no to Northern Gateway.

Nobels cited the nearly 9,000 written submissions the board received, nearly all of them against the pipeline.

“Here you have a very clear indication of where the populace of this country is heading.” Nobels said the decision is also just plain shortsighted, especially when it comes to reducing fossil fuel dependence.

“We have a tendency to pay people to take our resources away,” he said. “We’re going to require some of that oil and some of that gas to make that transition, ad we’re selling it off as quickly as we can.”

Ben West, tar sands campaign director with ForestEthics, said he was also unsurprised by the recommendation, but ultimately disappointed by what this outcome says about the validity of the consultation process itself.
“If the National Energy Board wouldn’t reject this pipeline, I can’t imagine what they would reject.” He said hopes the silver lining will be that more average Canadians—the ones who believed the government would do the right thing and trusted in the review process—will see the need to get involved.

The six nations of the Yinka Dene Alliance, a declaration banning Enbridge from their territories that now counts more than 1,500 signatories, have vowed to use legal avenues to block the project, drawing on the aboriginal rights and title that have been successful in vetoing projects in the past. West said ForestEthics has already begun knocking on doors in anticipation of the 2015 election.

There have already been numerous instances of First Nations groups taking to their land. The Unist’ot’en clan of the Wet’suwet’en people has been operating a resistance camp in their territory for the last four years, blocking the proposed routes of numerous development projects.

He compared the current circumstances to those that led to mass protests In Clayquot Sound in the nineties. At the time, environmentalists and citizens alike came together to keep out logging companies and protect First Nations territory and old-growth forest. Thousands of people participated in blockades and nearly a thousand were arrested, making it one of the largest instances of civil disobedience in Canadian history.

“This could end up making Clayquot Sound look like a walk in the woods.”

Coal protest at Port of Vancouver offices gets ugly