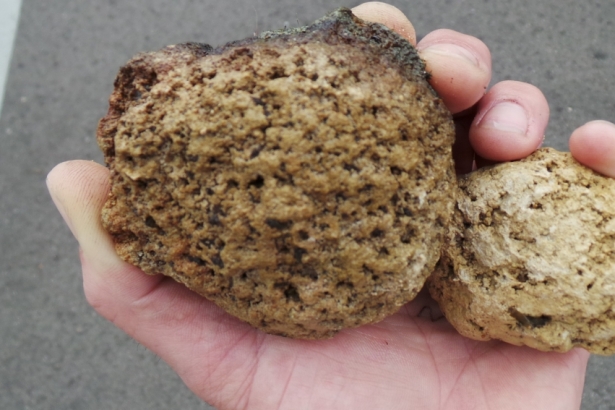 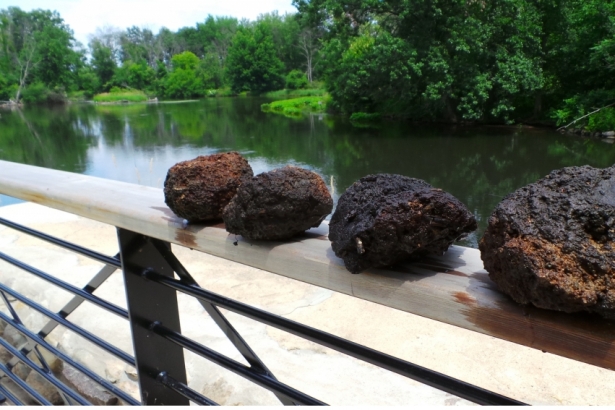 "It was about a year ago that I'd start seeing these strange formations at the bottom of the river. They looked just like rocks, but there was a strange, burning almond smell as you went past them," engineer Craig Ritter said, describing the strange "tar balls" that began appearing along the bottom of the Kalamazoo River, where Enbridge spilled over 840,000 gallons of tar sands bitumen in 2010.

Some environmental activists and oil spill victims in the area, however, have expressed skepticism, arguing that they are actually calcium carbonate (or tufa), which is a natural porous rock formation, that became noticeable after being stained with iron and manganese. Michigan State University ecologist Stephen Hamilton believes they are natural tufa rock formations that became more exposed through dredging of the river, ordered by the U.S. Environmental Protection Agency as part of cleanup. 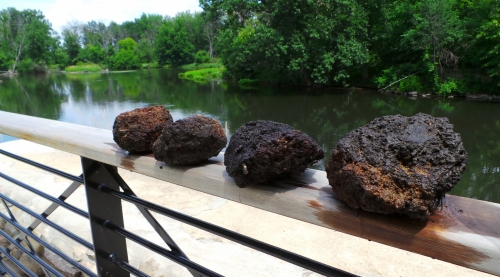 Regardless of the rocks' origin, one troubling aspect of the formations is what was found in them during testing. Ritter and other residents impacted by the spill sent samples of the “rocks”, Kalamazoo river water and a controlled documented sample from the oil spill, to be analyzed by Analytical Chemistry Testing (ACT), Inc. in Mobile, Alabama. The results were then reviewed and corroborated by Geolabs Inc. in Massachusetts.

The oil from the rocks were an exact match with the oil that spilled from the Enbridge 6B pipeline. Dr. Robert Naman, the lead chemist from ACT on the project, said he found compounds identical to those found in the Gulf of Mexico when Corexit dispersants were mixed with crude oil in response to the BP Deep Water Horizon spill. BP's use of Corexit came under fire in 2010, as the chemical could damage red blood cells, kidney and liver when people are exposed to it repeatedly. But both Michigan officials and the EPA asserted that Corexit was not used during the Kalamazoo spill cleanup. 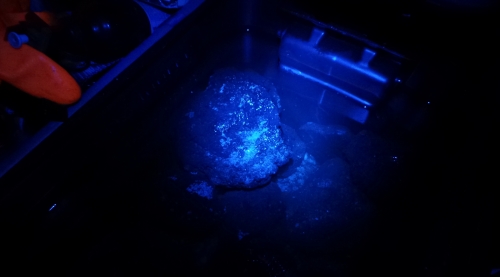 Michigan a "canary in the coal mine" for tar sands spills

"As far as I'm aware, it's the first time the 'tar rocks' have been reported," said Dr. Riki Ott, a marine toxicologist who examined the same river rocks with Ritter and other Michigan residents.

"I do know Canada has had more tar sands spills than the U.S., because you've had it longer, but this seems to be the first time [the rocks] have been observed and reported," she said.

Ott's main concern area of research are the health impacts of oil spills on the public. She spends three to four months every year in the Gulf to examine victims of the BP spill, and visits Michigan and Arkansas as well on a regular basis.

She said the symptoms she saw with people getting sick from the tar formations were "characteristic of a suite of initial symptoms associated with oil and solvent exposure." She added that oil spill victims are far more sensitive to chemicals than people would be if they were to encounter them for the first time.

"Once you're exposed, it seems to have some memory in your body. Your body, once re-exposed to these same chemicals, over-reacts. It goes into hyper drive to tell you that it's back in a dangerous situation. That's called chemical sensitivity and what I've observed in residents when I go back -- because they always take me to the Kalamazoo river -- is that they all get sick. Sick to the point of missing work for three or four days afterward."

She thinks Michigan residents' experiences with the bitumen spill serve as an example for what could come with other pipelines such as Keystone XL that are currently under consideration.

"I think Michigan is not only a canary in the coal mine for this kind of [bitumen] spill, but it is a canary for how inadequate our state and federal response is to these types of disasters, and how unprepared the industry is. They just want to get it closed and sign off. It's just like a huge inconvenient truth," she said.

Ritter said children in the area still regularly go out to the river to play and is upset to think that children may be getting exposed to harmful chemicals in the rocks.

Asked if the rocks float in water, Ritter said they don't, but that they are almost buoyant and have a consistency like chalk. "They don't float but I've got one in a jar and the thing is almost buoyant -- the bottom pinnacle still touches the bottom," he said. "What I'm really concerned about are the kids. They still go playing by the river, and these rocks are just like chalk. What if they get their hands in their mouth afterward?"

Enbridge has been contacted for comment, but did not provide a reply before publication.