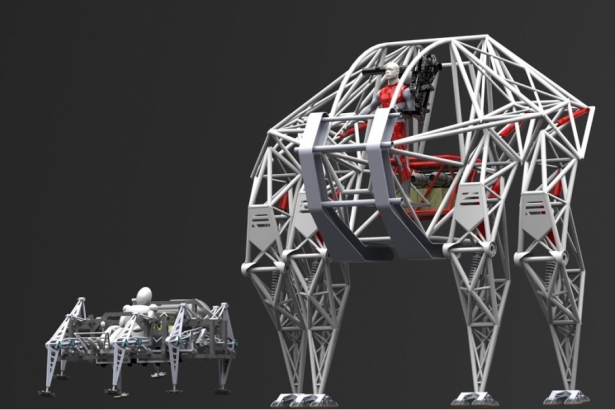 Prosthesis (right), a Canadian robot project based in Vancouver. Dependence on a fossil fuel extraction to build the economy stifles innovative new projects, the author argues.
On the industrial edge of downtown Vancouver, amid towers of shipping containers and rundown warehouses, several tons of steel is slowly coming to life. Engineers at a Canadian research group called eatART have just put the finishing touches on a 300-kilogram, two-metre-high mechanical leg. At a technician’s command, the entire mass of metal, air springs and hydraulics flexes and leaps into the air, landing nimbly but with a deafening thud.

It’s the first piece of a creation straight out of science fiction, a two-storey-tall “racing robot” called Prosthesis: Canadian-conceived, Canadian-built and eco-friendly. A series of lithium ion batteries will power the entire apparatus, capable of reaching speeds of 30 kilometres per hour and – presumably – blowing the socks off anyone who catches a glimpse.

That this kind of wild innovation is happening practically next door to an oil refinery poised for expansion, and in a province weighing the merits of a massive new pipeline, is poignant, to say the least. The debate over oil, and in particular the proposed Enbridge Northern Gateway pipeline, has polarized communities across Canada. Proponents say the project will earn more than $81 billion in government revenues over the next 30 years.  Critics point out the potential environmental costs and effects on local communities. But there’s another issue that the debate obscures: the impact of oil on Canadian innovation.

Getting beyond the beaver

Resource extraction – taking what’s on the earth, in the seas and below the ground and selling it at profit – has been the prevailing economic model in Canada for the last 350 years. It began with fashion. When the Hudson’s Bay Company set up shop, sartorial standards demanded a beaver pelt top hat. And that’s why people sailed for months to reach our frozen shores and spent years scouring the wilderness.

Since then we’ve extended the model. We’ve moved beyond beaver pelts and now we cut down trees, dig up minerals, pull fish from the oceans and much more. But fundamentally we have failed to get beyond the beaver. And this is a problem because we’re running out of things like beavers.

In this respect, another pipeline may not necessarily be a step in the right direction. More oil only deepens Canada’s dependence on resource extraction. It ties our economy to a distinctly 20th-century model, one whose days are numbered, rather than a 21st-century one. And it snuffs interest in fostering real innovation in high-growth sectors that are not only more sustainable but – just maybe – more profitable.

Tapping the “oil of the new millennium”

Take my field, technology. In 2005, I founded NowPublic in Vancouver, one of the world’s first user-generated, social news sites. We helped pioneer what’s now known as citizen journalism – pooling the eyes and ears of the entire Internet to report a diversity of news that otherwise would go unnoticed. Instead of relying on natural assets, which are diminishing, we trafficked in information assets, which happen to be growing exponentially. It’s no coincidence that data – big data – has been called the crude oil of the new millennium. Used creatively, it can be just as valuable as anything that bubbles out of the ground.

The focus on pipelines – this retreat to resource extraction as Canada’s only way forward – smothers this kind of innovation, while leaving unnoticed and unappreciated some of the real mind-blowing, next-generation innovations in Canada . . . like one of my favourites, that house-sized racing robot.

In fact, I only know about the project because it has been happening, quite literally, in my own backyard. My brother is the lead engineer. Eight years ago he set aside a 150-square-foot garage to pursue his dream, sinking his own savings into the venture. Now, he operates from a hangar with a team of engineers from across Canada.

His vision is ambitious, ridiculously so. The goal is nothing less than a wearable robot, with a human pilot inside controlling a five-metre, 3,500-kilogram walking machine straight out of Avatar. Building it has required radically new technology, both hardware and software, a willingness to think big and take risk and a commitment to doing it all with a minimal carbon footprint.

But it’s coming together – a small example of what Canada can do if we begin to embrace the potential of our own innovators and entrepreneurs and look beyond a resource-driven outlook.

See more
All the things Trump has broken
Total tragedy