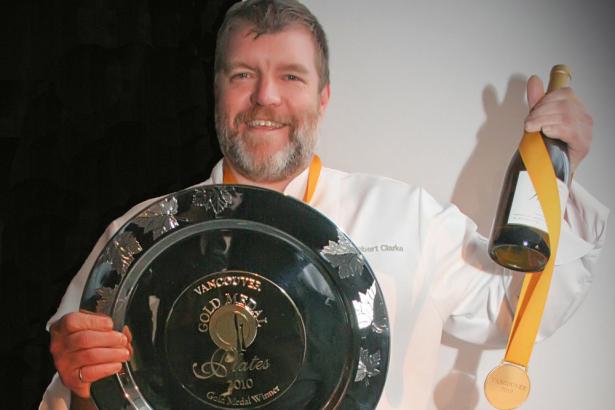 After finishing second place in 2009 (to Rob Feenie) and again in 2010 (to Robert Clark), Top Chef Canada winner Dale MacKay will go for the top prize at the 2011 Gold Medal Plates competition at the Westin Bayshore Hotel, in Vancouver, on November 4th in a battle against 10 of B.C.'s most talented chefs.

Gold Medal Plates is the ultimate celebration of Canadian excellence in cuisine, wine, athletic achievement and the arts. The Vancouver competition is one of nine that will occur in select Canadian cities this fall, with the winners from each city competing in the Canadian finals in Kelowna in February 2012.

The 2011 competition in Vancouver features:

Each chef will prepare one appetizer-sized dish for approximately 500 to 800guests. Working with culinary consultants, Chefs will select a premier Canadian wine or other libation to pair with his or her dish.

Gold Medal Plates Vancouver will feature a silent auction as well as a live auction, featuring spectacular getaways with Olympians and Canadian entertainers to destinations such as Tuscany, Napa Valley, Chile, Provence,   Burgundy and Kelowna for the Canadian Gold Medal Plates finals.

Gold Medal Plates net proceeds benefit The Canadian Olympic Foundation, which generates support in various ways to assist Canada's athletes in becoming ambassadors for sport, healthy living and the pursuit of excellence across the nation. Over the past six years, Gold Medal Plates competitions across Canada have raised more than $5 million for The Canadian Olympic Foundation, which supports athletes and high performance programs such as Own the Podium.

Mingling with the guests and enjoying the culinary dishes will be more than 25 Olympians. The emcee for the evening will be Vancouver native Marnie McBean, a triple gold medallist in rowing.

Come join in the spectacle of food and fun! I will be covering this event so please check back for the recap. For more information on the 2011 Gold Medal Plates competition this Friday, please visit www.goldmedalplates.com