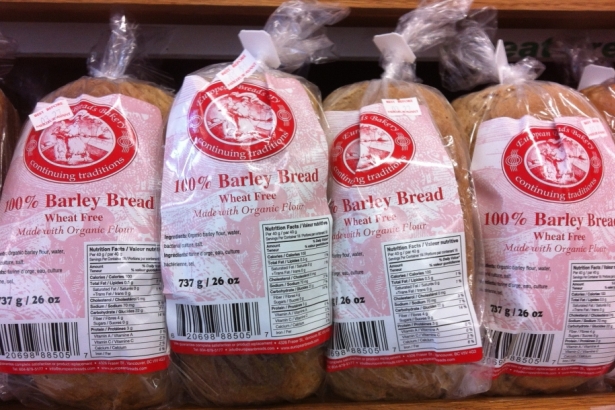 There are more reasons to seek wheat alternatives than simply avoiding gluten. For example, barley contains gluten. If you’re celiac, then barley is not a safe alternative for you. However, for the rest of us, it can be a nice change from the usual staples. In some cases, it can actually be better.

For example, consider the barley bread from European Breads Bakery. You may have seen their breads in little shops around town, made from such grains as spelt, kamut, and of course barley.

When I first saw the words “barley bread,” I was not hopeful. I expected both the flavour and texture to be, um... challenging. I do like barley, but could not imagine how its flavour or heaviness could translate into palatable bread. Regardless, I had to try it. The nerd in me was compelled to learn from this bread, even though I expected it to be terrible.

Was I ever wrong.

Milled and baked into bread, barley takes on a compelling nuttiness which gives it a distinct yet very accessible flavour. It is neutral enough to make a great sandwich but distinctive enough to have its own character. Unlike many wheat free breads, it also manages to be moist and spongy. In fact, I prefer it to ordinary wheat bread as an everyday loaf.

Like any other bread, it is best when bought fresh from the bakery. However, barley's sturdiness allows it to keep for several days without drying out completely. And at five bucks a loaf, it's pretty good value.

Barley itself is considered a superfood. Experts regularly tout its benefits for heart health, blood glucose regulation, digestive health, and even cancer protection. But if I’m going to be honest, the reason I tried it was far geekier and less practical.

As a grad student, I studied ancient philosophy and one of my very favorites, Epicurus, was said to subside almost entirely on barley cakes and diluted wine. The symbolism of pondering Epicurean philosophy over a piece of barley toast was simply too much to resist.

And what do you know? Sometimes those nerdy impulses actually pay off.