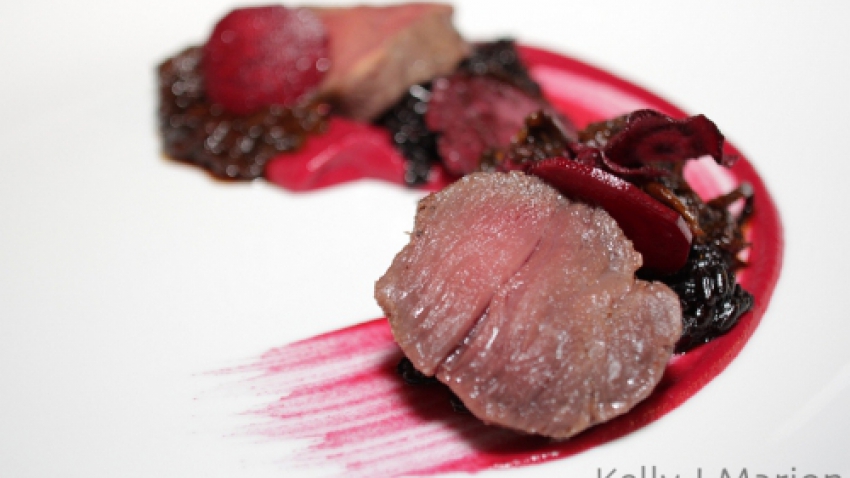 An in-house cultivator with sixteen live trays of herbs makes the ingredients delicious. To be able to chow down on a dish with micro greens that are all only six minutes old is incredible. The flavours are pronounced, the colour is vibrant and the aroma is penetrating.

I dined at Alta during my recent visit to Whistler for Cornucopia for the Altitude Australia event. While I was psyched for copious amounts of red wine, I was disappointed to discover that the meal catered mostly to white wines. It's not that I dislike white wine, by any means, it's just that I have a fond association between Australia and red wine. Wine pairings for the evening were chosen by Sommelier Eric Griffith.

Since Alta is known for their creative and well-crafted cocktails, I started my meal with a Nectar 75, which, as it sounds, is a spin-off of a French 75. The main difference? The addition of yellow chartreuse. As I sipped on this slightly sweet and effervescent cocktail, I had the opportunity to chat with the other diners and grow my appetite as aromas from the kitchen enveloped the room. 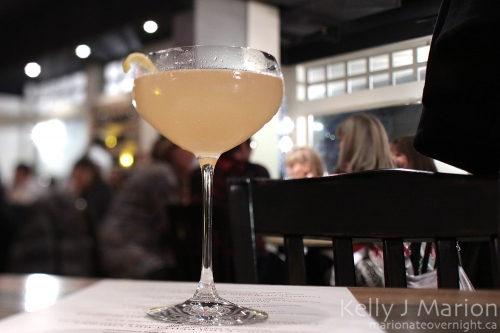 Our first course of the evening was a sharing plate of Kusshi oysters complemented by verjus granita, tuna tartar and horseradish. The plate was split between dress and undressed oysters so that they natural flavour of the oyster could also be appreciated.

Kusshi is Japanese for “precious”, denoting the small, gemlike shells. They are mildly sweet and plump with a nuance of creaminess. The verjus (juice from pressed, unripe grapes, crab-apples or sour fruit) granita (icy flakes) was a unique topping for the oyster, while also serving as a palate cleanser between the dressed and undressed versions. 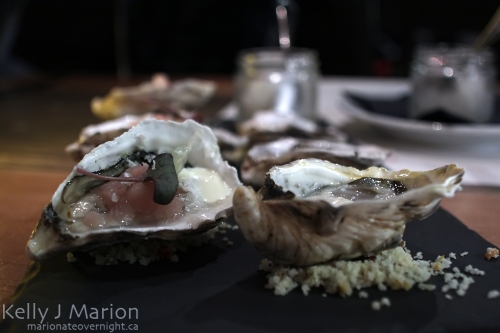 The second course was a Rossdown Farm red curry chicken with ancient grains, a mushroom and black garlic jam, a coconut and chicken liver parfait and fresno chili.

This dish was elegantly displayed on a long plate with morsels that seemed meticulously put in position. The chilled chicken was lightly curried, evident by its appearance as well as its mouthful. The chili added just a nuance of heat so it was suitable for those with a sensitive palate. The ancient grains added texture to the dish, while the jam added an earthy sweetness and the chicken liver contributed a touch of umami. The coconut slivers linked with the Thai theme from the red curry. 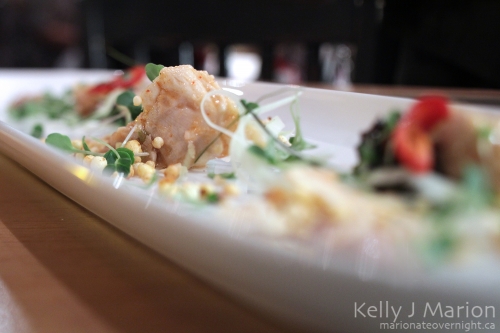 When I referenced the six minute old micro greens at the beginning of the post, I was talking about the ones that topped this dish. The fried octopus was lightly battered and complemented by the refreshing citrus "salad"and the subtle kick from the jalapeño. I would've opted for more fried octopus and less mussels, simply because I prefer my mussels warm. 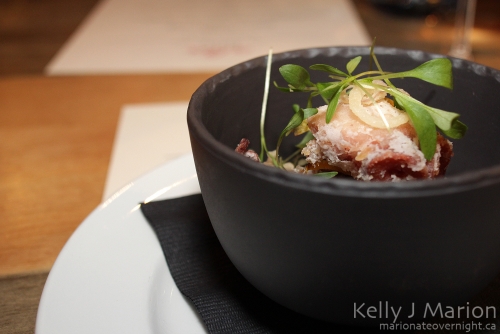 This was a very delicate dish with the mildly sweet and smooth barramundi, and the frail Steelhead roe. Allowing the roe to pop in your mouth with a piece of the barramundi was a gastronomical delight. The dish was rounded out by the nuttiness and hearty mouthful from the borlotti beans and the creme noisette, but I felt that the radish contributed to aesthetics more than it did to the overall flavour.

Pairing: '12 Shaw and Smith 'M3' Chardonnay, Adelaide Hills S.A. - deftly oaked (20%) - Shaw and Smith is a leader in the industry for promoting fine wine in Australia. 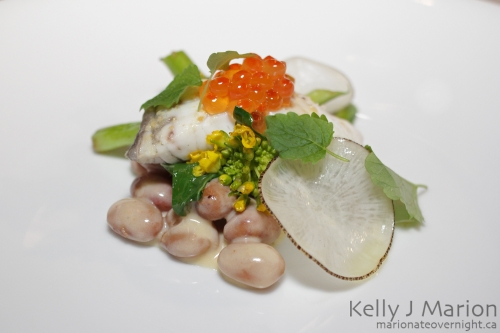 Wattleseeds were traditionally used as a food by Australian Aboriginals and were eaten cooked or milled into flour to make bread. They are versatile and nutritious, with a low glycemic index, so they were, and continue to be a great addition to any meal. In our dish they added texture, nutrients, and a nutty flavour that stood up against the fatty and flavourful lamb that was delightfully seasoned. The pomelo lightened up the dish and acted as an in-dish palate cleanser, but was also tasty with a bite of sausage and some wattleseed.

What's pluck? Pluck is the heart, liver, and lungs of an animal used for cooking. 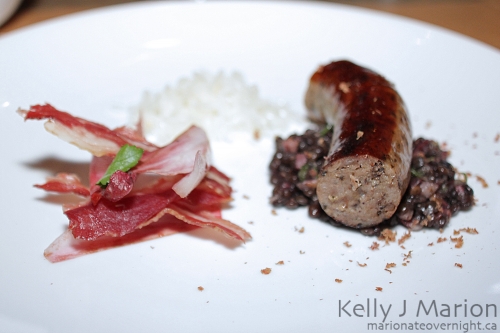 For our second-to-last course we dug into a roasted kangaroo loin with star anise and long pepper, oxtail and dried plum, black rice in black tea, textures of purple beets, black truffle and aromas of burnt eucalyptus.

I lived in Sydney, Australia for three months while doing an internship at the Public Relations Institute of Australia, during which time I consumed my fair of share of kangaroo steaks. Needless to say, eating kangaroo floods my mind with memories of my time in that lively city. While kangaroo is not for everyone, it certainly is one of my favourite game meats; a tenderloin cooked medium rare is heavenly to me. The oxtail was rich and sweetened by the dried plum and was competed only slightly with by the black truffle. The black rice added further texture to the dish with it's sticky consistency, while the purple beets added an incredible hue.

This was the second course that featured two different proteins, despite being in "small plate" style (the other being the octopus dish). I was intrigued as to why Chef Nick Cassettari would use two meats in one dish, and learned that it was mostly for textural purposes and not a regular style for him, but rather something he pulls out for special dinners. 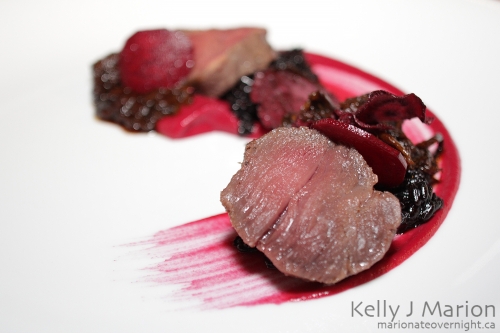 As if we could fit anything else in our stomachs, the last course of the evening was a compote of quince, roasted apricot sorbet and vanilla panacotta with pasmak, orange daquaise cake, burnt cinnamon and Pemberton hazelnuts.

I have little to say about this dish except that for the fact that this seemingly superfluous list of ingredients all pieced together to create a lovely dessert. There were a ton of textures, but they weren't overwhelming to the palate and complemented each other quite well. 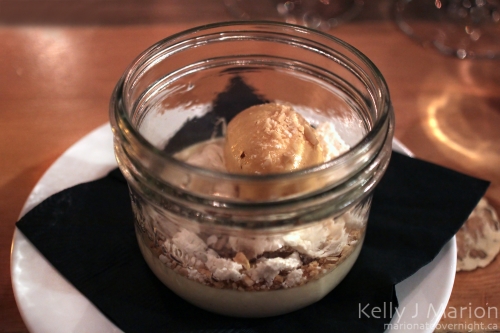 Alta's service was great, the menu was creative and the atmosphere was modern fine dining, but welcoming. Would I go back to this event next year? Definitely.

For more photos from Cornucopia 2013 check out my collection on Flickr.