The World's most expensive food shines in this three course meal. 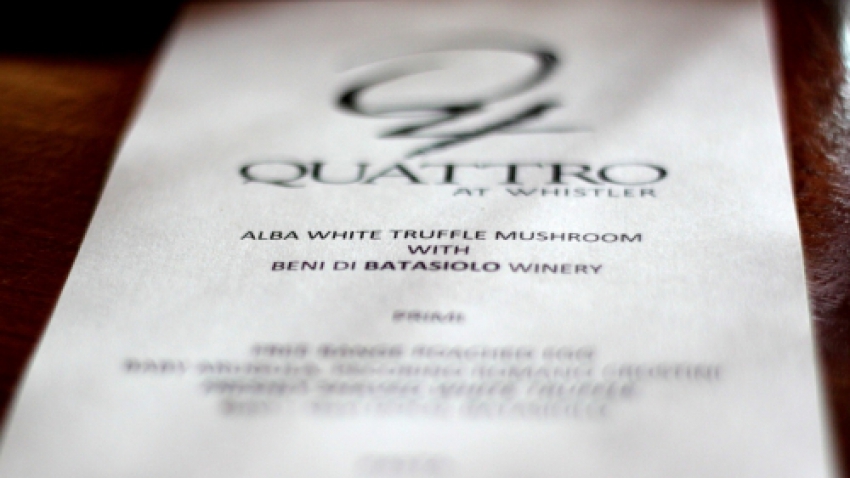 A mere three days before Quattro hosted their white truffle luncheon for Cornucopia they received their mushroom supply from Italy.

There could be many reasons for this last minute delivery, including the fact that October and November are the busiest months in Alba's truffle market due to the Fiera del Tartufo (truffle fair) taking place. Or maybe it was to ensure ultimate freshness as the irregular-shaped, warty objects only last ten days after harvest. Whatever the cause it had the staff at Quattro feeling the pressure.

The luncheon I had come for alongside  media representatives including Bobbie Hasselbring of Real Food Traveler, Renu Singh from Darpan Magazine and Crai S. Bower, a travel and food writer from Seattle, consisted of three courses with wine pairings. 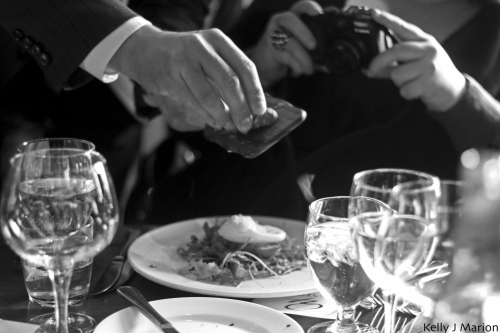 As we made our way through the three courses, Luc Trottier, Restaurant Manager of Quattro and Jeremy Trottier, Executive Chef, shaved paper thin slices of truffles on each of our dishes. As a big fan of white truffles, loving their pungent, earthy scent and musky mouthful, I must admit I was eyeing the other plates as they received their truffles, feeling envy if they got even a slice more. 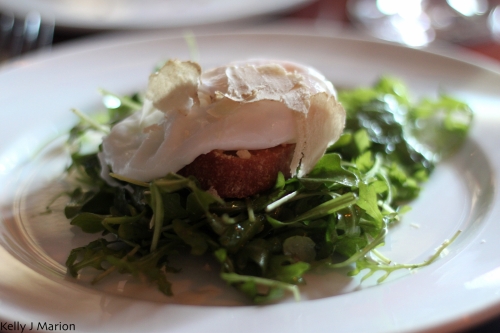 Had the egg have been runny as it was meant to be this dish would've been a winner. Unfortunately there may be some lag time between the dish completion and the dish being served as it seemed it may have cooked a bit longer than intended under a heat lamp. I would've enjoyed seeing the bright orange egg yolk burst and flow over the crostini and arugula but instead it just sat there riding the crostini like a chubby but sturdy surfer. The arugula provided a nice bed for the egg and crostini adding color to the otherwise neutral coloured dish. The citrus dressing was refreshingly prevalent but not overwhelming. Despite my complaints on the overcooked and "too tidy" egg I still liked this dish. How could I not? It has truffles on it. Imagine now if the truffle flavour had have seeped in to the runny egg... 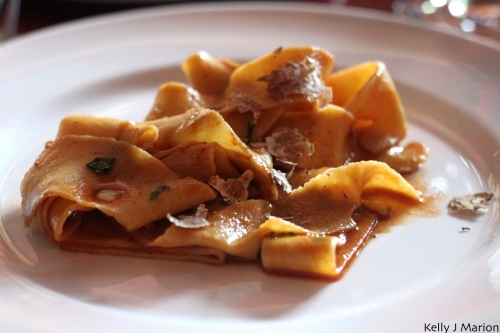 I appreciate the fact that this pasta was fresh but that should be standard practice in Italian restaurants, especially at one as renowned as Quattro. The dried egg pappardelle (you could tell by the straight sides versus fluted) was cooked well and presented simply, with the pasta folding over itself and the light from the window casting a very photographic glow.

The dish needed a little bit more flavour as it was pretty bland, drawing most of the taste from the truffles sitting atop. The hint of duck succo was pleasant and a great idea but needed to be exaggerated enough so that it stood up to the pasta without overpowering it. I didn't taste or notice the parmigiano reggiano or the parsley at all.

Interesting fact about papperdelle: The name derives from the verb "pappare", to gobble up. 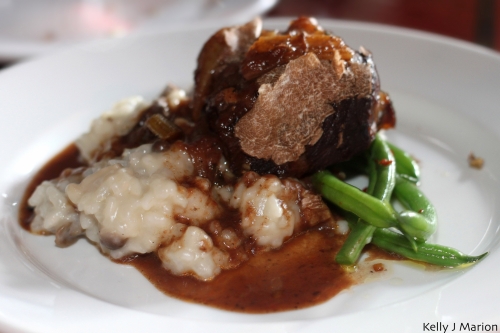 Although there were mixed opinions about this dish I really enjoyed it. I loved that it's rich, creamy and salty flavour complemented the milder taste of the tender, braised beef. There were large mushroom chunks in the risotto and the rice was cooked to the perfect medium between al dente and mushy. Having tried many risottos in my life it always amazes me how often this seemingly simple dish is ruined. The Batasiolo Barolo braise didn't stand out in the beef but surrounded it and was a great pairing for the dish with its earthy and spicy taste and its full body. 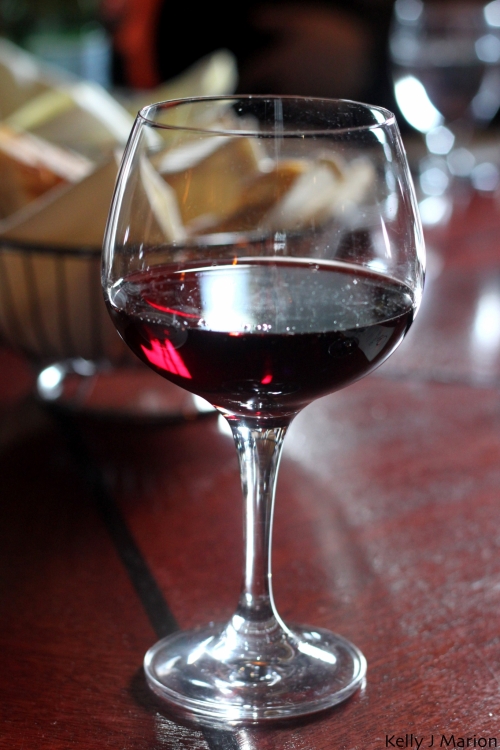 Although untraditional it would have been nice to see the truffle used in some sort of dessert. It's hard to have an Italian meal without a sweet finish of tiramisu or gelato, both which could be garnished and glorified by the tasty and odd "magic mushroom". 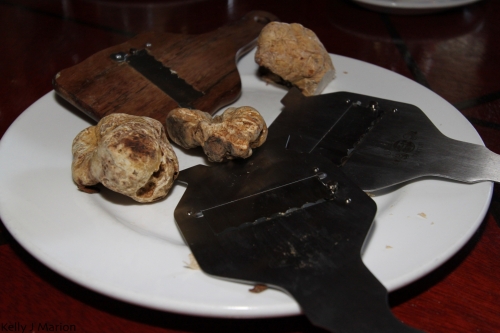 Jeremie Trottier, Quattro's Executive Chef, has been with the restaurant for 12 years and takes pride in using fresh, local ingredients, many from North Arm Farm in Pemberton. He claims it tastes better, as many diners can easily agree with. In the case of truffles for this luncheon though, it was the highly esteemed, expensive Italian truffles that were sought after by the diners so of course he had to make an exception.

• The Tuber magnatum pico white truffle is found mostly in northern and central Italy, while the Tuber borchii, or whitish truffle, is found in Tuscany, Romagna, Umbria, the Marche and Molise.

• Italian white truffles are very highly esteemed and are the most valuable on the market.

• Truffles are mushrooms which are believed to have started growing underground to beat forest fires, drought and severe cold.

• Truffles range from the size of a walnut to that of a man's fist. The season for most truffles falls between September and May.

• The truffle has been described variously as a diamond of cookery, fairy apple, black queen, gem of poor lands, fragrant nugget and the black pearl.

• Pigs, trained dogs and goats are used to sniff out truffles which produce a chemical almost identical to a sex pheromone found in male pig's saliva. Men secrete the same chemical in their underarm sweat.

• Giancarlo Zigante and his dog Diana found one of the largest truffles in the world near Buje, Croatia. The truffle weighed 1.31 kilograms and has entered the Guinness Book of Records.

• The ancient Greeks thought truffles were made when lightning hit damp soil.

• The record price paid for a single white truffle was set in December 2007, when Macau casino owner Stanley Ho paid 330,000 USD for a specimen weighing 1.5 kilograms (3.3 lb), discovered by Luciano Savini and his dog Rocco. One of the largest truffles found in decades, it was unearthed near Pisa and sold at an auction held simultaneously in Macau, Hong Kong and Florence. This record was then matched on November 27, 2010 when Ho again paid 330,000 USD for a pair of white truffles, including one weighing nearly a kilogram.