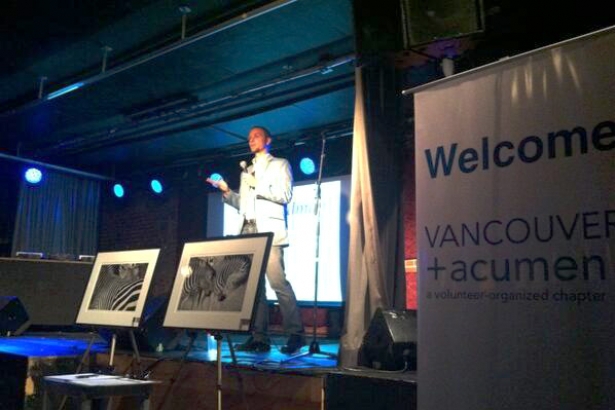 This is what I learned from DIGNITY 2013, an event put on last night by Vancouver+Acumen to raise money for Acumen – arguably the world’s foremost practitioner in impact investing.

Social entrepreneurs are different. Our mothers like to tell us that we’re all different, special, unique. But once you meet a few people, you come to realize that this isn’t quite true.

I find that the key to uncovering whether a person is, indeed, “special” is to ask them one simple question: “What do you do?”

The average person gives you a one-line plug consisting of their job title and job description. Social entrepreneurs don’t do this.

I asked this question a lot last night at DIGNITY. The most common response I got from this room full of accomplished social entrepreneurs? They laughed at my question. Then they proceeded to tell their story.

You see, the question “What do you do?” doesn’t make sense to a social entrepreneur. This is because it’s not what they do.  It’s who they are.  They are doers.

This explains why so many laughed: because, to them, this question is personal. It’s probing into their very nature and fundamental identity. To them, I’m not simply asking, “What do you do?” I’m essentially asking, “Who are you?”

Imagine if a complete stranger came up to you and asked, “Who are you?” You’d laugh, too. And then you’d tell your story. I heard a lot of stories last night.

Whether it was the story of Vancouver+Acumen’s co-chair, Raseel Sehmi, explaining the inspiration behind DIGNITY: “It’s more than just a fundraiser…People come here because they’re aligned with what we’re doing…I’m not a money person. I want people to leave having been inspired to act.” Action. Doing. Inspiration. These are the operative words of a social entrepreneur. Talk is cheap. Make it happen.

And she did. Sehmi, along with fellow co-chair Mark McCoy, raised thousands of dollars for Acumen last night. But in the typical fashion of social entrepreneurs, there was a unique and inventive twist to their method of fundraising. They held a mentor auction. This means that DIGNITY’s fundraising efforts will end up spurring further action and social change efforts, as bidders at DIGNITY will be partnered with an established Vancouver-based social entrepreneur who will mentor them on how to make their ideas for social change a reality. Action. Doing. Inspiration.

I also got to hear the story of Joel Solomon, who is Chairman of Renewal Funds (Canada’s largest social venture capital firm) and a founding member of Social Venture Network. Solomon was auctioned off as a mentor at DIGNITY last night, and gave a moving speech at the event.

Solomon’s story began with a diagnosis of polycystic kidney disease in his early twenties. He told me that his father died of this disease, and that it was fatal until dialysis was invented several decades ago (and then kidney transplants more recently). He told me – a complete stranger whom he had never met before – that one of his most significant influences was “thinking about my death,” and the fact that “I was living on borrowed time.” He told me that at 18 years old and at 35 years old he tried to speak on stage, froze both times, and had to walk off stage. But then, he told me with a smile, that last year he gave a speech at TEDx Vancouver in front of thousands (and thousands more on YouTube). He told me that, “we don’t need people to talk about it. We need people to do it.” Today, Solomon has directed over $100 million (and influences billions) for investment in social enterprises that make the world a better place. Social entrepreneurs are different. (Here’s a link to Solomon’s TED talk, I recommend it to everyone.)

There were countless stories of action, doing, and inspiration last night at DIGNITY 2013. But the main message was this: the title of social entrepreneur is not exclusive to an elite few. You do not need a certificate or an advanced degree or a million dollar trust fund. You do need to be different. You need to possess the dogged perseverence to find your passion or cause, the audacity to do it, and the ability to tell your story.

To slightly alter a quote from renowned storyteller George Bernard Shaw: “Some men see things as they are and ask why. Social entrepreneurs dream things that never were, and ask why not.” The key is to know when to stop dreaming and start doing. As DIGNITY 2013 showed me, there's no better time than today.