An interview with Rob Greenfield, Dude Making a Difference 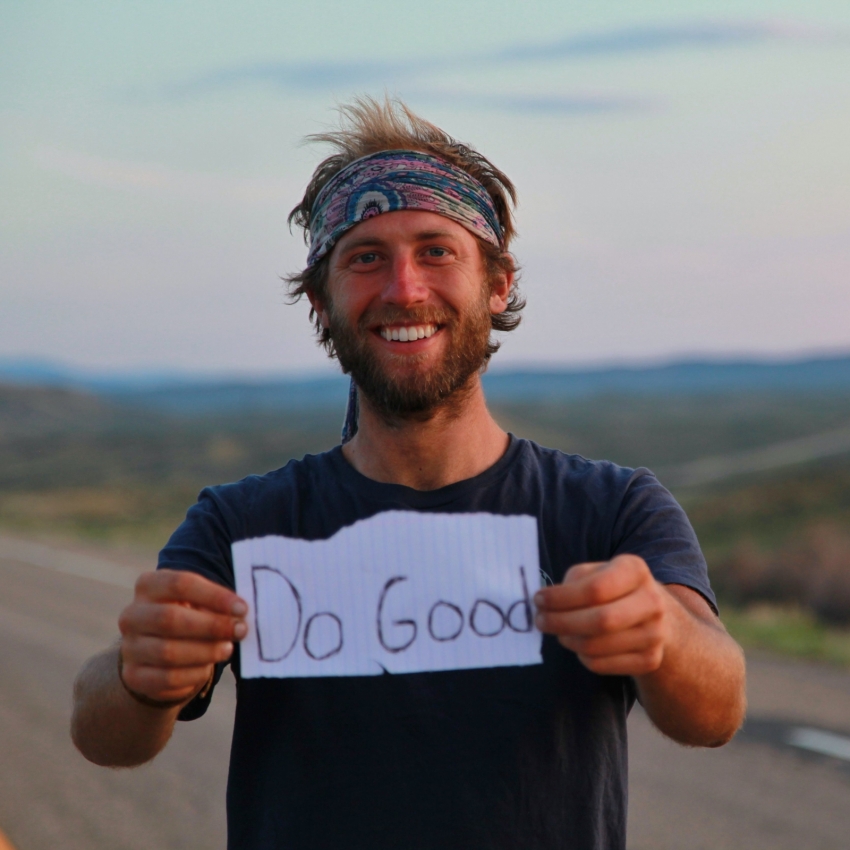 Most of us recycle and use high-efficiency light-bulbs. Some of us bike to work and grow vegetables at home. And then there’s Rob Greenfield. The 29-year-old American has gone to great lengths to reduce his impact on the environment, from eating wasted food to going a year without showering. While his life choices might not work for everyone, there’s a lot we can learn about his adventures in living lightly. With the costs of food and other essentials on the rise here in Canada, anything we can do to reduce our consumption and re-use what we have is a welcome pursuit. I recently had the chance to ask Rob about his life’s work.

Q: You’ve become recognized for dumpster diving across America. You uncovered the wasted food thrown out by grocery stores and staged “food waste fiascos” where the bounty you discovered was on display. Why did you decide to start dumpster diving? What were the results of your efforts?

A: I actually started dumpster diving on my first bike ride across America. I was crossing the country with the aim to leave as little of an impact as possible so I had committed to only eat food that was local, organic, and unpackaged.

The exception was, I could eat food that was going to waste. So while crossing the Sierra Nevada Mountains, I went behind a grocery store and I was blown away by the quality and quantity of food that I found in the dumpster. It took me a little while to get past the social stigma of dumpster diving, but from nearly that point on I’ve been raising awareness about how much perfectly good food is being thrown away. The result is thousands and thousands of people who have become aware of the issue and many people who’ve taken action on it.

Q: What’s the single most amazing thing you found in a dumpster?

A: It’s so impossible to come up with that because I am just consistently blown away by the massive quantities of the food I find as well as the quality. Just imagine going grocery shopping, filling up an entire cart full of everything you want, and then just throwing it all away. That’s what it’s like in the dumpsters a lot of the time.

Q: You advocate for grocery stores to “donate not dump” excess or imperfect food. Here in Canada, movements to incentivise corporate food waste donation through tax credits have met with criticism from respected food security advocates who cite that donated waste food does not ultimately lead to sustainable and dignified food security. How have food charities and food security leaders in America responded to your advocacy? What’s your suggestion for a more equitable way to engage with food waste in Canada?

A: I agree with them to a large extent. We need to create a system where whole healthy foods are grown and distributed locally and only in the quantities needed. The first step is to reduce excess so that we don’t have all this extra food to waste in the first place. We produce enough food to feed nearly two entire American populations. Donating is important —but it’s not the number one most important thing for grocery stores to start doing. The greatest change will be created by reducing aesthetic standards so that all produce is eaten based on its nutrition rather than shape, colour, or size. I think growing food locally and supporting small farmers is utterly important.

Q: Some of your other activities have included going a year without showering, traveling across America without fossil fuels, and using water from only natural sources. What do you say to people who would find this way of life too challenging?

A: I intentionally do things that are very extreme to grab people’s attention. My message isn’t for people to be as extreme as me. My message is to make simple changes in your life to reduce your impact on Earth and live with more health and happiness. Instead of not showering for a year, just use water wisely at home. Instead of riding all the way across America on a bike using no fossil fuels, just ride your bike to work or school or take public transportation.

Q: What are your top three tips for how the rest of us can live a less wasteful life?

A: Grow some of your own food and make your own stuff. When you have a deeper connection to things you’re a lot less likely to waste it.

Buy unpackaged food such as fruits and veggies and anything in the bulk section health food stores or co-ops. This way when you’re done eating you won’t have trash to show for it.

Compost. This is one of the simplest ways to drastically reduce how much stuff goes into your garbage can.

My guide on how to live near zero waste will be super helpful for anyone who wants to learn more: www.robgreenfield.tv/waste

Q: What can urban food gardeners do to help reduce food waste?

A: As an urban food gardener, you are already part of the solution. You’ve already boycotted the wasteful globalized supermarkets and are connected deeply with the food you produce. Grow your own, share it with others, and inspire others to grow even more food!

Q: You have a new book, Dude Making a Difference, published by BC-based New Society Publishers. One hundred per cent of your proceeds are donated to nonprofits. What can readers expect from it?

A: It’s the story of my wild adventure across the USA on my bamboo bicycle where I lived a ridiculously low impact lifestyle. I used eighty times less water, created two hundred times less trash, burned six hundred times less fossil fuels, and used one thousand times less electricity than the average American. I found a lot of interesting and entertaining ways to do this and to inspire others to reduce their impact as well. It’s as much about the beauty of life though as it is about learning to protect our Earth.

Rebecca Cuttler is an urban gardening teacher, member of the Vancouver Food Policy Council and board member of the Environmental Youth Alliance. Join her on Roundhouse Radio 98.3 FM every Tuesday afternoon at 5:00pm for Fabulous Urban Gardens. She blogs about urban food gardening at http://abundantcity.net.