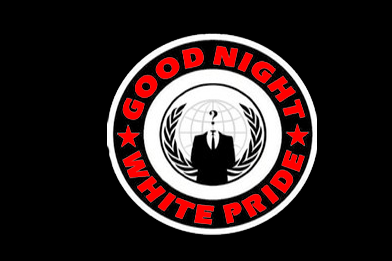 Hacker group Anonymous has taken action once again this week, this time in a widespread campaign against American neo-Nazi websites.

"Operation Blitzkrieg", as the attack was ironically dubbed, targeted specifically the sites of the American Third Position, an active political party espousing a doctrine that closely resembles fascist ideology and white nationalism. The site of Merlin Miller, the party's nominee for the 2012 presidential election was also attacked.

Several thousand personal emails as well as forum messages and personal information were posted by Anonymous under their logo and the words "Goodnight, White Pride".

In an issued statement, the hackers involved made claims that American congressman and presidential candidate Ron Paul was in contact with members of the American Third Position, apparently discovering a "disturbingly high amount of members [...] involved in campaigning for Ron Paul".

Members of Anonymous have in the past voiced both support and disagreement with Paul, videos under the collective identity being posted in his praise, as well as to threaten the disruption of the Iowa nominating caucuses should Paul come close to victory.

Anonymous operates as a collective, without any centralized authority or decision making system. Members of the group have described it as “nothing but an idea, an internet meme, which can be appropriated by anyone, at any time.” Therefore there is no unifying ideology or political leaning, and an attack which seems to bear such a political focus stands out.

Some fringe supporters of Ron Paul have even gone so far as to label it an "FBI false flag operation". Hashtags on twitter, meanwhile, link Anonymous' latest move with "antifa", an anarchist anti-fascist organization.

Regardless of the truth of the claims made about the GOP candidate, it highlights the inconsistency which is inherent within Anonymous, as well as the uses and purposes of such an entity.