Time to rip the mask of anonymity off online trolls 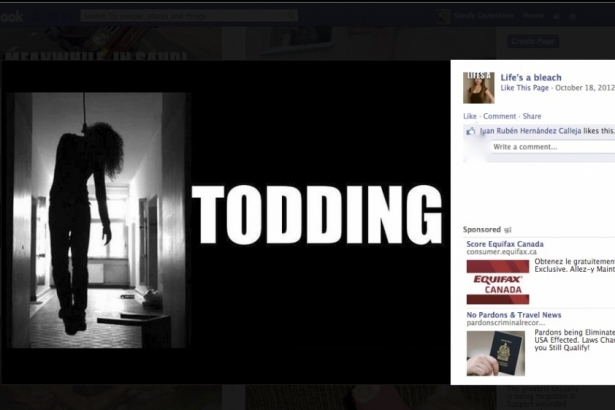 A screencap of a Facebook site that was still visible as of August 6, 2013.

“do us all a favour n kill ur self”

Fourteen-year-old Hannah Smith was bombarded with these messages on the teen social media site ask.fm. On Monday, she hung herself. As did Jessica Laney, Ciara Pugsley, sisters Erin and Shannon Gallagher, Joshua Unsworth, who were all swarmed by anonymous trolls on the Latvian-based site.

“Drink Bleach” exploded as a meme across the Internet following the Amanda Todd tragedy, infesting all of social media. To this day Facebook, now valued at $93 billion, hosts pages like the one pictured above, and this one and this one and on and on. 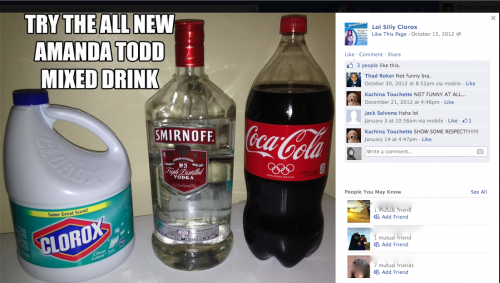 And kids aren’t the only ones. Women, LGBT and other minorities are commonly pelted with threats of rape, murder and urgings to kill themselves. It’s so commonplace that the police won’t even get involved just from a simple rape threat online. Go figure. 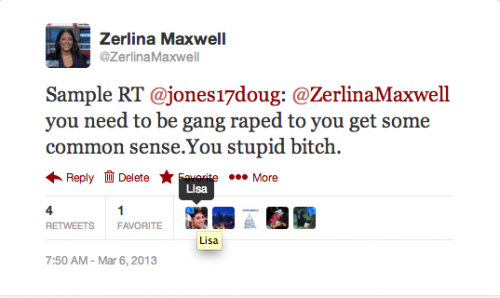 Unfortunately, the web is populated with a growing list of entrepreneurs like the founders of ask.fm. One of them is Mark Terebin, who remained cheerily sanguine on the subject of kids hanging themselves in the bathroom.

“It’s not about the site, the problem is about education, about moral values that were devalued lately,” he said.

He’s got one thing right. This is about moral values. His.

Paragons of virtue like Terebin are permitting trolls, predators and pedophiles to threaten the freedom of the Internet that once held such promise.

This isn’t freedom, it’s anarchy. And it’s got to stop.

No one in control

We can start by making an example of ask.fm. This despicable company should be frozen out, starting with its revenue stream. In May, Maryland’s Attorney-General Douglas Gansler asked that advertisers remove their ads from the site.

That would be a pretty good start, if our Prime Minister would echo the sentiment. Apple should remove ask.fm from iTunes. Search engines like Google and Yahoo should block the site, and so should ISPs and mobile providers like Verizon, Vodafone, Telus and Bell.  Same with Facebook.

But this problem is much more intractable than one site. All social media platforms are involved, and none of them have a handle on the problem.

Acute structural problems embedded in the social media business model and the Internet itself are involved. Until advertisers or government regulators like the CRTC force the issue, industry will keep wringing its hands and lecturing parents.

Three things that don’t go together

Here are three things that society never allows to blend in real life:

It’s hard to imagine a more deadly brew (picture a school over-run by masked strangers going room to room, rifling through kids’ files, asking for their cell numbers and home addresses). One of them’s got to go, and it’s probably going to be anonymity.

Anonymity has a prized place in the history of freedom of expression. It’s essential to freedom of the press, to whistleblowers and to members of persecuted groups addressing oppressive practices.

We must always embrace and protect it, but only when used as a shield, not a sword.

Anonymity is also the toxic life-blood of destructive trolls, predators and pedophiles who threaten the Internet freedoms we so rightly prize. Anonymity masked the swarm that attacked young Hannah Smith, the predator who blackmailed Amanda Todd, and the mob that threatened Caroline Criado-Perez and her family with rape and death.

Protection of children is paramount in any environment where they interact with strangers. Anonymity and kids just don’t mix.

Some things are basic: Social media platforms enabling contact with and between children and youth must verify the identity and age of users. Whether or not the identities are publicly posted is a separate question from independent user verification by the platform.

If social media sites used a PayPal style model to verify account holder age and identity (parents could verify for their kids), it would be like throwing water on the Wicked Witch of the West. Bots would disappear, and those who post rape or death threats, or who push others to suicide, would know their identities are no secret.