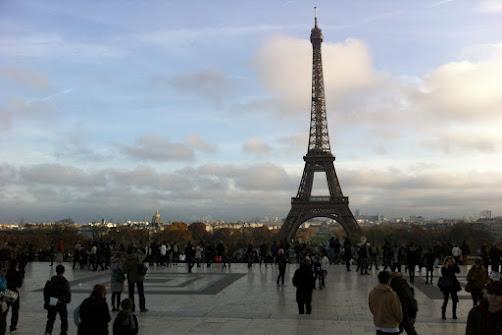 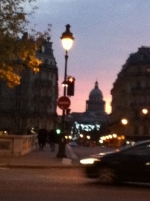 Ever since George Gershwin penned his symphonic rhapsody to Paris, “An American in Paris”, the city’s romance has included the sound of car horns. It’s also that very street chaos—vividly set to music—that’s led us to believe that Paris would not be the place for a non-Parisian to drive, much less cycle. I now know otherwise.

The first bit of magic in checking out your first Velib bicycle is the immediate heady sense of having elevated your status in Paris from generic gawking tourist to intrepid explorer. This elevated status is how I felt as I wheeled splendidly past the long tourist queues outside Notre Dame or the Palais de Chaillot (the best viewing area for the Eiffel Tower). Here are my three favourite journeys.

As generations of painters have discovered, there really is something about the light in Paris: how the sun strikes it, the balance of humidity to dryness, its latitude—something—I never saw a dull sunset while I was there. But after the sun goes down, there’s the other light—the one that’s inspired song writers and poets—how the city is lit at night. Each great monument is lit in a manner befitting its purpose. From Notre Dame to the Eiffel Tower, Paris by night is a stunning ride on a bicycle. 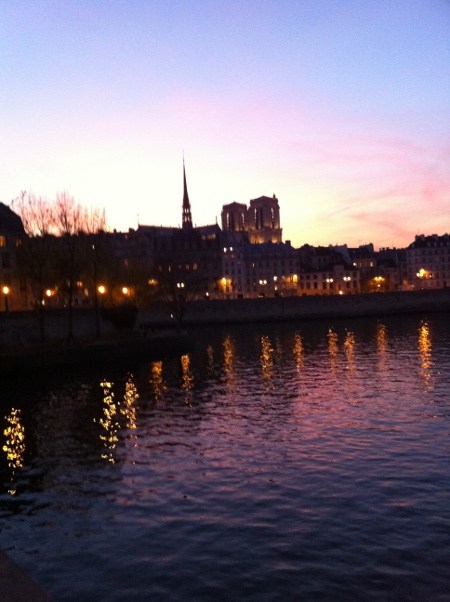 I caught the last glow of sunset silhouetting Notre Dame and reflecting into the Seine, as I peddled across Pont Louis-Philippe to Ile Saint-Louis—the lesser of the two islands in the Seine at Paris. It is home to (among many, many things) the Bertillon ice cream shop. It was described to me by a French expat living in Vancouver as the best in Paris with just the right inflection in his voice to imply, “and therefore the world”. I monkeyed about this ancient island of narrow streets and finally crossed over to the Rive Gauche proper in search of the Pantheon. 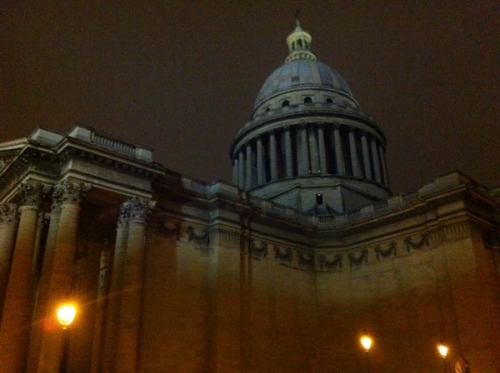 During daylight I’d seen the Pantheon from afar, but I wasn’t prepared for its forcefulness as it suddenly loomed out of the November night at me. Why the solemnity? The Pantheon serves as a mausoleum for France’s most esteemed citizens, including Voltaire, Rousseau, Victor Hugo, Alexandre Dumas, and more recently French citizens (Righteous among Nations) who defied the Nazi overlords to save many of France’s Jewish citizens. Such is the gravitas surrounding the Pantheon that it catacorners its own lighting into a greenish mist. Hushed, I rode on.

Flying along Boulevard Saint-Germain, I looked back to Notre Dame; its lights by contrast are regal. The cathedral rests solidly, but its lights draw your eyes heavenwards. Across the Seine the Grand and Petit Palais are dazzling seen from across Pont Alexandre III, a bridge so self-indulgently adorned with belle epoch street lamps, it risks plowing into the river just from sheer neo-rococo fabulous-ness.

Finally, after several detours and equipped on my third Velib bicycle of the evening, I rounded the corner onto Champ de Mars and come upon the most famous landmark of all: the Eiffel Tower. I think it’s been through many lighting adaptations over the years, but currently it glitters like the night sky itself. Thousands of white lights flank its sides and some twinkle like stars or light on lamé. Even at night, tourist queues abound, but I ride under the right under the tower and back to my Marais apartment through the safe and thrilling night streets of Paris. Not bad for a Tuesday night bicycle ride. 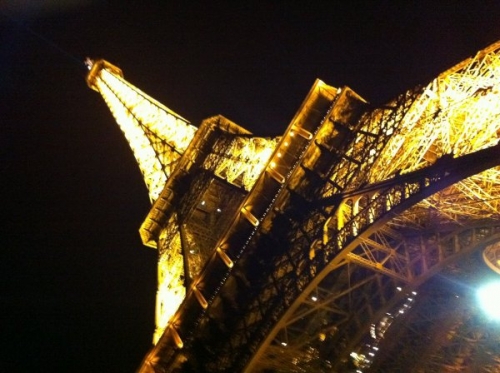 It was a brilliantly sunny day; the pale blue sky seemed appropriately medieval. Even with Google maps and a detailed map of Greater Paris, I was quickly getting lost in time.