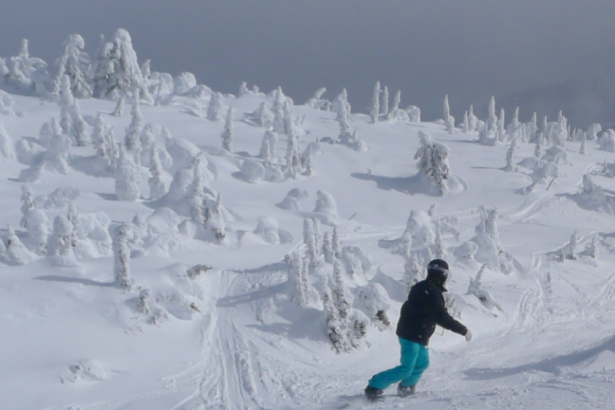 Light and fluffy. Those are the first two words that spring to mind when describing the ski experience at Big White, located in the Kootenay Boundary region of British Columbia. An epic extra-long weekend of skiing, and I end up describing a teddy bear? Well, if I were really playing the word-association game with Big White, I'd also come up with:

Those will all make sense by the end of this article, I promise.

Getting There and Away

Getting to Big White is easier than Google Maps suggests. If you’re driving from Vancouver, you only make three turns in the entire drive. The rest is just following the signs. If you leave before rush hour, you can pull into Big White five hours later; even if you stop for fuel and something to eat.

Make sure your vehicle has snow tires. Failing that, bring chains or cables. Most of the drive is very easy, and once you get past Abbotsford, it’s quite beautiful. Past Merritt, though, you’re much more likely to encounter snowy road conditions. If the road hasn’t been cleared or heavily trafficked, then your journey becomes much less safe, especially if you’re in a compact car.

Past Kelowna, you can expect snow on the road, especially after the turnoff from Highway 33 to Big White itself. Most of the time, it’s doable at low speeds with all-weather tires, but you really don’t want to have to turn back after driving all that way, right?

You can also fly into Kelowna, and rent a car for the rest of the journey. However, only if you score a really sick deal will that option be cheaper than driving. Canada's internal flights are ridiculously expensive: if there are two or more of you, flying is guaranteed to be at least double the cost of the drive, even if you'd be renting a car in Vancouver anyway. Just saddle up and split the driving if you must.

Accommodation in Big White is clustered around the chairlifts. Ski-in/ski-out is the norm. My group was able to launch directly from our back door and onto a cat-track toward the Ridge Rocket Express. Total ski time: under 120 seconds.

Accomodations are fairly centralized, if not right in the village itself. The quality of accommodation, from what I've experienced, is high. Private hot tub FTW.

One big caveat: do your grocery and booze shopping before you arrive. Shop in Vancouver or Abbotsford; or stop in Kelowna or West Kelowna. Big White is somewhat isolated, and the lone grocery store/bottle shop is predictably expensive: beer was nearly double the price of what you'd find in Vancouver. This irks Canadians, and would give visiting Americans heart palpitations.

(If stopping in Kelowna, be aware that the parking lots are huge and confusing. I can navigate Bangkok and Phnom Penh on foot, but took more than one wrong turn in a mega-stripmall car park. Leave a trail of breadcrumbs if it helps.)

The Skiing and Riding

For those used to skiing and boarding at Whistler Blackcomb or Vancouver’s local mountains, you’re in for a treat. And a shock. Big White’s slogan is “It’s the snow”, and it really is the snow. Light and fluffy, like I said. You don’t end up sliding down sheets of ice once the sun emerges and hides. Instead, pour yourself a sparkling glass of Champagne powder and enjoy. This also means that you must be extra-vigilant of treewells.

Lift ticket prices aren't cheap: $77 per day, with slight discounts for multi-day passes. So, pricier than Cypress, cheaper than Whistler.

If you’re a sidecountry/slackcountry enthusiast, then you’ll instantly fall in love with Big White’s glades, particularly the Black Forest area. The trees get as tight as you can handle, sometimes even tighter. The glade experience at Big White ranges from a relaxing jaunt through a few trees to getting attacked by a bunch of Ents.

Also, if you like the steeps, then you won’t be bored. If your steep-pitch turns aren't dialed in, they will be by the time you're done at Big White.

Also, each chairlift tends to be served by several established runs. This means that skiers and riders aren’t corralled onto overcrowded superhighways, forced to battle it out for the best lines. This also means that snowboarders can indulge in the jibbing that they so dearly love, as you can see... 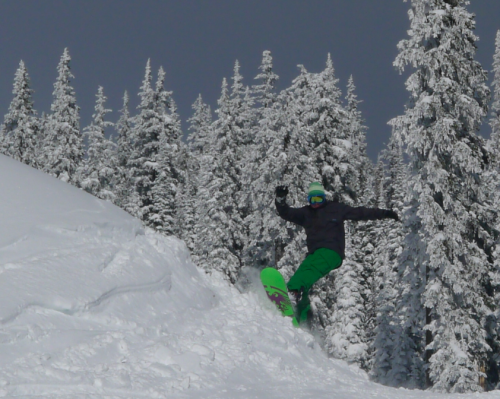 Like Whistler, Big White absorbs crowds pretty well, but you'll probably never experience a truly crowded day. The only choke point I saw was the lift-ticket queue at the Ridge Day Lodge. We never waited more than five minutes to get on a chair. Once off-piste, we rarely saw another soul. Take that as a caveat, though, as you contemplate racing through the trees.

Are all of Big White's lifties Australian? Don't be silly... of course they are.

As for the food, it's pretty standard ski-area cuisine... except for the pierogi hut. Ask around and seek out the finest and most simple ski-lunch you'll likely ever have. Hyperbole? I'd argue otherwise.

The Weather at Big White

The weather at Big White changes quickly, as you should expect in the alpine. Behold, the beauty of a bluebird day at Big White...

Where to stay in Victoria, British Columbia: The Delta Victoria Ocean Pointe