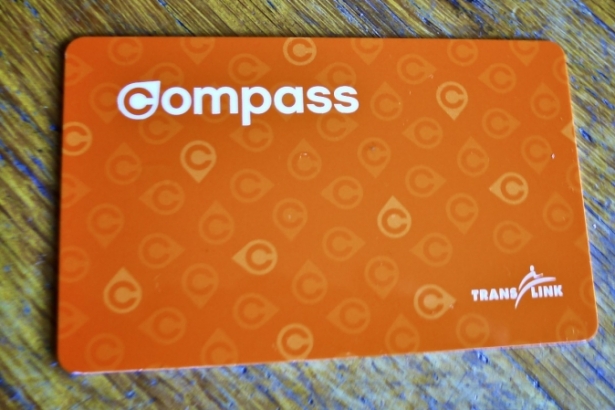 I have been using similar cards for nearly a decade already; London's Oyster Card launched in 2003. I was looking forward to seeing if Vancouver's transit system could ease into RFID-based fare systems more smoothly than did Melbourne, whose Myki rollout was a slow-motion tram-wreck.

Let's look at how the Compass card works, how a commuter is supposed to use it, and what happens when it's intentionally misused.

Tap on, tap off

Stepping onto the #99 B-Line, I tapped my orange Compass card for the very first time. Wa-hey! The screen came to life, affirming my Compass card's validity in a curt yet polite manner.

It worked. My brief beta-test experience in Melbourne, back in 2009, involved a lot of dead Myki readers, so this was a pleasant change.

The orange Compass cards used in Vancouver's beta test are loaded with $100 in concession fares, as though the user were a student. Some beta testers are using mock monthly passes, but not me. Each single-zone ride will cost $1.75 in imaginary money; the beta tester must pay his or her own fare while testing Compass, which I think is bogus. Anyway, as you can see, the commuter's remaining fare is not displayed as he or she taps on.

There are arguments to be made for and against such a UI choice, but I'd argue it was a poor decision. We like to see how much money we have left on our cards. I can't recall ever using a system that behaved otherwise until my first Compass tap.

Upon reaching my destination, I tapped the Compass sensor on the way off the bus. 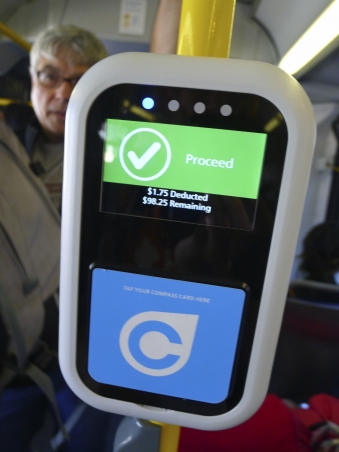 Okay, now we see the fare deduction. A buck seventy-five, as expected. I was a bit... disappointed. As a beta tester, I kind of like it when things break. It gives me that raison d'être.

Now that I asserted the simple tap-on tap-off as working correctly, it was time to test the time-limit aspect of TransLink's fare system. Once you validate a journey, the ticket is usable to enter a public-transit vehicle for 90 minutes. I hung around West Broadway and Granville for a few minutes and hopped a B-Line going the other direction. I tapped on and was greeted with the green "Proceed" screen, but, since there's no numerical info displayed, I wouldn't know if I was charged for an additional fare or not until I exited the bus. As it turns out... 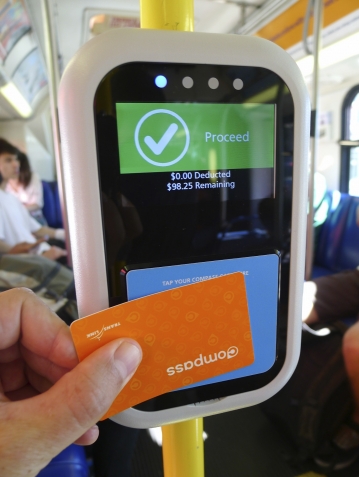 So, all good. So far, I had been a good boy, tapping on and off just as I was told. Where's the fun in that, though?

Wherever the road takes me

The next test involved a one-way journey to the end of the line. Once my 90 minutes of valid fare were up, I waited for an eastbound #84 to pull up. The doors hissed open, I stepped aboard, tapped on, and promptly left the bus. The driver looked at me quizzically. I smiled and waved. The driver shrugged and closed the doors. The bus pulled into traffic and my electronic journey was underway as my physical body went to the gym. Presumably my Compass card would be charged the maximum possible journey price, i.e. a three-zone trip. Whatevs, it's fictional money.

Car2go migration patterns in Vancouver: Where did the Smart Cars go?

Over 5,000 call on TransLink to stop double transit fee