The latest round of recommendations for the viaduct teardown plan include affordable housing, green space, and traffic management. 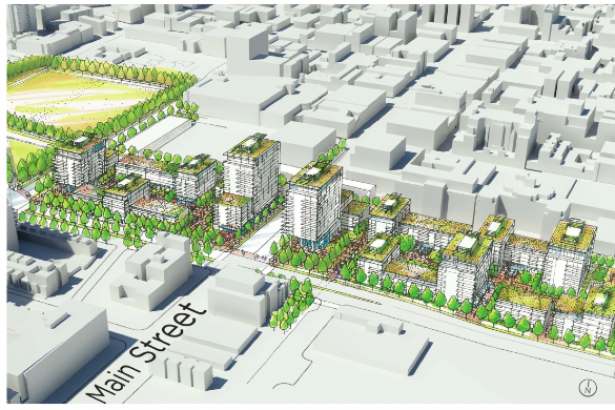 Main Street minus the viaducts (image from June 25, 2013 recommendation)

Is this our viable viaduct plan?

We just got an email from Mayor Gregor Robertson's office regarding the Seymour and Georgia viaduct teardown plan. A new report was submitted on June 18 and discussed today. It includes diagrams showing a 13% increase in parkland (replacing those fugly wastelands beneath the viaducts) as well as the start of traffic-management measures for vehicles following the new route into the city centre.

This is not the green light: it's only the plan to do more planning. Robertson's office writes that a final decision is not expected until June 2015. Hey, redesigning what amounts to generations of arguably-shortsighted urban development is no simple task. The teams involved in the viaduct project must consider the city's future growth and changes, and does want to not have to go through all of this again. Ever.

You can wade through all 73 pages; it's more interesting than it sounds. Below, I'll quickly highlight a few key elements.

So, are we getting affordable housing?

Will the dream of affordable housing be realized in Strathcona and Chinatown? The short answer looks to be "Yes", but the longer answer is "Yes, but."

Removal of the viaducts creates nearly 7 acres of land between Quebec and Gore Avenue which can be utilized to achieve the City’s targets for new affordable housing units. Conceptual planning of the two blocks between Quebec and Gore Ave identified an opportunity to provide approximately 850,000 sq ft of residential and commercial uses, representing about 1,000 housing units, of which a minimum of 200 - 300 (20%) were assumed as affordable non - market housing

The above quote (from page 9) refers to housing amenities on the city-owned blocks which will be exposed to daylight once the viaducts are scrapped. "Were assumed as" will not be taken as "will be guaranteed as", which affordable-housing advocates will have already noted. Besides, even 300 is a fairly tiny number in the face of the rapid and widespread gentrification of the Eastern Core.

As you can see from the map below, though, the City of Vancouver owns a pretty small (but important and historic) slice of the land involved in the Great Viaduct Transformation. 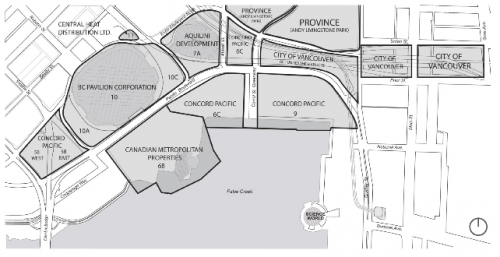 That map translates to "another round of meetings with the companies that own the real estate adjacent to the City's holdings." Yes, this raises the spectre of more podium towers. Someone's gonna say it, so I'll just get it there first.

Besides, part of the overall viaduct plan accommodates for the sale of City-owned land to developers, as noted in Page 32 of this report.

Reading that page, my initial thoguht was, "Wow, the City must choose whom it wants to piss off: real estate development firms or people who want to keep living close to downtown Vancouver."

As mentioned above, the latest proposal includes an increase in green space, uniting Andy Livingstone Park, the Creekside Park Extension, and the skate park, as well as parkifying that byzantine area under the viaducts that looks like something out of "The Warriors". 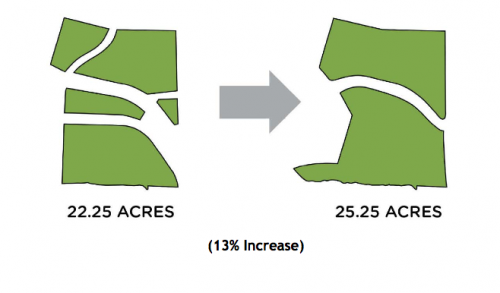 As Director of Transportation Jerry Dobrovolny mentioned at the Board of Change presentation last week, those hoping for a Vancouver High Line will have to live with disappointment: the City won't commit to the costs of converting and maintaining an overpass park.

But before you even think about it...

Do NOT spit @ #Vancouver Dir. of Transp. Jerry Dobrovolny. It's uncouth & counterproductive (& he can kick your ass).

Also, the City will have to go to court over Andy Livingstone Park: Vancouver only holds a 999-year lease on the land, the terms of which do not allow roads being built through it.