Banks will get cheaper access to US dollars to bring down their own costs. 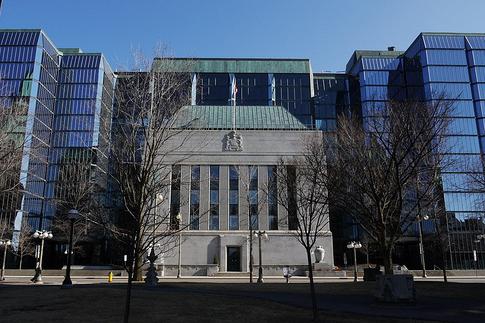 Photo of the Bank of Canada courtesy of Creative Commons.

The Bank of Canada has joined an alliance of five other international central banks to co-ordinate efforts to quell the ripple effects stemming from Europe's burgeoning debt crisis.

Critics of banks are angry at moves to expand currency-swap lines and lower the cost of emergency U.S. funds as efforts to provide more wiggle room. They'd rather see preventive resolution measures to soften the threat of a international financial fallout.

OTTAWA -- The Bank of Canada and five other central banks have launched what appears to be a pre-emptive strike to head off a new global credit crunch that could trigger a second recession.

In a surprise move Wednesday morning, the European Central Bank, the U.S. Federal Reserve, the Bank of England and the central banks of Canada, Japan and Switzerland said they will make it cheaper for banks to access U.S. dollars.

Analysts said the move was targeted at beleaguered European banks, which have been seeing their costs for acquiring funding in U.S. currency rise four-fold.

Each day, banks in Canada and around the world lend billions of dollars to each other, which then is used to lend to consumers, businesses and others who need cash for purchases, investments and other uses.

But there's growing fears the European debt crisis will force them to take tens of billions of dollars in losses on the bad government debt they hold. That has made it hard for them to raise money in financial markets and could worsen a looming recession in Europe.

The joint statement said the central banks will reduce the cost of temporary dollar loans to banks, called liquidity swaps, by a half percentage point starting Monday.

There is no such financing difficulties in Canada, the Bank of Canada was careful to point out, adding that it was "prudent to have these arrangements in place.''

Canadian banks are lending normally to consumers and businesses, although some borrowers are finding it harder to get money. Interest rates remain near historic lows.

The move is reminiscent of co-ordinated efforts by the same central banks in the fall of 2008 to bring down interest rates and increase cash in the financial system, through among other means asset swaps with financial institutions in return for central bank funding.

The actions were only partly successful. Credit did dry up in many parts of the world, including Canada, for all but the most credit-worthy businesses and households. That triggered a global recession across most advanced countries whose legacy still troubles most economies.

TD Bank chief economist Craig Alexander said Wednesday's action is different from 2008 in that it creates an insurance against possible difficulties, rather than being a reaction to an existing problem.

"I think they are doing this in a precautionary way,'' he said. "The global financial system doesn't need access to increased liquidity at this time, but if Europe did lose control over their fiscal crisis and it did result in a major banking crisis in Europe, it would create (a credit freeze) like in 2008.''

Alexander said he believes European banks can benefit from the liquidity now, but others, particularly banks in North American, have access to funding.

That is the positive way of looking at matters, agreed Derek Holt, Scotiabank's vice president of economics, but there is also a darker interpretation.

"The other totally different take is that somebody knows something they are not telling the markets. When you get China cutting reserve ratio requirements and globally co-ordinated action across other central banks, you wonder about the risk of the next shoe to drop,'' he said.

Global markets have been keeping their fingers crossed for several months that the worst outcome would not materialize, wildly fluctuating between extreme pessimism and hopefulness.

Optimism was in vogue Wednesday after the announcement. Stocks surged everywhere: Germany's DAX was trading 4.7 per cent higher; France's CAC was up 4.1 per cent; Dow futures in New York rose 2.2 per cent, while the Toronto Stock Exchange index soared over 300 points, almost three per cent.

The possibility that one or more European governments might default on their debts, taking some European banks with them, has already begun to tighten credit conditions and slow interbank lending, leaving European banks dependent on central banks to fund their daily operations. Other banks are wary of lending to them for fear of not getting paid back.

That is the scenario that unfolded in 2008 and central banks want to get ahead of the events, just in case, analysts said.

Interbank funding in Canada has remained mostly flat since July and at lower spreads that those in Europe, U.K. or the U.S.

In announcing the measures, the Bank of Canada said it was extending its US$30 billion swap facility with the U.S. Fed set to expire next August to Feb. 1, 2013.

"The Bank of Canada judges that it is not necessary for it to draw or offer operations on any of these swap facilities at this time, but that it is prudent to have these arrangements in place,'' it said.

Aside from greater access to liquidity, the banks also said they are taking steps to ensure banks can get ready money in any currency if market conditions warrant by establishing a temporary network of reciprocal swap lines.