Economists say signs are hopeful for deal, but worry remains. 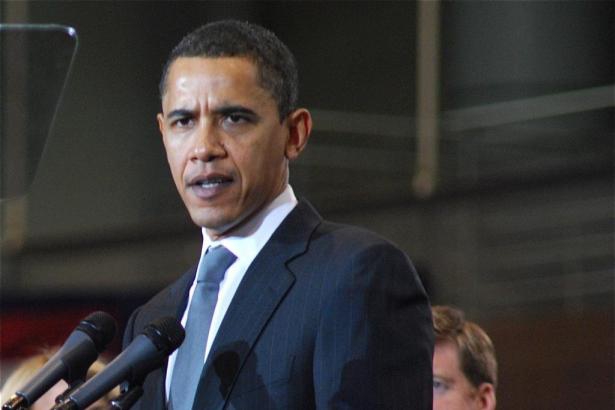 Photo of US President Barack Obama courtesy of Wikimedia Commons.

With high-stakes talks under way in Washington over what it will take for legislators to agree to raise the US debt ceiling, Canadian economists are watching carefully.

The outcome will affect this country too, they say -- and badly, if a good deal isn't struck soon.

WASHINGTON -- U.S. President Barack Obama struck a positive note on Thursday as he strode into the White House briefing room to say progress was being made in talks with congressional leaders to raise the country's debt ceiling.

Democrats and Republicans both agreed in a White House summit "that we have to get this done before the hard deadline,'' Obama said, referring to the need for a deal on the country's US$14.3 trillion debt ceiling by Aug. 2 to avert a financial calamity for the United States.

Even though Obama said there's a long way to go to break the stalemate between Republicans and Democrats, the sighs of relief among those in the American financial industry were practically audible -- but economists in Canada are also watching closely, fearful of what it might mean north of the border if the U.S. defaults on its debt.

"This has never happened before, so the really scary element is that we have no idea how bad it could be,'' James Marple, a senior economist at TD Bank, said in an interview on Thursday.

"We just know that the entire global financial system is based on the safety of U.S. treasuries. It would throw into chaos the entire system upon which financial assets are priced ... It's fair to say that the projections that this would be a Lehman Brothers-type fiasco, or worse, are accurate.''

Lehman Brothers Holdings, a global financial services firm based in the U.S., declared bankruptcy in 2008 in a filing that played a major role in the subsequent worldwide economic meltdown.

"The bottom line is there would be a lot of uncertainty thrown into global financial markets if the U.S. defaulted on its debt, and we really don't want to go down that road and actually experience it,'' he said.

Canadians would most certainly see long-term interest rates rise in the event that no deal is reached before Aug. 2, both economists said. That would drive up corporate borrowing costs, something that would negatively impact the Canadian economy.

"If the U.S. economy is at risk of another recession, the outlook for Canada would be downgraded as well,'' Guatieri said. "There would be financial contagion into Canadian equity markets; they would likely plunge if the U.S. defaulted.''

While considerable discomfort might be caused in Canada should the U.S. default on its debt and have its credit rating downgraded, both Gautieri and Marple point out the devastation would be far worse in the United States.

The White House says that if the debt ceiling isn't raised, the U.S. Treasury cannot pay the interest and principal on Treasury bonds, military salaries and retirement benefits, and could not even mail out individual and corporate tax refunds. All such payments would, in fact, be frozen.

Both Canadian economists were buoyed by Obama's optimistic tone as he announced debt talks would resume with congressional leaders over the weekend.

Republicans, Democrats and the White House are aiming to agree on a multi-trillion-dollar package that would both reduce the country's mammoth deficit and prevent the U.S. government from defaulting on its debts.

The talks are delving into a wide range of entitlement programs, including Medicare, Medicaid and Social Security, as lawmakers also try to find savings by eliminating countless tax loopholes for wealthy Americans and corporations.

"Staffs as well as leadership will be working during the weekend,'' Obama said. "I will reconvene congressional leaders here on Sunday, with the expectation that at that point the parties will at least know where each other's bottom lines are.''

By Sunday, he added, the group "will hopefully be in a position to then start engaging in the hard bargaining necessary to get a deal done.''

The talks have thrown all of Capitol Hill into a tizzy.

A Washington Post report that suggested the White House was willing to embrace cuts to Social Security, the cherished American entitlement program for retired citizens, caused consternation for congressional Democrats. House Minority Leader Nancy Pelosi was reportedly particularly miffed that she had not been consulted.

Progressive Democrats have long railed against the notion of slashing entitlement programs to reduce the national debt, just as Republicans have steadfastly refused to consider tax hikes. Economic experts have pointed out, however, that a mix of both tax increases and spending cuts are needed to make any significant dent in the debt.

As always in such tense and politically charged times, semantics are at play.

The White House denied on Thursday that its position on Social Security has changed.

"This story is really not news at all,'' White House Press Secretary Jay Carney said at the daily briefing after Obama departed the James Brady briefing room following his brief statement.

He added the president has always insisted Social Security is not a major driver of the deficit, but wants to "strengthen'' the program.

Republicans, meantime, insist there will be no tax hikes on the American people. Instead, they're looking to close loopholes that allow wealthy Americans and corporations to pay less tax every year -- something those individuals might regard as a tax hike.

The White House has warned that it needs an agreement by July 22, two weeks away, in order for Congress to pass legislation by the Aug. 2 deadline.

"There's nothing to be gained for anyone if they fail to raise the debt ceiling; it will be terrible for both parties. But there's an election year looming, and the Republican party has to try to win back independents and appease the Tea Party, so right now they have to make a strong stand. There's a lot of politics going on.''