New Jobs Act in U.S. will bar most northern suppliers from cashing in on stimulus spending. 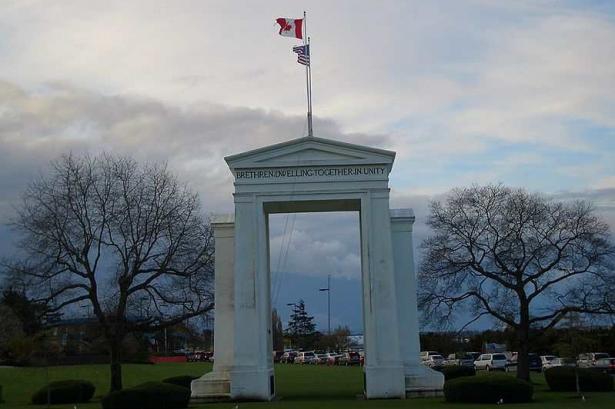 The Canadian Press has the story on the new American Jobs Act:

The act, released in full by the White House this week, contains yet another protectionist Buy American provision of the type that strained the Canada-U.S. relationship for much of 2009.

Those who closely watch the Canada-U.S. trade relationship were crestfallen to see Section 4, with its heading "Buy American -- Use of American Iron, Steel and Manufactured Goods.''

The section contains a directive that none of the funds made available by the American Jobs Act may be used for "the construction, alteration, maintenance, or repair of a public building or public work unless all of the iron, steel, and manufactured goods used in the project are produced in the United States.''

There are some exceptions, however. The act states that if using all-American products increases the cost of the project by more than 25 per cent, the requirement will be waived. So too if the goods needed for the project aren't manufactured or available in the U.S.

But a fair amount of time-consuming red tape must be hacked through in order to receive such a waiver.

Section 4 concludes by insisting it "shall be applied in a manner consistent with United States obligations under international agreements.''

At an event in Montreal on Tuesday, Gary Doer, Canada's U.S. envoy, and David Jacobson, the U.S. ambassador to Canada, faced a series of questions about the new provisions at a two-day Canada-U.S. manufacturing summit.

"They both wanted to wait to see what the exact wording was in the act ... it was certainly on their radar,'' said Jayson Myers, president of the Canadian Manufacturers and Exporters organization.

At the event, Jacobson even called the Canada-U.S. trade relationship the top item of international business in the American capital, saying "a huge amount of time'' is being spent on easing trade between the two countries at the highest levels of government -- including the White House.

Jacobson was referring to the long-awaited perimeter security deal, billed as an effort to boost cross-border trade and reduce congestion without compromising security.

"Particularly in my country, people understand that if we're going to move the needle on exports and on trade, and on jobs that are dependent on export and trade, we're going to have a lot more bang for our buck by focusing on Canada,'' he said.

In Ottawa, the prime minister's office wouldn't comment on the Obama administration's new Buy American provisions in detail except to stay the Canadian government will "continue to oppose protectionism and defend Canadian interest.''

Birgit Matthiesen, the U.S. representative of the CME, expressed her dismay about the provisions, given how hard Canadian officials worked two years ago to convince their American counterparts of the dangers inherent in hindering trade and commerce between two economies so closely linked.

"It's this de facto Buy American sentiment now that is so disappointing and frustrating,'' she said in an interview from Montreal.

"It's really disconcerting that this administration and the U.S. Senate seem to have decided that Buy America had to be inserted into this bill, ignoring our concerns that we've expressed so strongly previously and the reasons why we expressed those concerns.''

Maryscott Greenwood, an international trade specialist at the McKenna, Long law firm in D.C., predicted the bill will likely pass U.S. Congress in some form given the urgency of the job situation in the United States right now.

She added there's no guarantee Section 4 will be removed by either Republicans or Democrats with a presidential election a little more than a year away.

"I think some version of it will get through, and Canada will have to press for a waiver,'' she said.

"It means that Canadian business interests must remain vigilant in continually explaining to U.S. policy-makers the interconnectedness of our two economies,'' she added. "Canada needs to constantly point to the futility of measures that don't take the special bilateral relationship into consideration.''

The Buy American dispute consumed the Canada-U.S. relationship for much of 2009, until Canada finally earned an 11th hour waiver from the Buy American provisions contained in Obama's $787 billion stimulus act.

The deal allowed the use of Canadian products in many local U.S. projects funded by the stimulus program. In return, Canadian provinces agreed to sign the World Trade Organization's government procurement agreement, something they'd refused to do when the WTO was established in 1995.

That's the only bright spot, Matthiesen said -- Canadian provinces won't be excluded this time around from bidding on projects at the state and federal level in the United States.

"But if these monies get funnelled down to the municipalities and counties, then we have no protection, and the vast majority of money was spent at that level under the recovery bill,'' she said.

"Our work is really cut out for us.''