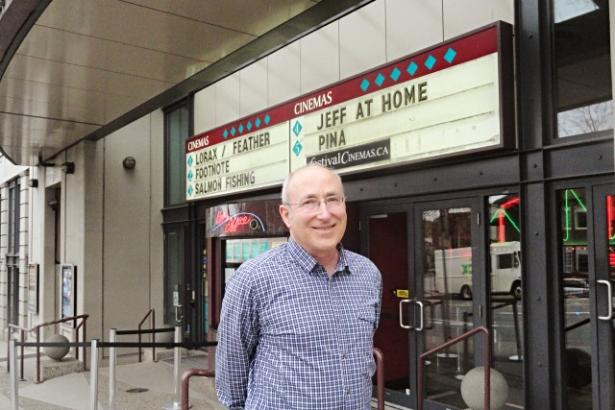 Stepping through the doors of Fifth Avenue Cinemas, a couple of movie buffs chat about a benefit screening for the homeless. No sign of Coca Cola or other bubbly soft drinks at the concession stand: just coffee, iced tea and fruit juice. Welcome to Festival Cinemas' premier theatre. Along with The Ridge and The Park, Fifth Avenue Cinemas has shaped Vancouver's film culture. The intimacy and thoughtful movie selection makes the Festival Cinema experience vastly different from the shopping centre mega-multiplexes that  have become the norm.

Festival Cinemas president Leonard Schein arrived on time, looking relaxed in a simple blue shirt and jeans. Schein's  influence on Vancouver has been towering. His capital is social and cultural. In addition to being president of Festival Cinemas (which operates The Ridge Theatre, Fifth Avenue Cinemas and The Park Theatre), Schein is the founder of the Vancouver International Film Festival and is chair of the board of directors of the Canadian Cancer Society – and his work for charities and social causes is legendary.

He spoke briefly about his recent “See Again” benefit screenings, which donates 100 percent of proceeds to SEVA Canada, a charity that helps prevent blindness and restore vision to people in developing nations. The screenings were threatened by Consumer Protection BC regulations, until Schein spoke out strongly in the press, causing the regulators to back off and allow him to show his films.

The incident highlights Schein's generosity toward charities and his tendency to speak out when he feels that something isn't right.

A life transformed by film

Schein's love of movies dates back to childhood in the 1950s. He was born in Los Angeles, home of Hollywood studios -- but it wasn't exactly a family tradition to go the movies on the weekend.

“My parents rarely went to the films. I think they did when they were single, but my dad worked six days a week as a truck driver. My mother was a housewife, busy with three kids," he said.

His parents may not have been avid cinephiles, but he became one early in life. With a movie theatre just three blocks from his house, the young boy and his friends often visited to see the latest releases.

Schein's eyes were opened to the power of foreign and independent movies  when he began studying at Stanford University. For a young man who had grown up watching studio films from the U.S., it was as though a whole new world had revealed itself to him.

“When I went to university, on campus, they used to show films every night – just 25 cents for students,” he said. And the 1960s was a golden age for foreign film directors, with legends like Fellini, Kurosawa and Bergman at their peak.

“Film allows us an exposure to another culture, another country more easily than any other medium,” Schein said. “Of course, books do it as well, but if you read, you imagine what someone looks like, or where a beautiful nature scene takes place. But with movies, you actually get to see the physical space of another country.”

The war in Vietnam – something that Schein had strongly opposed – brought him to Saskatchewan for two years, then westward to Vancouver in 1973. Even though he was working in education at that time, he immediately noticed the lack of options in the city for movie-goers.

“We had two chain theatres here, Famous Players and Odeon Theatres at that time, and they only showed Hollywood studio films,” he said. “This was before video, and you just couldn't see many great films in Vancouver.”

Independent theatres like The Rio on Commercial Drive were showing Chinese and Asian films at the time, but for a culturally specific market.

Schein made a leap of faith and took over The Ridge  in Kitsilano in 1978 – a risky move for a man who had spent much of the last decade teaching psychology at various post-secondary institutions, including Capilano College, Douglas College and Vancouver Community College.

“It was hard to leave teaching college,” he admitted. “You're tenured, you have summer vacations, it's steady.” He nevertheless put down $35,000 for the theatre to realize his goal of bringing great films to audiences in Vancouver.

Under Schein's direction, The Ridge not only survived, but flourished – it showed movies that no other theatre in the city did.

Yoyomama.ca helps urban mothers with the ups and downs of parenthood

Success: Why and How
Sandy Huang