Baloney Meter: Did the Conservatives really pay down $37B in debt?

The Canadian Press' fact-checking system rates Conservative budget claims at a four out of five: "a lot of baloney." 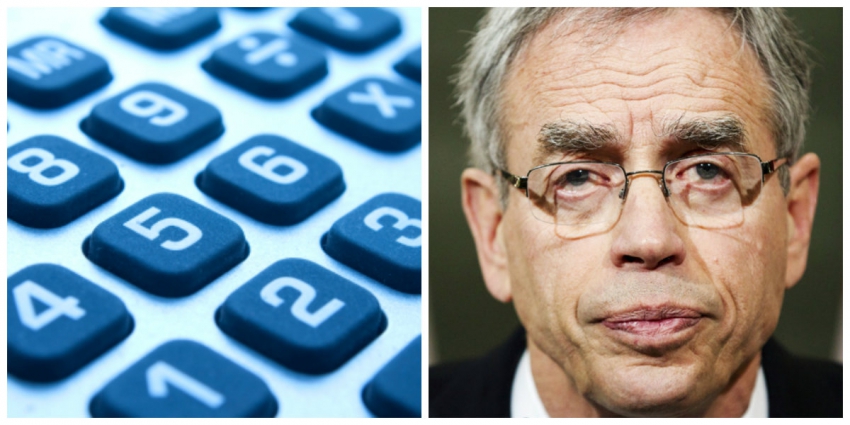 OTTAWA — "When our government first came to power, we worked hard to reduce Canada's substantial federal debt. We did it in short order, by more than $37 billion." — Finance Minister Joe Oliver's budget speech to the House of Commons on April 21.

Oliver spent a good portion of his speech in the House of Commons selling the merits of budgetary balance and the perils of debt, while castigating the economic credentials of his opponents.

Oliver even quoted Spanish philosopher George Santayana: "Those who cannot remember the past are condemned to repeat it."

So is Oliver fairly characterizing the past when he says his government worked hard to reduce the national debt by more than $37 billion in its first years in power?

Spoiler alert: The Canadian Press Baloney Meter is a dispassionate examination of political statements culminating in a ranking of accuracy on a scale of "no baloney" to "full of baloney" (complete methodology below).

This one earns a rating of "a lot of baloney" — the statement is mostly inaccurate but contains elements of truth. Here's why.

The national accounts show that when Canadians elected a minority Conservative government in January 2006, the national debt stood at $494.7 billion.

There is no question the national debt decreased during the Conservatives' first two full years in power, falling to $457.6 billion in 2007-08 — a reduction of just over $37 billion from the day the government was sworn into office on Feb. 6, 2006.

On Feb. 23, 2005, the minority Liberal government of the day delivered its ninth consecutive balanced budget.

Then-finance minister Ralph Goodale forecast a minimal surplus that was widely understood to be — and criticized for — understating the true size of the anticipated surplus, due to a $3-billion contingency reserve and the government's "prudent" assumptions on economic growth and revenue.

The opposition Conservatives, led by Stephen Harper, initially expressed support for the Liberal spending blueprint but ultimately voted against it in May 2005. That November, the Liberal fall economic update predicted a surplus of $4.6 billion for 2005-06. Their government was defeated shortly afterwards.

Harper was sworn into office on Feb. 6, 2006. The House of Commons began sitting on April 3, and the Conservatives delivered their first budget, for fiscal 2006-07, on May 2.

As in every year, it was not until the autumn of 2006 that the final accounting of the previous fiscal year was complete.

By 2008-09, the federal government was back in deficit, recording a $10 billion shortfall.

"We were elected and in government when the (2005-06) surplus occurred, the debt repayments happened after and were a decision of our government," Melissa Lantsman, a spokeswoman for Oliver, said in an email to explain the $37-billion debt repayment claim.

Any surplus after the fiscal year-end must go toward debt, but Lantsman said the Conservatives acted responsibly by resisting the urge to go on a spending spree before March 31, 2006 (and before the first session of the 39th Parliament had even convened).

"We did not engage in any reckless spending, as we promised not to."