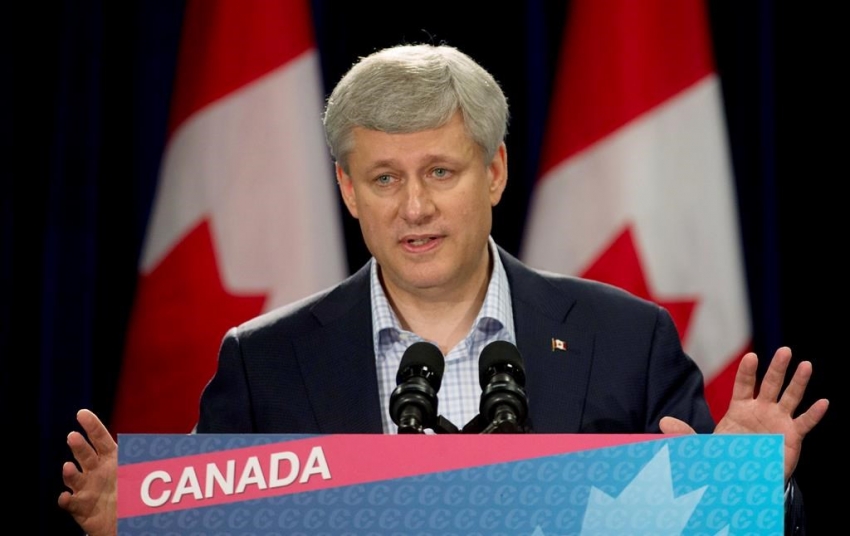 Hardly surprising, then, that the three main federal leaders found themselves using the province's ailing manufacturing sector as a backdrop Wednesday for a one-day clash of economic visions.

Stephen Harper, Justin Trudeau and Tom Mulcair all focused their campaigns in southern Ontario's manufacturing heartland, where one of the country's most powerful economic engines has been sputtering for years.

Harper spoke for nearly an hour in a controlled question-and-answer session with the Ontario Chamber of Commerce, one of his favourite public event formats for burnishing his credentials as an steward of the economy.

Harper fielded a series of soft, policy-laden questions as he attacked the economic bona fides of both the Trudeau Liberals and Mulcair's New Democrats.

"I will tell you this right now, looking at Ontario, looking at Alberta ... if we get a high-tax Liberal or NDP government federally that will be absolute disaster for this country," Harper said in Welland, Ont., to partisan applause.

In Niagara Falls, Mulcair made a five-year, $90-million spending pledge for the federal automotive supplier innovation program. "It's time to get good-paying auto manufacturing jobs back to these communities," he said at an auto parts factory.

But Mulcair continued to face pressure to explain how he would balance next year's budget with a menu of big-ticket campaign promises, and which ones he would forgo if necessary to make it happen.

Among other things, the NDP has promised to create one million $15-a-day child-care spaces, which carries a $5 billion annual price tag once fully implemented after eight years.

In Toronto, Trudeau said a Liberal government would allow Canadians to repeatedly dip into their registered retirement savings to pay for a home. Current rules only permit a single withdrawal for first-time home buyers.

Trudeau said allowing access to RRSPs to buy a home "is something that will help Canadians in concrete ways."

But it was Trudeau's remarks in a CBC interview the night before — "a large percentage of small businesses are actually just ways for wealthier Canadians to save on their taxes," he said — that attracted the most lightning from his two main rivals.

"Small and medium-sized business is the backbone of this economy and that's why we're going to keep taxes down and strengthen small business in this country."

Green party Leader Elizabeth May released her party's platform Wednesday, which promises billions of dollars for the environment, health care and support for seniors — without running a deficit.

And she predicted an important third-party role for her Greens after the Oct. 19 vote.

"A minority Parliament can be a four-year period of respectful, deliberative, productive work for the people of Canada, or it can be a year or two of hyper-partisan squabbling and bickering," May said in Vancouver.

"The difference between those choices is how many Green members of Parliament are elected to work across party lines to give Canadians the government they want."

The tragic silhouette of little Alan Kurdi, meanwhile, was still shaping the debate on the Conservative campaign.

The government's response to the crisis has been front and centre in the last week, thanks to the now-iconic image of the three-year-old Kurdi lying dead on a Turkish beach.

That appeared to frustrate at least one Conservative supporter at an event in Welland, Ont., who heckled a reporter as she was asking Harper about the crisis.

As the question began, a low, collective groan was heard in the crowd before a lone voice was heard to say: "How many kids drowned in pools in Canada this past summer? Do you blame the government for that?"

Harper tried to intervene, telling the reporter to "go ahead."

The prime minister is under pressure to admit more refugees, and Harper said he will — but while taking care to avoid allowing terrorists from a war zone into Canada.

"We are talking about a terrorist war zone a lot of people are coming from. We will make sure we are also protecting Canadians from the security risk."

"Louis St. Laurent didn't let security concerns stop him from welcoming — at the height of the Cold War — tens upon tens of thousands of Hungarian refugees."

Nor did the government of his father, Pierre, "let security concerns prevent him from welcoming in thousands upon thousands of Ismaili refugees fleeing Idi Amin in Uganda" in the 1970s, Trudeau added.

And he noted that the short-lived government of former Progressive Conservative Prime Minister Joe Clark — who briefly drove Pierre Trudeau's government from power — helped alleviate the Vietnamese refugee crisis at the end of the 1970s.
Read More:
Share on Facebook Share on Twitter