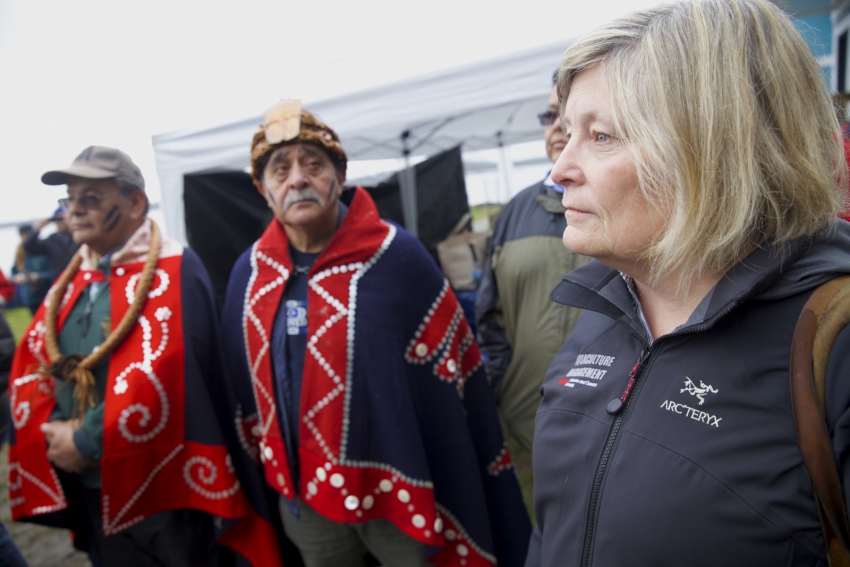 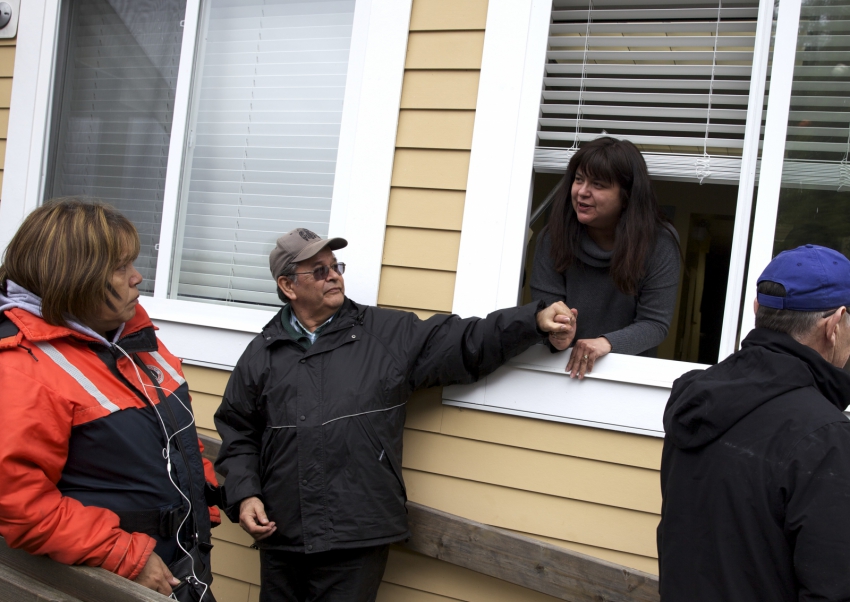 Sue Farlinger, DFO Pacific Regional Director (right), listens to Heiltsuk drummers outside the DFO office on Denny Island on Monday afternoon prior to resuming negotiations regarding the controversial herring fishery on the central B.C. coast. Photo by Mychaylo Prystupa.

After a dramatic day of not knowing if the Department of Fisheries and Oceans (DFO) Pacific Regional Director would come up to settle a herring fishery conflict, Sue Farlinger finally flew in Monday afternoon to Heiltsuk territory to resume negotiations, as protests at DFO offices in Vancouver and Bella Bella grew.

She was met with an honour welcome with drums and singing, despite strong feelings that the federal government is pushing to re-open the commercial fishery against Heiltsuk opposition.

"I think her presence here is long over due. DFO has had many opportunities in the past weeks, months and frankly years to intervene on this issue," said Jessie Housty, Heiltsuk elected councillor late Monday.

"The skeptics are saying this is too little, too late, but I think our leadership are really hoping that this conversation that's happening right now, is basically a step toward resolution," she added. 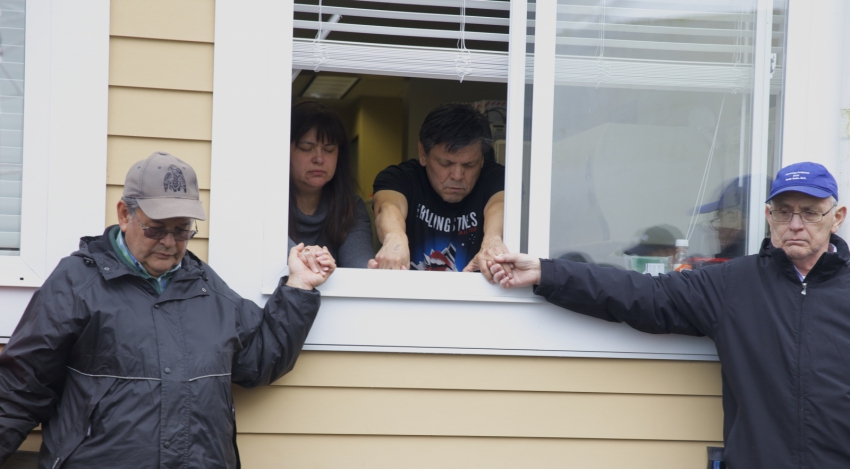 “DFO still refuses to guarantee that all of Area 7 will be closed to a gillnet fishery,” stated Brown. “They offered to set aside a few areas for Heiltsuk food, social, and ceremonial and spawn-on-kelp fisheries, but we remain strong in our resolve to protect all of Area 7.”

“We are hopeful that we can see a peaceful resolution to this situation,” said Chief Councillor Marilyn Slett. “DFO agreed to two of our three conditions, including a path forward for joint management. But we are holding firm on defending our territory from a gillnet opening this year.”

Earlier on Monday, locals sang and drummed to Slett and offered prayers and food through the window.

RCMP remain on scene, but the situation remains peaceful and respectful on all sides.  Some constables even bought lunch for community members.

In Vancouver, the downtown DFO office faced protests with reports of at least three people locking themselves inside the federal building.

Before sitting down at the negotiating table, Farlinger told a hereditary leader and the gathered crowd:

"I look forward to our discussions.  We've talked a lot in the last  few years, and we've made some progress, and there are still some areas of disagreement between us," said the high-ranking DFO manager.

Earlier, a sleepless chief councillor Slett told the Vancouver Observer through the DFO office window that this is a principled fight to protect the herring stocks from over fishing.

“We don’t believe the numbers that are out there that DFO are forecasting, will allow for a sustainable fishery," said Slett with a hushed voice.

“It’s really around the management that happens back east with the [Conservative] Minister, and how those decisions are made."

“It’s been quite surreal. Our people mobilized very quickly to occupy the building.”

“We have people working around the science, local fishermen too with that trade."

“We think those numbers are way off. If we allow another one — because already had one last week — that will devastate our herring stocks.”

DFO has promised to reopen the commercial fishing in the area any hour now, and its web posting recently advised boats to go to the central coast despite the protests.

Heiltsuk Tribal Council issued statement last week doubting the federal government’s herring fishery counts. They state that the bio-mass samples used to justify the re-opening were taken over a broad coastal area and have limited local relevance to area seven.

That’s where Indigenous fishermen lower their traditional roe-on-kelp lines, to harvest millions of tiny herring eggs, but not kill the adult herring fish, which are then free to reproduce for up to six years

By contrast, commercial fishing vessels have already scooped up several hundred tonnes of herring when the seine boat catch was reopened for less than 12 hours a week ago amid strong Aboriginal opposition.

Pacific Wild founder and wildlife photographer Ian McAllister speculated as to why the federal government might be aggressively pushing the re-opening of the herring trade.

"It may have something to do with pipeline politics.  This government is testing the mettle of coastal communities. It’s hard to imagine the long history of peaceful demonstration that the Heiltsuk have conducted, why they think they are just going to turn this into something, bigger," he said last week.