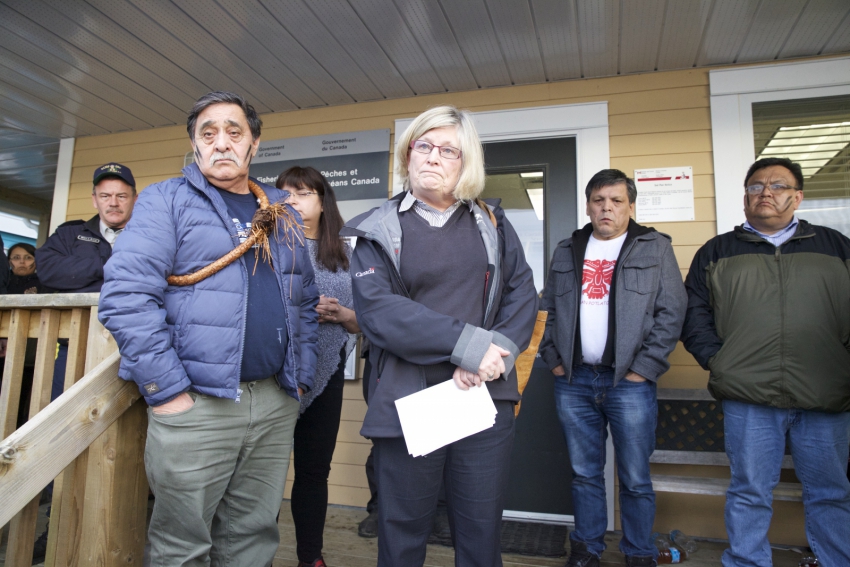 "It is confirmed. All commercial gill-netters are exiting Heiltsuk waters," Heiltsuk First Nation councillor Jess Housty wrote on Facebook this afternoon. "They will be escorted by Heiltsuk patrol boats and we will continue to occupy DFO until they have exited our waters."

"This victory belongs to the whole community. Grateful for our relatives from other Nations, our allies everywhere...And work is already beginning to ensure this issue is never pushed to such extremes again."

"The commercial herring roe fishery all of the Central Coast Management Area (Areas 6, 7, 8) has concluded," DFO spokesperson Dan Bate wrote in an email to The Vancouver Observer.

The federal Department of Fisheries and Oceans had been in an intense negotiation with the Heiltsuk First Nation this week, as a Heiltsuk chief councillor and several others locked themselves in the DFO office on Denny Island to protest the controversial re-opening of a herring fishery, despite fierce First Nation opposition.

After initially declining an invitation to meet the Heiltsuk, DFO’s senior B.C. manager Sue Farlinger emerged after three hours of talks with leaders on Denny Island on Tuesday, saying she needed to check with Ottawa whether the fishery would close or remain open.

"It's a hard-won victory driven by the conviction of our whole Nation and all the allies who supported us," Housty told The Vancouver Observer after the decision.

"The bottom line for us is that the stocks recover and someday thrive again. Today is an important step toward that goal and I think we've shown industry and DFO very clearly that Heiltsuk will not back down from our vision for healthy herring into the future."

The re-opening of the herring fishery last year sparked controversy, as leaked emails revealed that government scientists had recommended that the fishery remain closed.

“For the three [herring fishing] areas showing signs of recovery, it is recommended that they remain closed in 2014,” DFO scientists warned.

The e-mail became public during a recent and unsuccessful legal attempt by five coastal B.C. First Nations in federal court to close the fishery.

The DFO said its science was updated in 2015, and claim a limited catch is sustainable. Bate issued the following statement:

"Science forecasts showed that the Pacific Herring stock abundance would support commercial harvest opportunities in the Central Coast of BC while meeting conservation objectives. Additional precaution was exercised in the Central Coast by setting catch levels at half the usual harvest rate of 20 per cent. The Department committed to providing harvest opportunities where they were possible."

"The Department committed to providing harvest opportunities where they were possible. A purse seine fishery did occur on March 22nd  yielding 690 tons of an available 800 tons. This fishery is now closed. The season for the commercial herring roe fishery in the Central Coast Management Area has concluded."

"DFO will continue to work closely with the Heiltsuk First Nation, other First Nations and industry representatives on herring management."

DFO director a no show at Heiltsuk herring dispute