Pandas arrive in Canada, bringing challenges with them: The SinoFile 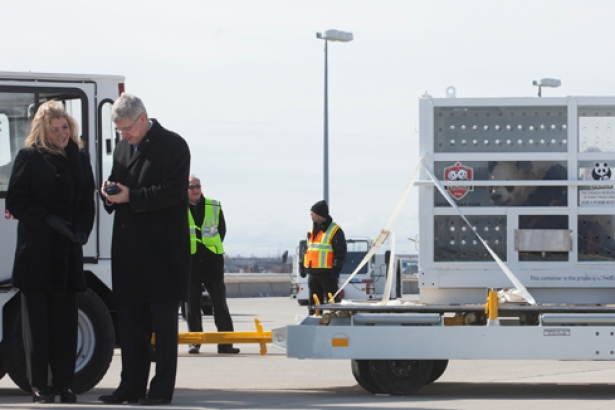 Prime Minister Stephen Harper received a shipment of a scarce Chinese natural resources yesterday in what some will inevitably call an ironic role reversal: no, it's not the Chinese equivalent of Alberta tar sands or a stake China's coveted rare earths.

For the first time in 20 years, Canadian zoos will house giant pandas -- a female named Er Shun and a male, Da Ma -- on lease for the next decade to the tune of $1 million a year in public funding.

“Their presence in Canada today and for the next ten years will remind us of the strong relationship between our countries and will delight the many Canadians who will visit the zoos to see them," the premier said in a release.

An endangered species, there are a modest 1,600 pandas living in the wild, according to the latest figures from the World Wildlife Fund, a phenomenon  the animal advocacy group attributes to China's own growing population and the destruction of bamboo-rich panda habitats. But pandas are also known to have perilously low breeding rates.

International media was recently inundated with news of two giant pandas, still based in the People's Republic, Ke Lin (female) and Yongyong (male). The couple were demonstrably never "in the mood." When Yongyong did attempt to initiate coitus with Ke Lin, Ke Lin fought him off.

But when Chinese researchers showed two giant pandas videos of other pandas mating, the two successfully imitated their pornographic counterparts.

Beijing says you CAN get married in the Year of the Snake: The SinoFile