COPE has been "rebuilt" despite election loss, Wong says 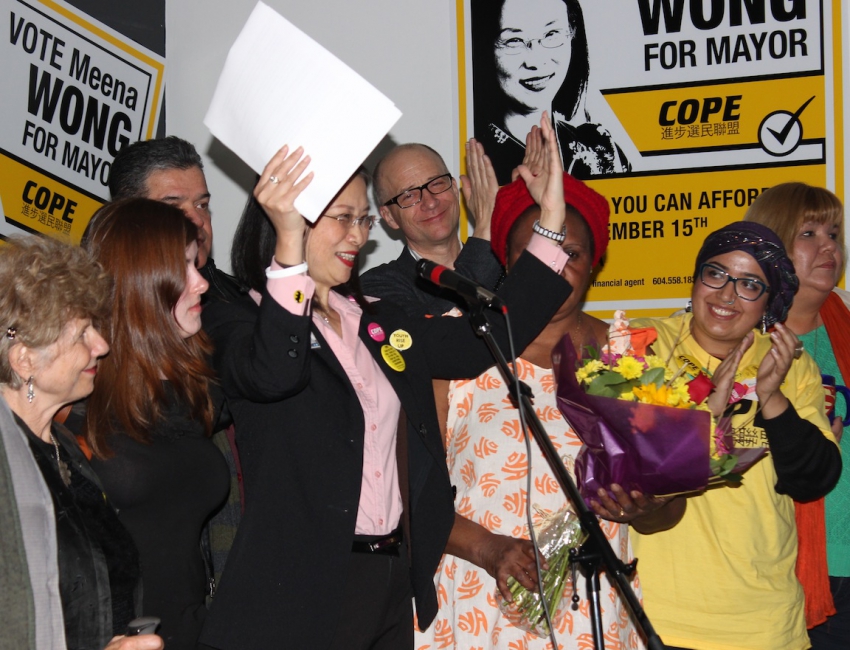 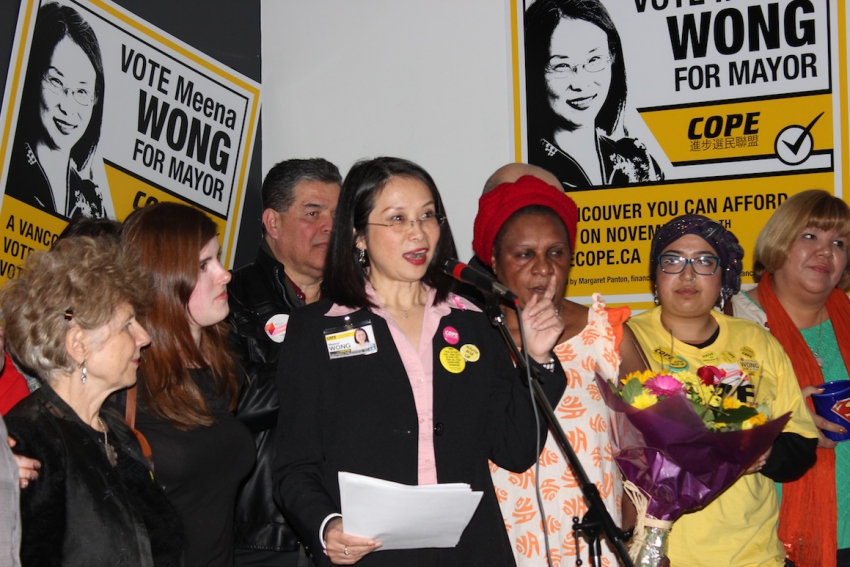 COPE’s Meena Wong may have trailed badly behind first place Gregor Robertson and Kirk LaPointe, but Wong still sees the 2014 election as a win. Wong says she doesn’t believe in miracles but she believes in good policies.

“The results tonight are disappointing,” said Wong prior to the final results, “but let’s look at the whole campaign. COPE has exceeded all expectations.”

“I was told by some people that this election was boring until COPE came along and talked about real issues that affect them,” said Wong.

Wong was best known for her revitalization of the affordability crisis in the city. Some of Wong’s biggest proposals for her platform consisted of plans to ban renovictions, tax vacant properties, build 800 units of city-owed housing a year. She also planned to enforce a $30 monthly unlimited bus pass for all Vancouver adults and intended to make minimum wage a livable rate at $15, she said. More recently, COPE endorsed its support for the Kinder Morgan protesters who recently had an injunction ruled against them.

A very diverse crowd listened to a live band in a dimly lit room at the COPE campaign office while awaiting election results.

The event started with a small group of close-knit supporters, but garnered more guests as the evening progressed. When the results were in, the crowd chanted “Meena” as the COPE mayoral candidate gave her speech conceding defeat.

“I’m feeling very inspired,” said Vancouver resident Selina Crammond, following the results, “I’ve been a member of COPE for two years. I’m really really proud of what the party has accomplished. It’s people trying to make a change for other people.”

Wong mentioned that her party made history with three indigenous women running for different levels of government and the first Asian mayoral candidate for a major party (herself).

“We have rebuilt COPE. COPE has not run a mayoral candidate for 12 years,” said Wong. “Even though we didn’t get anyone elected this time, more people know about COPE, and the people of Vancouver know where we stand.”

Wong also mentioned that Vision had and spent 20 times the money COPE did. She concluded her speech, saying she was “humbled” and “honoured” by her supporters, and that she would continue to fight for affordability in Vancouver.

This election may have been Gregor versus Kirk, said COPE’s executive director Sarah Beuhler, but 2018 will be all about Meena Wong.