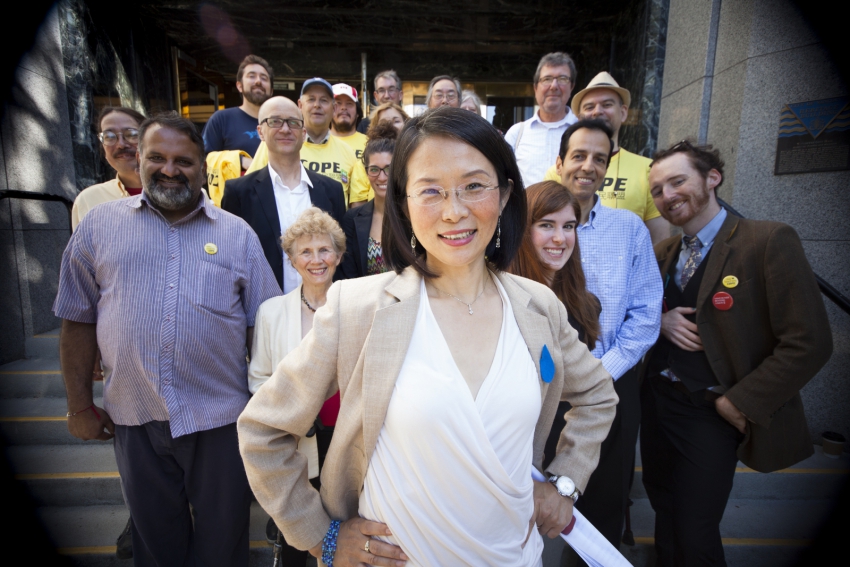 On the steps of City Hall, an enthused and energetic Meena Wong said Friday she hopes to win back the progressive vote lost to Gregor Robertson’s Vision Party, in her bid to become the next Mayor of Vancouver.

“We want to unite all the progressive people in Vancouver to build a better city,” said Wong.

"I want to work with you all to make Vancouver the most compassionate city," she told a crowd.

Central to her platform will be housing solutions.

Another pledge is to take on the housing crisis.

Wong added, too many people are not connected to the city's politics.

"I am into citizen engagement, education and outreach.  I think in Vancouver you’ve seen a lot of disengagement in the political process."

"I believe I can attract a lot of people who have not been engaged politically.”

The 53-year-old business woman slash long-time civic activist said Vision has drifted too far from its progressive principals, and cozied too close to real estate developers.

“Well that’s why I have chosen to run with COPE, because COPE doesn’t accept any money from property developers.  When we get elected in government, we want to actually control corporate donations," said Wong.

Wong added, her brand of political activism was forged in the country of her birth.

“I was born in China in Beijing, and lived through the Cultural Revolution as a child, and saw what a government with absolute power can do to its people."

“After coming to Canada...I’ve been here for over 30 years...I appreciate the grassroots activism.  That’s what makes Canada what it is now."

"Unfortunately, I think we’re headed in a very different direction."

She argued that under the the Coalition for Progressive Electors' former reigns, her party led many political victories in this city on rent control, and the creation of public spaces.

Founded in 1968, COPE was once a powerful force at City Hall, electing former Mayor Larry Campbell in 2002 and a majority of councillors.  Party's fortunes slowly plunged, to when it elected just one representative in 2011.

When asked how Wong expects to revive COPE and take on the arguably much better financed Vision and Non-Partisan Association parties, she said:

"I believe in the power of people."

“Get to know all the parties.  Ask questions.  Don’t just take their word for it.  Affordable housing, rapid transit – those are just words.  Get to know what the real policies are, and how are they going to implement that."

"The subway on Broadway, it’s going to be $3 billion.  Where’s the money going to come from?”

COPE's final slate of candidates for council will be decided at the party’s convention on Sunday.