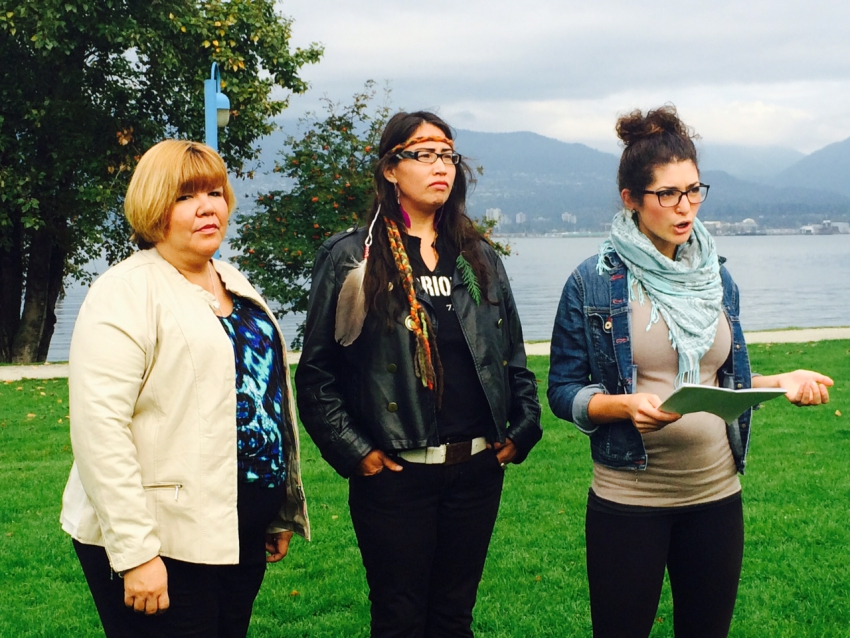 COPE hopes to make history this municipal election with three Indigenous women candidates on the ballot. Audrey Siegl, Cease Wyss and Diana Day could be the first Indigenous women in Vancouver's history, according to the party. Speaking at Crab Park on Friday, Siegl and Day voiced their plans for the city.

“My plan is to change the system so that it represents who I am, so it represents the other people who have been neglected or abused by the system," said Siegl, who is of the Musqueam Nation.

Siegl stressed that her top priorities include housing, Indigenous sovereignty and anti-violence against women. She said she understands the struggles of Vancouver's lower-income voters, and can relate to their problems with racial discrimination personally.

"I know what it's like to look at the list of candidates when I vote and not see a single person who represents me, and what I stand for. It’s my job to use my voice for those who are unable to use their own.”

Clean, safe affordable housing is a concept that is consistently ignored, she said. Siegl ensures that she would focus on the underlying issues and find long-term solutions to avoid more situations like the encampment at Oppenheimer Park.

As a current co-chair of VSB's district parent advisory council, Day said she will focus on multicultural support and anti-racism programs if elected.

“As an Indigenous woman I feel really strongly about being available for all cultures. I’m a strong supporter of immigrant populations as well, ” she said.

Day said she was disappointed when she tried to work with government to establish a 'mini-school' to teach Aboriginal students about their culture several years ago. Although a program was eventually created, it was only for young students from kindergarten to grade three, and left out the older students, Day said.

She said it was important because of the high drop out rate among older Aboriginal students, who she said were more likely to be bullied in school.

Vancouver School Board vice-chair Mike Lombardi of Vision said the government was working on improving programs for Aboriginal students, and that the team -- which includes the first-ever Aboriginal Trustee Klent Clement -- was making real progress.

“We’re continuing to work and consult with the aboriginal community on a regular basis,” said Lombardi. “The latest Ministry of Education report, which came out last year, praised Vancouver for increasing our graduation rate by 14 per cent for aboriginal kids over the last five years. We’re always looking for ideas to improve the aboriginal success rate.”

Day acknowledged that Vision councillor Andrea Reimer showed immense support for Aboriginal women. But she said more Indigenous voices need to be in the office for real change to happen.

Cease Wyss, who was not present to discuss her platform, is running for Vancouver Park Board. The food security activist, ethnobotanist and artist, hopes to fight for First Nations' right to fish, gather and hunt on their own traditional territories.

“We want fairness and equality and recognition,” said Siegl."We matter as much as anybody else does and this is a very personal issue."

Why I want to be Mayor: Vision's Gregor Robertson

Why I want to be Vancouver Mayor: NPA's Kirk LaPointe