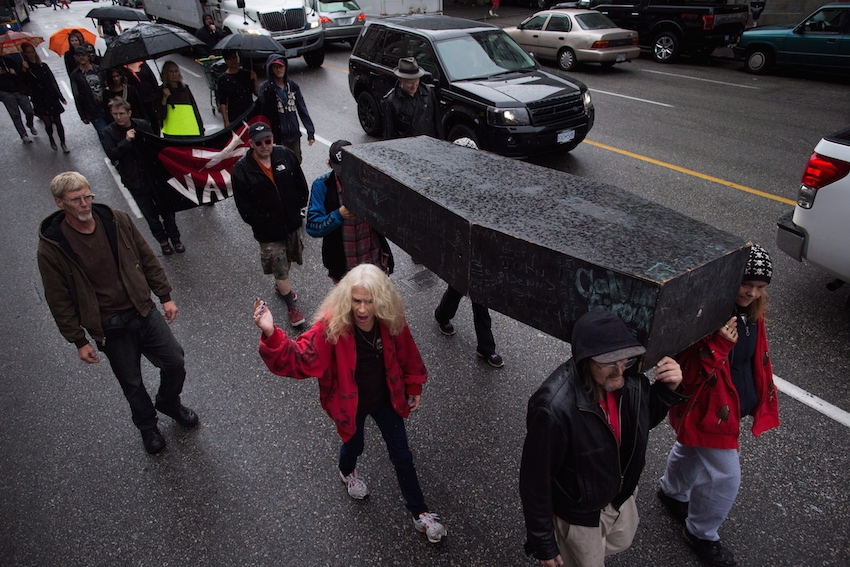 More people in British Columbia have died in the first nine months of this year from illicit drug overdoses compared with all of last year and despite the declaration of a public health emergency.

The Public Safety Ministry, citing the latest numbers from the B.C. Coroners Service, said Thursday there have been 555 illicit drug deaths from January to the end of September this year, compared with 508 deaths for 2015.

Fentanyl remains the major contributor to the high number of deaths, with the powerful opioid detected in more than 60 per cent of the deaths. The coroners service said fentanyl was detected in 30 per cent of illicit drug deaths last year.

Males accounted for 80 per cent of this year's drug deaths. The coroners service numbers also indicate males and females between the ages of 19 and 39 years account for the highest percentage of deaths.

The coroners service said the B.C. cities with the highest numbers of fentanyl-detected drug deaths so far this year were in Vancouver, Surrey, and Victoria.

The service is urging users to take harm-reduction measures, including never using alone and having naloxone ready to counteract an overdose if necessary.

Health Minister Terry Lake said in an interview on Thursday the numbers are grim, but there are signs deaths could be declining.

There were 76 reported illicit drug deaths in B.C. last January, the highest total since 2007. But last month there were 56 reported deaths, signs of a recent downward trend, Lake said.

Lake said declaring a public health emergency highlighted the dangers of illicit drug use, the presence of fentanyl and equipped first-responders and others with naloxone, which has saved lives.

"The numbers from September are a little bit higher than August but they are among the three lowest months out of the year so far in 2016," said Lake. "We're cautiously optimistic that we are seeing the results of a tremendous awareness campaign and a wide-spread naloxone program that puts that lifesaving drug in everybody's hands who may need it."

He said B.C. was on pace to record 800 illicit drug deaths in 2016 before the emergency was declared last April.

Lake said he will be in Ottawa next month attending a national opioid use summit co-hosted by the federal health ministry and the Ontario ministry of health.

Fentanyl a main cause in surge in B.C. drug deaths this year: coroner