Eric Pelkey spoke of the Tsawout understanding of the Douglas Treaty that it was a peace treaty which would protect their villages and way of life, including their fishing and hunting practices, and to be out on the water. “We know ourselves to be ‘The Salt Water People’,” he said. “Everything we do is reflected from the water. Our place names are named from the water. Our village sites are named like you come in a canoe and see it for the first time. Even our way of hunting deer is from the water…. That is who we are and why we protect the water.” 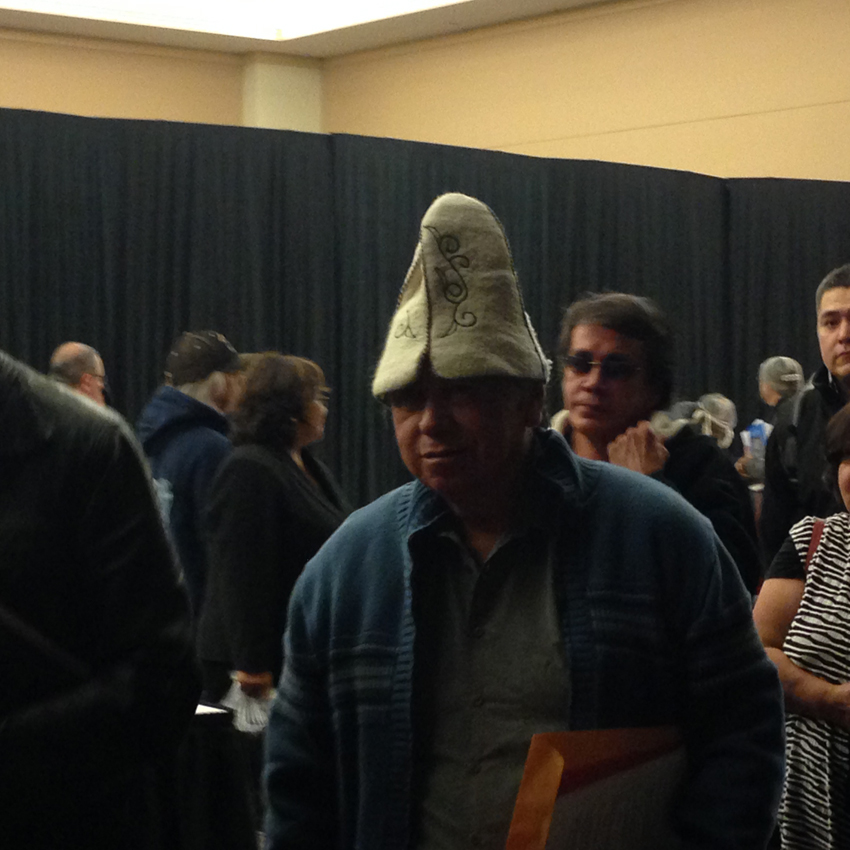 Earl Claxton Jr, who leads talks on medicinal plants for the Seachange Marine Conservation Society, began his testimony by noting that when the white people told his people to pick a new name from a hat, his grandfather refused and said he would keep his name. On his mother’s side, Earl Claxton is descended from Chief Capilano.

He told the story of the Tsawout village on what we know as Tod Inlet, near the Butchart Gardens. Following a Haida raid in which their village was burnt, a woman took her son to this new site to raise him to be a warrior and take vengeance on the Haida’s murder of her brother and husband. Others came with her. They knew it was a good site because Blue Grouse favor places with plenty of food and fresh water. There were so many Blue Grouse at this site that they filled all the branches of the trees down to the lower branches so people could go clonk one on the head for dinner.

He spoke of Blue Camas as a food source, the way the Tsawout camas fields looked like a lake from above. Earl Claxton’s grandfather told him of pit fires in which sacks and sacks of Blue Camas bulbs were cooked. This was possible because digging and reburying the bulbs made them grow to the size of a fist.

“It is my work to encourage a traditional diet so people will become healthy again,” Earl Claxon Jr said.

Regarding the tankers, he said a spill was not a question of “if,” but a matter of “when.” “We are the people who have always paid the price,” he said.  He described taking physical action to stop people from doing things that harm the ocean, such as when work went forward on a marina at their main traditional village site in Saanichton Bay. He described how the eel grass beds is an important rearing site for the creatures they take from the sea. “The elders always said that when the tide was out the table was set,” he said. “No matter how poor you were you could still eat like a king.” If there is a spill, he noted, the eel grass will be coated with oil and no longer a good home for the creatures that live there.

Earl Claxton Jr. stated his strong belief that the Douglas Treaty of 1852 and the Royal Proclamation of 1763 will protect their rights. “We feel there is still great strength in those laws,” he said.

The next oral historian, Aaron Sam, has been a provider for elders in ten villages for the last 40 years. He fasts until he has provided them with food. He also provides the sea food at feasts and ceremonies. He spends his time on the water every day and it was a chore for him to prepare for this hearing. He lives as he was taught by his father and grandfather. Now, he is teaching his twelve grandchildren the same practices. The youngest, a two year old boy, only needs to be shown things once. He’s a smart kid. Aaron Sam’s elders told him the ocean is his playground, and that is how he referred to it throughout his testimony. “Where your guys’ freight line is, I’m out there on both sides of the border,” he said. “You guys are taking all my treaty rights away from me.”

He described watching freight wakes demolish burial grounds close to the water on Saturna and Pender Islands, where his elders camped. He noted that it only took four years for the Queen of the North to founder and spill oil. “These waters don’t flush,” he said. “They wash back and forth.”