He invited the NEB panel to go back in time to when the Douglas treaty was proposed. The Tsawout understood that it didn’t only cover going fishing. It included their houses, the land, the fishing location, the fresh water supplies, and all the things that went along with a life on the islands, such as deer hunting, medicine gathering and hunting birds. “All would be protected we were told,” according to Nick. “We didn’t see a threat. Rather, we saw a promise…. Even just increased tanker traffic will affect our ability to get out there and to fish as formerly.”

The Trans Mountain lawyers, listened to this presentation with thoughtful smiles and small nods. 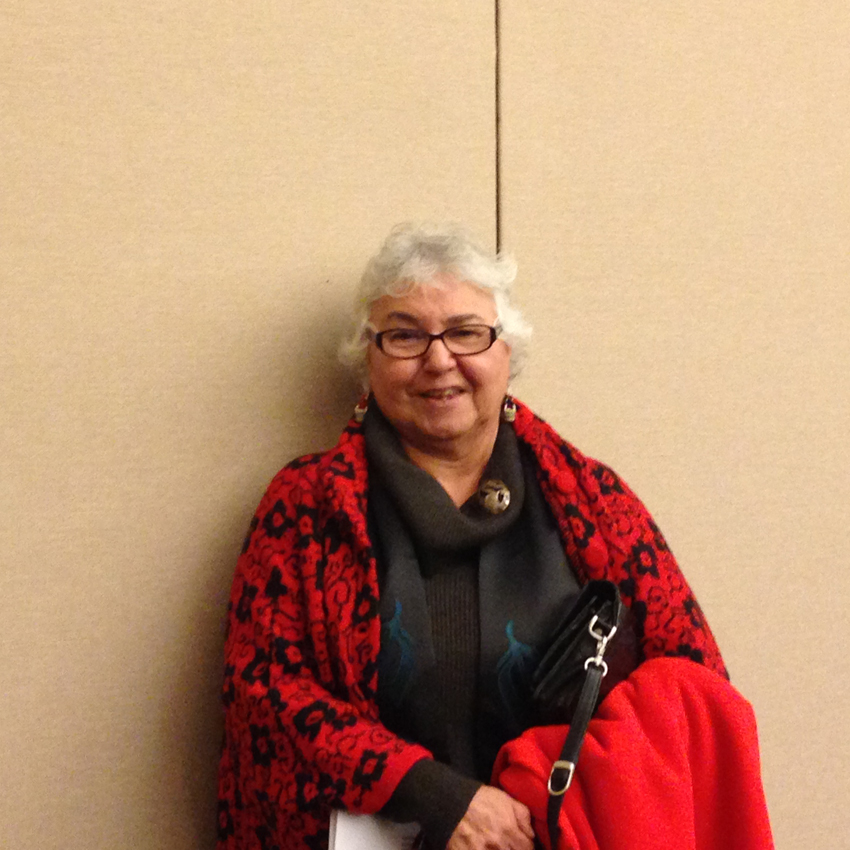 The final oral historian, Mavis Underwood, has worked for decades in family and community development. She was the first Aboriginal deputy director in this area in B.C., and has also served as the executive director of Child and Family Services for the North Island.

Mavis Underwood stated, “We would rather not be speaking to you from this position each one of us has been touched by loss and it has been very hard for us to look at the pictures, to see the places, to remember the places and the events and to not long for our elders.” She urged the panel to consider the cumulative effects of settlement and industrial development on the Tsawout lands and way of life, how pipelines currently exist, ancestors have been moved, land degraded and waters violated.

She noted that the Douglas Treaty rights include fresh water ecosystems because they are an important part of the salmon ecosystem. She stated that tanker traffic creates wave action that harms not only fish but the organisms that help them stay alive. For example, the eel grass beds are disrupted by the water’s velocity. She recalled the old way of crabbing in which people went to Saanichton Bay with pitch lamps by foot and small boat to attract the crabs to the light. As a child, she would put a stick in the water to catch a crab for lunch. There’d be a kettle on an open fire on the beach where they would cook and spend the days outside. She discussed the importance of the mud flat ecosystem.

She talked about the importance of this work, as her people struggle with addiction and suicides. “We are a self-governing people,” she said. “It is the laws of the government here that are breaking us.” She read from the United Nations Declaration on the Rights of Indigenous Peoples. “That international realm that tells you … indigenous people have the right to maintain control protect and develop their cultural heritage traditional law and traditional cultural practices,” she said. Her people are entitled to live undisturbed on their lands and to have intact ecosystems so they “fish as formerly.” “This is not part of our consultation here,” she said. “There is much more dialogue that has to come.”

When oral testimony concluded, David Hamilton acknowledged a point or two that each person testifying had made. He assured them that they would be heard and their oral histories would be considered, along with other evidence, in making a recommendation on the Trans Mountain pipeline.

One wanted to believe in the face value of his warmth and sincerity. But it couldn’t be done. Not given the Tsawout’s prior experiences, its constitutional objections to the process and the recent history similarly powerful oral history testimony by First Nations on the Northern Gateway Pipeline, followed by the NEB’s recommendation and the federal government’s approval. The NEB’s superficiality hung in contrast to the depth of the testimony that had gone before. True to their own traditions, the Tsawout leaders presented the NEB panel with gifts. Then they drummed and sang their way out of the room in what Mavis Underwood had described as a blessing intended for the protection of everyone in the room.