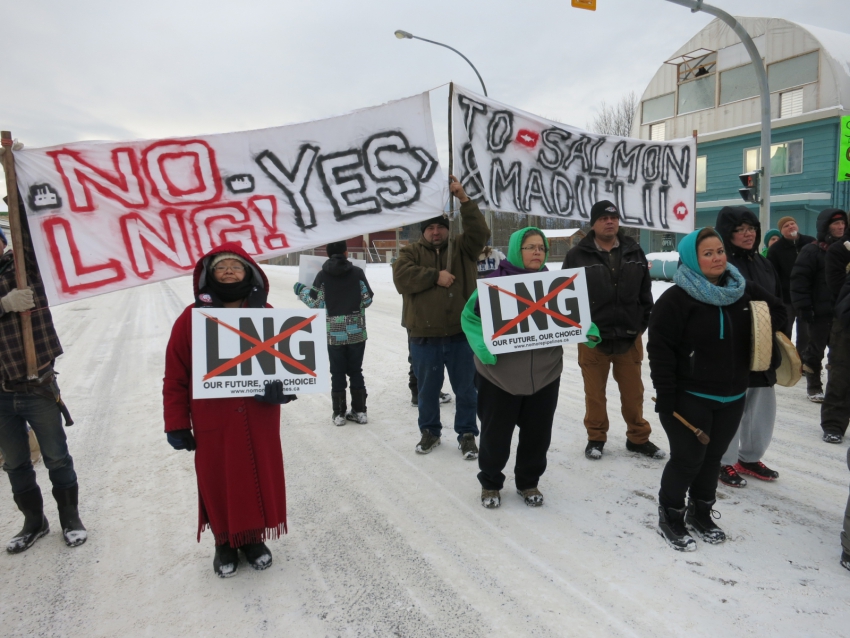 Gitxsan hereditary chiefs blocked Highway 16 at New Hazelton, in northern B.C. on Saturday, to protest recent LNG project approvals by the BC Environmental Assessment Office. The chiefs say the projects could collapse the salmon population in the Skeena River if built.

"The Gitxsan people have relied on salmon for thousands of years. The importance of salmon far outweighs any of the financial benefits that are and may be offered in the future for these LNG pipelines," Spookw hereditary chief Guuhadakwa (Norm Stephens) stated in a release.

"The risk (of LNG) to the salmon is far to great to allow any pipelines to cross our territories and none will. We will not lose the salmon on our watch."

Despite the icy weather, people held up signs on the frozen highway expressing outrage for the approval of new infrastructure without adequate consultation.

On Nov. 25, the B.C. government announced approvals to three LNG projects -- the Westcoast Connector Gas Transmission pipeline, Petronas' Pacific NorthWest LNG export facility in Port Edward and the Prince Rupert Gas Transmission pipeline. In addition to the Gitxsan First Nation, many local residents have told The Vancouver Observer they feel overwhelmed by the massive rush of LNG projects in their area. 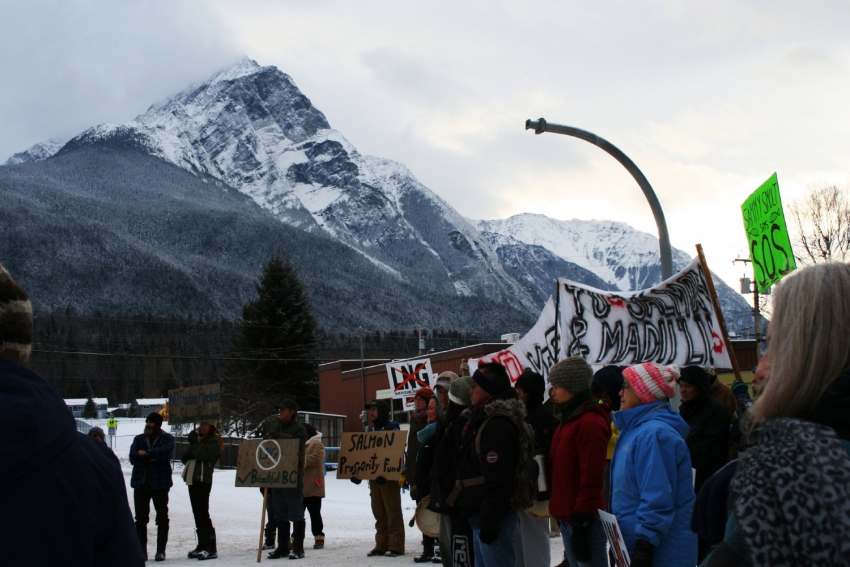 Greg Horne of the Skeena Watershed Conservation Coalition said he was alarmed by how quickly the approvals were granted, given their huge impact on the environment.

"The biggest issue with Petronas is obviously Lelu Island and the juvenile salmon habitat there," he said. "That seems like the last place to fast-track one of these assessments...In general there's a feeling of being railroaded, and down south in B.C. is where all the decisions are made and people here are bearing all the risks and not getting the benefits."

Although the B.C. government is pursuing rapid LNG development to develop a '$100 billion' prosperity fund, critics say those funds could come at the cost of other industries. A recent SFU study found that the sites for Pacific Northwest LNG and Prince Rupert LNG are in the most sensitive area for millions of Skeena salmon, with extremely abundant Sockeye, Chinook and Coho salmon. 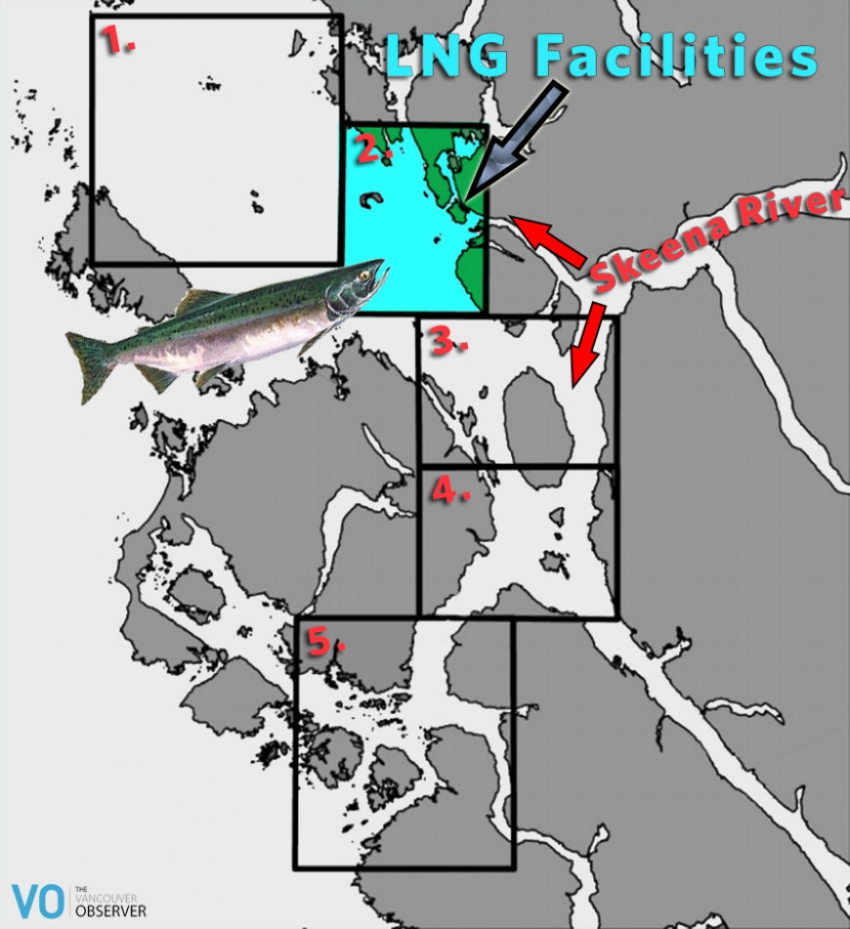 Graphic from SFU study, and modified by Mychaylo Prystupa - Vancouver Observer
"It really feels like a gold rush," he said.
Horne said even though some First Nation chiefs consented to the projects through the Gitxsan Treaty Society, others are heavily opposed to the project, and have constructed a camp, Madii Lii, to prevent the Prince Rupert project from being built.
Among locals' concerns, he said, were the the low tax rate, which B.C. reduced from seven to 3.5 per cent after Malaysian gas giant Petronas put pressure on the province. He added the infrastructure near Hazelton was already being strained, and the large influx of temporary workers -- some of them foreign -- could have social impacts on the community.
But despite the B.C. government's quick approval, Petronas announced last week it wanted to delay its decision on the Pacific Northwest LNG terminal due to slumping oil prices. Without a terminal in the area, the future of other gas projects planned for the Prince Rupert appears more uncertain.
Horne said he and others in the Skeena Watershed Conservation are working to help people adopt renewable energy, which will allow northern B.C. to keep its natural environment and salmon economy in tact.
Read More:
Share on Facebook Share on Twitter