Harper and Modi's visit to Vancouver fraught with tension and protests 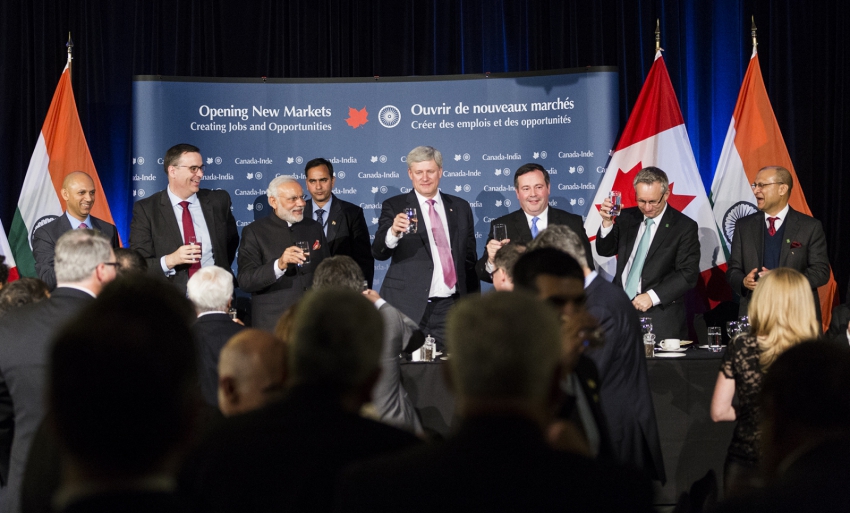 Prime Minister Stephen Harper met with Indian Prime Minister Narenda Modi at an event fraught with tension and security on Thursday evening. Police with dogs and backpacks full of pepper spray formed walls around the entrances of the Pinnacle Harbourfront Hotel to keep anti-Harper protesters at bay.

Behind a group of protesters holding banners a police dog barked and snarled from a black sport utility vehicle with the back passenger side window rolled down.

The protestors had arrived earlier in the evening and stayed until late in the evening. Meanwhile, notable business leaders and MPs from B.C. walked into the hotel to listen to the prime ministers speak about India and Canada's trade relations. 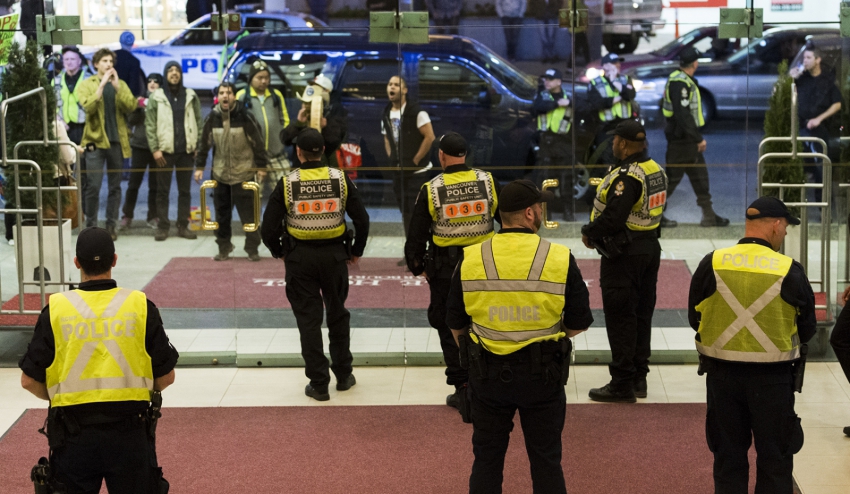 During his welcome speech, Harper said it was the first time in 42 years an Indian Prime Minister had visited Canada on a "stand-alone bi-lateral visit."

He went on to  talk about the federal government's commitment to a stable economy and the fight against terror both at home and abroad.

At the head table, Industry Minister James Moore and Defence Minister Jason Kenney clapped as Harper announced that Canada and India had signed a $350 million dollar deal to send 3,220 metric tonnes of Saskatchewan uranium to India. He also said the two nations had  come close to signing a "bilateral investment and protection agreement."

Addressing the audience, Harper said Vancouver is the place where most Indian immigrants arrived in Canada. He mentioned that Indian spiritual leader Swami Vivekananda's journey to bring yoga and Hinduism to the New World began in Vancouver more than 120 years ago.

While Harper spoke, Prime Minister Modi silently nodded in approval. When Modi took the podium, the gathered crowd — including Premier Christy Clark and former Reform Party and official Opposition Leader Stockwell Day — swiftly rose to their feet to greet him.

In a soft voice, Prime Minister Modi spoke in Hindi through a translator. He thanked Canadians for their hospitality and expressed the regards of 1.2 billion Indian people to the 1.2 million Indo-Canadians in Canada.

Modi then went on to congratulate Harper for the stability of Canada's economic order and continued stance against terrorism. Prime Minister Harper did not clap or smile at Modi's remarks, but nodded and leaned back in his chair, whispering something to Industry Minister James Moore.

After the Indian Prime Minister's speech, there was a toast to the continued partnership between the nations.