First Nations representatives from across B.C. were joined by dozens of concerned citizens for a rally highlighting the dangers of BC Hydro's new energy project. 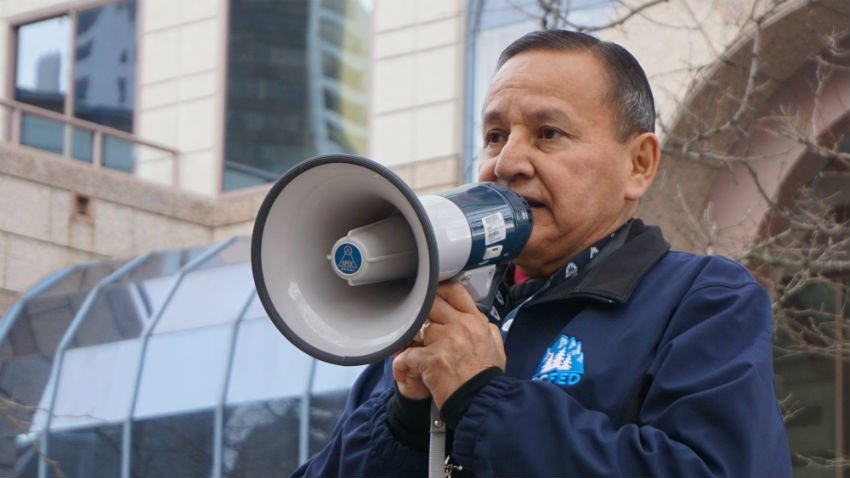 UBCIC President Grand Chief Stewart Phillip demonstrates against the construction of the Site C dam outside BC Hydro's office in downtown Vancouver on Wed. Nov. 18, 2015. Photo by Elizabeth McSheffrey.

Construction of the $9-billion hydroelectric project started in July. Upon completion, the dam will produce enough power to light up roughly 450,000 B.C. homes per year.

While the dam is strongly supported by the Clark government, its reservoir would also obliterate 107 kilometres of river valley bottoms along the Peace River and its tributaries. First Nations say this will result in the permanent loss of vital hunting, fishing and gathering sites.

"We suggest to the Clark government that they’re completely out of touch with the times, and now is the time we should turn our backs on these ill-conceived, destructive, large-scale hydro projects," said Grand Chief Stewart Phillip, president of the Union of BC Indian Chiefs.

"We have to make this a political issue, we need to double down on our efforts to raise the public profile — the Clark government has been getting a free ride with regard to the Site C dam issue.”

The protest comes just one day after the West Moberly and Prophet River First Nations appeared at the B.C. Supreme Court in Victoria over permits issued for the dam's construction that allow BC Hydro to remove beaver dams and bald eagles' nests, in addition to its other construction work.

Earlier this week, NDP B.C. NDP leader John Horgan also launched his PowerBC plan, and said if elected in the 2017 provincial election, he would consider cancelling the Site C dam.

"I can't speculate on what the outcomes of the court cases will be nor can I speculate on how far advanced any projects will be," Horgan said during the launch.

"What I wanted to do today was to demonstrate that there are alternatives, genuine alternatives and they are supported by science and good economics."

Protesters outside the BC Hydro office applauded the NDP's new plan, including environmental advocate Lynn Chapman:

"I think it’s great that the NDP is finally stepping up and presenting a new vision of energy for British Columbia," she told a crowd of cheering sign-holders. "We need that land to feed ourselves and keep our communities, country, and province strong." 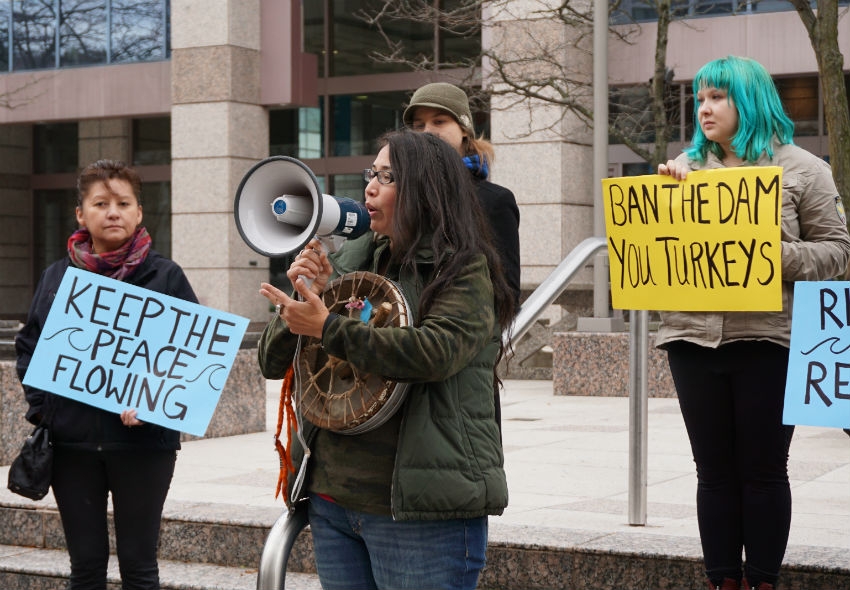 
When constructed, it will be the third of its kind on the Peace River system, compromising roughly 8,000 acres of prime farming land.

"This dam doesn’t just violate First Nations right and traditional ways of living on the land, it violates all life that exists on the land and in the waters near where the Site C is already underway," she explained.

“Whatever you can do, whether it’s share information, be there yourself or sponsor someone to be there… liking, sharing, posting, tweeting — all of these brand new [methods]. We don’t want this and we don’t accept it.” 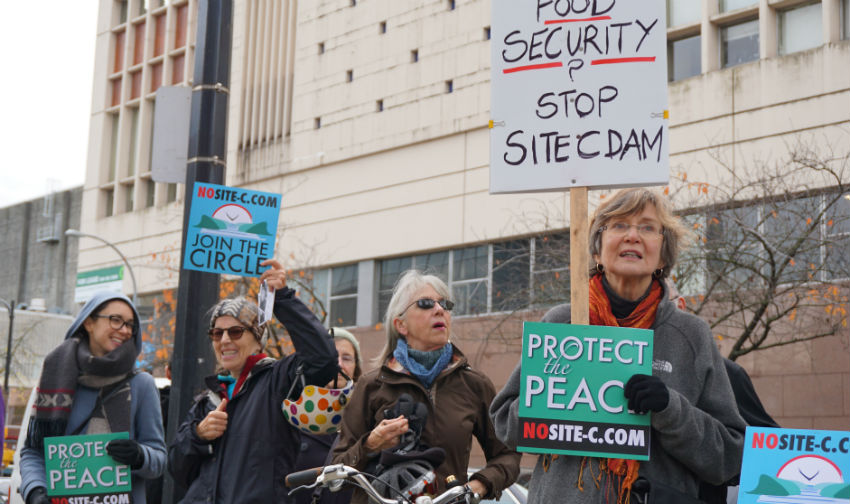 Protesters rally in support of a complete tear down of all operations related to the BC Hydro's Site C dam. Photo taken on Wed. Nov. 18, 2015 by Elizabeth McSheffrey.
Read More:
Share on Facebook Share on Twitter