Election pundits say the far-off election date of Oct. 19 — the longest in Canadian history — reflects a strategic move by Harper’s government to drain all opposition parties of their campaign resources. 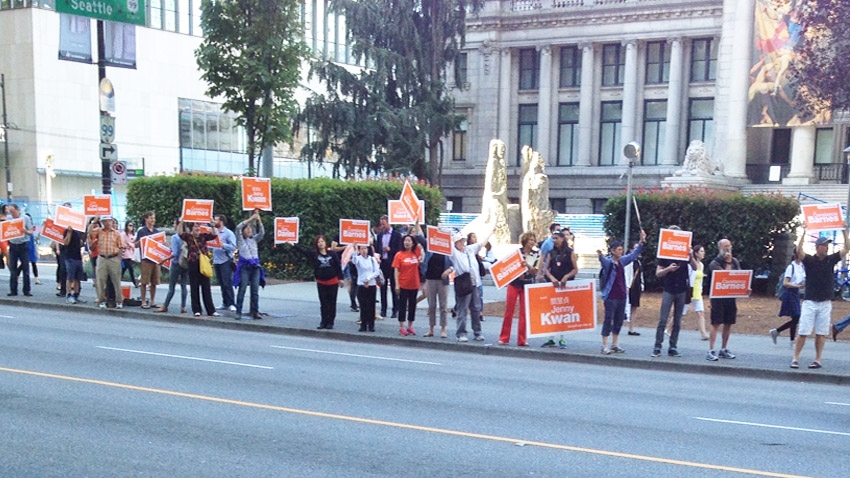 A team of local supporters of Mulcair's NDP lined both sides of Georgia Street to attract the attention of morning commuters Tuesday. Vancouver Observer photo

Lining both sides of Georgia Street between Hornby and Howe, the raucous crowd of volunteers of all ages waved orange signs and cheered at honking drivers on their morning commute.

NDP and Green candidates, in particular, will be relying on well-organized teams of volunteers across the nation to get their message out, in sharp contrast to the Conservatives, and to a lesser extent Justin Trudeau’s Liberals. Harper makes no apology for his party’s war chest, chocking that up to solid party support and good organization.

All opposition parties have been taking aim at the majority government party’s deep pockets, with the NDP slamming the more than $750 million of public money spent on “questionable government advertising” since they came to power. Election pundits say the far-off election date of Oct. 19 — the longest in Canadian history — reflects a strategic move by Harper’s government to drain all opposition parties of their campaign resources.

On Sunday, the federal NDP charged the Harper Conservatives with doling out more 108 separate government cheques across the country, totalling over $1.1 billion dollars “in a cynical cross-country patronage blitz” last Thursday. And by the weekend the Conservatives promised more than $800 million at over 130 funding announcements across the country, according to the press release.