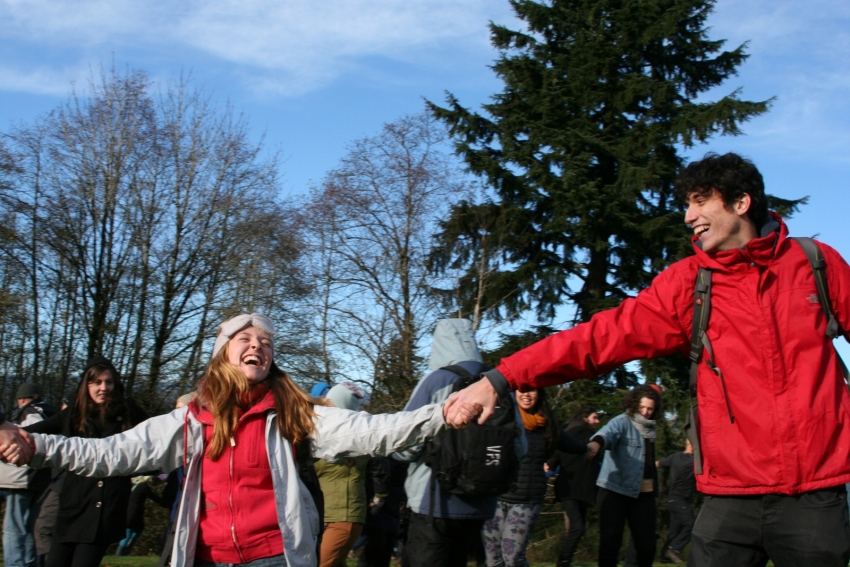 Protesters celebrating on Burnaby Mountain. All photos by Peter Morelli.

There were celebrations on Burnaby Mountain today when the RCMP informed protest organizers around 10:00am that Kinder Morgan had decided to leave the mountain and would do so immediately. By the time that Karen Mahon, a veteran of the Clayoquot Sound protests and one of Wednesday's arrestees, was able to stand up in front of the sizeable crowd assembled for the day's events at the beginning of Centennial Drive and declare that "this is the beginning of victory weekend on Burnaby Mountain," helicopters could already be spotted overhead flying out Trans Mountain pipeline equipment from the last remaining drill site on the hill. Yet as activists are aware, even if there was a clear sense of victory on the hill today, the war is far from won, and there is still uncertainty about the future of Burnaby's ongoing conflict with the Trans Mountain pipeline.

Valerie Langer, one of the leaders of the historic Clayoquot Sound blockade who was also arrested last Wednesday for crossing police lines, spoke to the Vancouver Observer about this sudden development in the ongoing protests against Kinder Morgan on Burnaby Mountain.

"It's victory day," she said, laughing with excitement. "It ended as a good day yesterday, and then we arrived here in the morning and the RCMP basically said Kinder Morgan gave up, they didn't get their extension, they can't finish the work they started to do and there's no point facing off. So they removed their drill machinery this morning. As we were speaking down at the rally at 10:30am they were pulling equipment out."

Trans Mountain sent out a tweet around 11.30am confirming that they had begun packing up and were set to leave the mountain:

Our crews are removing equipment & supplies by helicopter from the remaining work site on #BurnabyMountain pic.twitter.com/GWllYyiCzW

Langer was conscious that other victories will be needed to succeed in stopping pipeline expansion in British Columbia and Canada completely, noting that "this is just one battle, and there are still a lot of other battles to come. Not just on this pipeline, but Energy East and the Enbridge pipeline." She was positive about the overall picture, however, suggesting that "we are feeling a turning of the tide," where the public response to "the first shovel in the ground on the survey of this mountain was representative of what people will do at any point that companies decide they have the legal license and the people decide that they don't have the social license." 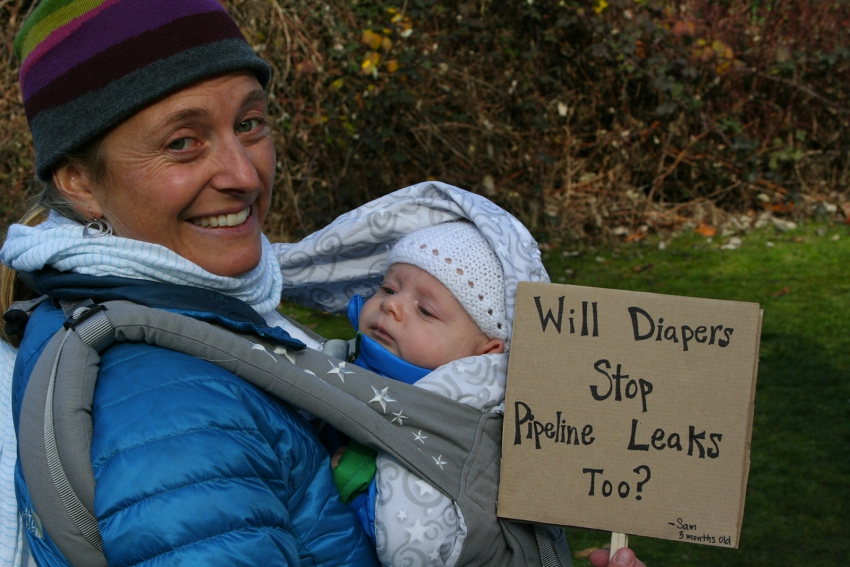 3-months-old Sam Salomon-Storr and his mother Anne Salomon, an Assistant Professor at the SFU School of Resource and Environmental Management.

Activists started to feel that the tide was shifting yesterday when Justice Austin Cullen rejected all of the Kinder Morgan civil contempt charges and refused to extend the date on the Kinder Morgan injunction. Today offered yet more hope to those attending protests on the hill that Kinder Morgan will not succeed in running a second pipeline through Burnaby Mountain.

As Valerie Langer alluded to, though, further protest will likely be needed to halt Trans Mountain pipeline progress on Burnaby Mountain once and for all. In a November 27th press release, where they acknowledged that they were "not able to complete the work at one of the two borehole locations" on Burnaby Mountain because of the BC Supreme Court's refusal to extend the injunction, Trans Mountain stated:

BREAKING: Many Burnaby Mountain arrests may have been illegitimate, says BCCLA