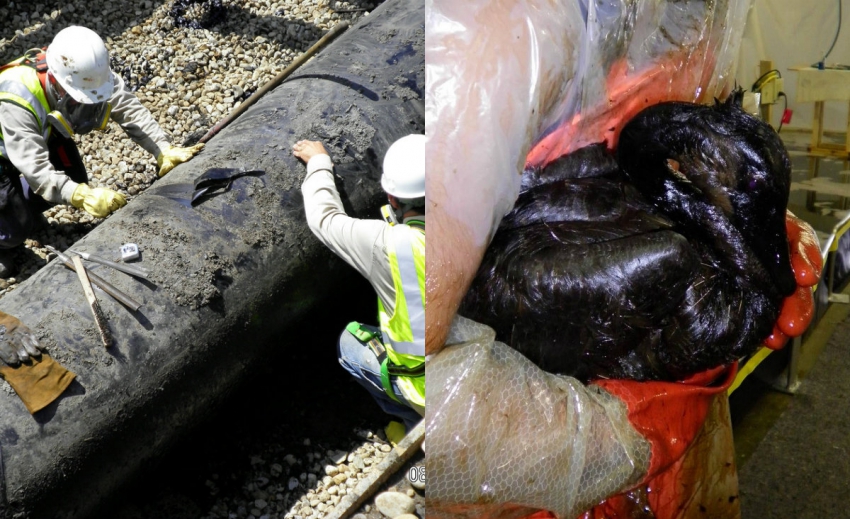 Photos from Kalamazoo River oil spill near Marshall, Michigan, in 2010. Photos via EPA Flickr site.
In a recent phone call for its Q3 earnings, Enbridge president Mark Maki said the company doesn't have plans to significantly increase its current liability insurance, despite the $1.2 billion cleanup cost of its oil spill near Marshall, Michigan in 2010. The rupture along its Line 6B pipeline, which poured around 843,000 gallons of bitumen from Alberta's oil sands into the Kalamazoo River over 17 hours, is the largest onland oil spill in U.S. history.
In a response to a question from Credit Suisse's John Edwards, Maki explains that the company had "modest" increases in liability coverage from $600 million to $700 million after the Kalamazoo spill, but said spills of that scale were extremely rare, and that there was little value in insuring for such unusual large-scale disasters.

Have you taken on more insurance coverage in light of this rising liability, if you will, from the Michigan incident a few years ago? I think you had about $600 million or so before. Have you taken that up to, say, over $1 billion in the wake of that incident, or maybe you can talk about process there?

Yeah, we've had very modest increases in the amount of liability coverage that we have, John. It's just not top off mind. I think it's $700 million of liability. It's very, very expensive beyond that particular point. If you go back over our history, the Marshall incident was without question really a confluence of a number of very, very difficult and bad events in terms of what it cost ultimately. So we just don't see a lot of value in insuring for another Marshall, especially if you consider what the company has done in terms of the response, the capabilities that company has, the additional investment we've made in terms of new pipelines, replaced Line 6B, going to replace Line 3, the integrity program we've announced on our Line 10.

We've done a tremendous amount and we've got more work to do, as Al often highlights, at the Enbridge Inc level. So I think this is an example we're adequately insured against the risk and it is insurance. It's not mention every conceivable potential incident. It covers off what we think to be the likely incidents and then some.

And just to confirm that number, that is $700 million in the aggregate insurance liability for environmental for Enbridge Inc.

So basically what you're saying is to cover more than that from a rate perspective, it's not cost effective to take that on?

For the company of the size of EEP and the ability to handle, I don't see any point to insuring at $1 billion or $1.2 billion or whatever you all look that.

Meanwhile, the Canadian federal government has imposed as an absolute liability for oil spills to build its Northern Gateway pipeline across northern British Columbia. Even though the Enbridge's president said it was "very, very expensive" to insure beyond $700 million, it is obligatory for the company to have $950 million liability coverage set aside before building Northern Gateway.
With regard to the Kinder Morgan Trans Mountain pipeline expansion, which would triple pipeline capacity to carry 890,00 barrels of diluted bitumen from Alberta's oil sands to a terminal in Burnaby, the company has "a $150 million General Liability insurance component, which covers all of the Kinder Morgan assets located in Canada as well as the Puget Sound Pipeline".  In addition, the company has access to $600 million of coverage for all of the entities in the Kinder Morgan (North America) group of companies.
Economist and former ICBC CEO Robyn Allan said it's "revealing" that a pipeline company like Enbridge said it was difficult to get insurance for $1 billion, and how important it was that Northern Gateway be insured for the cost of an oil spill, rather than  have that risk borne by British Columbians.
"At the very least we would expect the National Energy Board will require that Kinder Morgan have at least a mandatory $1 billion in 'stand alone' (that means all available for Trans Mountain) in liability coverage for spills just as they did for Northern Gateway," she said.  "But with factors such as the dense population of the lower mainland and the toxicity of condensate when it hits air, we would expect the level of required insurance to be considerably higher."
Enbridge was contacted for comment on Northern Gateway, but did not respond before publication.
Read More:
Share on Facebook Share on Twitter