Liberals under fire after Vancouver School Board gets bank loan 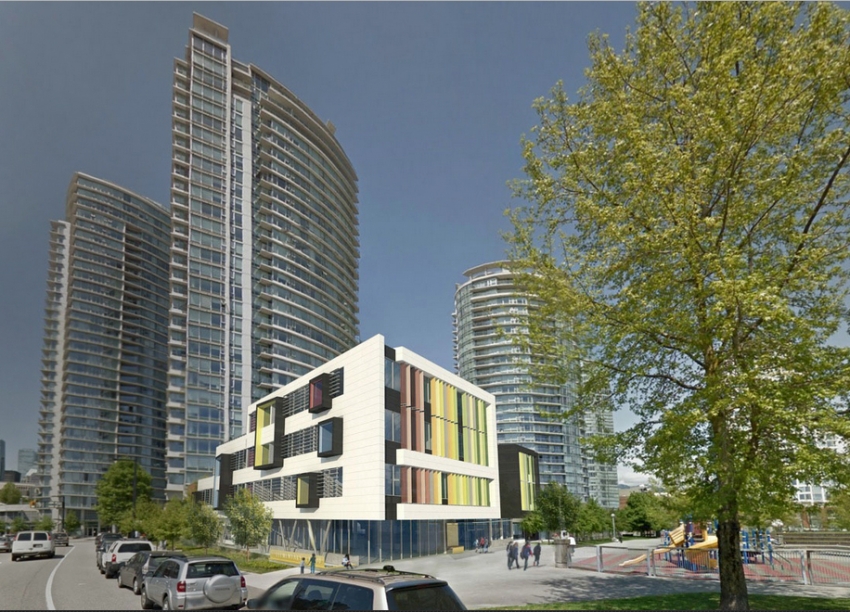 Rendering of International Village elementary at the corner of Abbott Street and Expo Boulevard. Image from franclarchitecture.com

The B.C. NDP is criticizing the provincial government’s priorities after the Vancouver School Board resorted to taking out a bank loan to begin construction on its new elementary school.

Rob Fleming, MLA for Victoria-Swan Lake and NDP education critic, said the school board’s decision to go into the red represents a “dangerous precedent” for the Ministry of Education, which refused to cough up $1.6 million to fill in the school board’s budget shortfall.

“I think it is opening up a dangerous precedent for the Province of British Columbia to download further responsibilities -- in this case capital funding for schools -- ultimately at the (school board’s) risk,” he told The Vancouver Observer. “The province is the level of government that has all the revenue tools around taxation to finance education. Boards don’t, but if they’re going to take on more and more debt, that’s concerning.”

The school board announced last week that construction would begin as soon as possible on a new, four-storey elementary school at International Village (at the corner of Abbott Street and Expo Boulevard) that will house approximately 510 students, and open in early 2017. It required a loan to cover nearly $2 million in unexpected construction costs and award a tender to ICT Construction Group before the deadline of May 29.

The tough financial decision comes in the wake of proposed legislation that would exempt B.C. private schools from paying taxes on playgrounds, fields, parking lots and other land, an exemption already granted to the province’s public schools. The new bill was proposed last Thursday, and if passed, would protect the schools from having their tax-exempt status removed by local councils to generate revenue for municipalities.

This could save B.C.’s private schools millions of dollars -- an indicator of where the province’s priorities lie within education, said Fleming.

“It’s a glaring double standard for the Minister of Education and the B.C. Liberals to say, ‘Sorry there’s no money for programs and services, or even to fully fund the cost of a teaching contract, you’ll have to cut so-called low-hanging fruit,’ and then turn around and hand over a gift fruit basket to private schools of more subsidies,” he said. “Why does this government have it in for the nine in 10 kids and their families who attend public schools in British Columbia?”

In an e-mailed statement to The Vancouver Observer the Ministry of Education defended its refusal to approve additional funding for the VSB school. This is the second time the board has “expanded the scope” of the International Village elementary school project and has asked for more funding, it states. “It is up to the board to reduce the project scope to deliver the project within the original budget, or fund the additional costs.”

In August last year, VSB requested an extra $3.56 million in funding for the school and was notified by the ministry that any additional costs due to “scope and escalation” must be covered by the district.

The province has already committed $13.5 million to the project, which was originally designed as a three-storey facility, but expanded to four storeys by the school board. The expansion increased costs by 40 per cent, according to the statement.

The school board maintains that it has a positive relationship with the provincial government, and that this is the first private loan it has taken in “recent memory,” said VSB chair Christopher Richardson. The circumstance is “unfortunate,” but the debt was necessary.

“I was disappointed, but frankly we have to (take out a loan),” he said. “There was no doubt in our mind that we need the school. It’s been delayed far too long.”

The BMO-secured loan was the most “flexible” funding option for VSB, he said. The school board hopes to repay it with any contingency money or provincial funding that becomes available within the two-year project time frame. If no money becomes available, it would take part in a 15-year repayment program that includes roughly $430,000 in interest, assuming stable interest rates.

The board will continue to lobby for funding from the Ministry of Education and look for opportunities to reduce the cost of the school.

Background on the bill