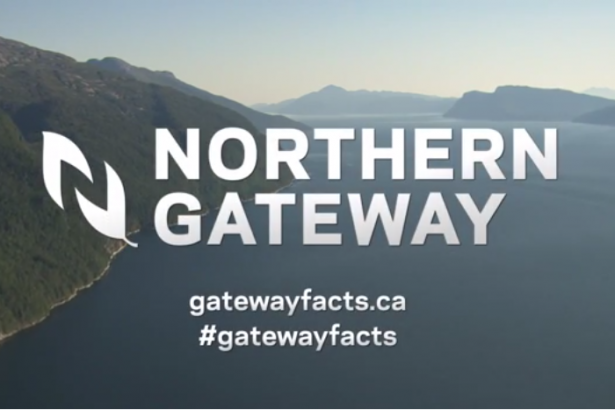 TV commercials, websites, ads, and years of consultations have not persuaded a majority of British Columbians to support the controversial Northern Gateway oil sands pipeline, a new Bloomberg-Nanos poll has found.

"It's a no-go at this time," pollster Nik Nanos, told the Vancouver Observer from Ottawa on Tuesday.

"Right now, only three out of every 10 British Columbians would support an approval of the pipeline today," he added.

The telephone survey last week of 500 B.C. residents showed 34 per cent prefer the project not be approved and another 33 per cent want the project delayed for further review.

Only 29 per cent said they want Northern Gateway approved.

The Harper government must rule on the project within two weeks.

The survey was paid for by Bloomberg News.  The polling company -- Nanos Research -- does no work for Enbridge, said the company president.  The report can be downloaded here.

"There are two competing tensions: concern over a potential oil spill, and to a lesser extent the recognition that Northern Gateway would create jobs," said Nanos.

A request for comment from Enbridge has been submitted.

A question of credibility

"Politicians in general didn't have as much credibility compared to environmental groups and Aboriginal leaders in British Columbia.  Enbridge was kind of this middle ground.

"The Stephen Harper government had the lowest comparable credibility.  So what does this mean?  When British Columbians want to have a dialogue about the pipeline, they want to hear from stakeholders in the province, as opposed to the federal government." 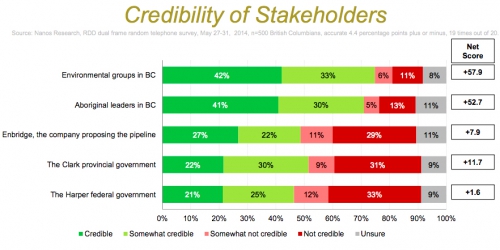 Former Conservative Minister of Natural Resources Joe Oliver infamously wrote in an open letter in 2012 that "environmental and other radical groups" were using regulatory hearings to frustrate and cause unnecessary delays.

"These groups threaten to hijack our regulatory system to achieve their radical ideological agenda," wrote Oliver.

Nanos said he believes there's a silver lining for Enbridge and the federal government.  He said it could mean they decision gets delayed to allow for more partnerships and consensus to be built.

"Where British Columbians are at with this - there hasn't been enough work done by the proponents of the pipeline to merit approval at this point in time," said Nanos.

Delay could be the name of the game