Minister says ride-hailing service Uber will operate in B.C. by end of 2017 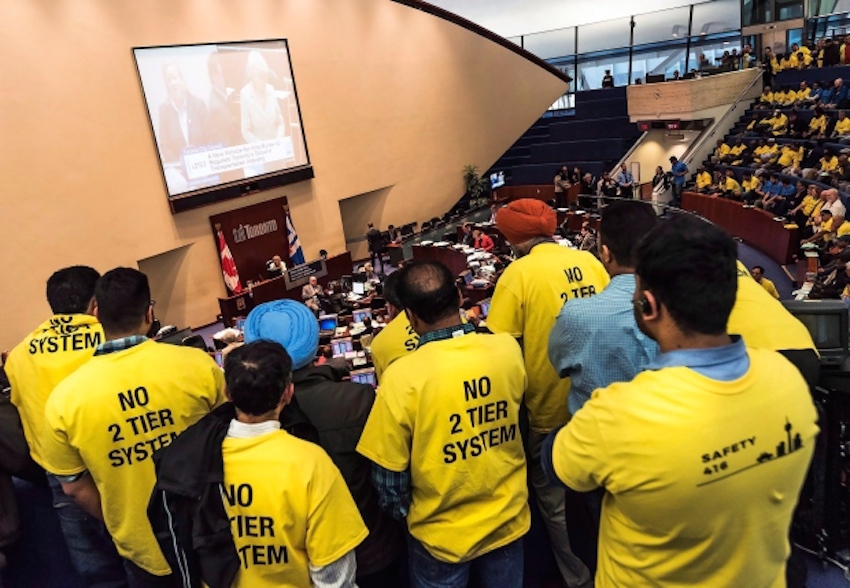 Taxi drivers protesting Uber gather in the Toronto City Hall chambers in anticipation of a vote to determine the fate of the Uber ride-hailing service on May 3, 2016. Photo by Aaron Vincent Elkaim/Canadian Press.

British Columbia's Liberal government will allow ride-hailing services such as Uber to operate in the province by the end of this year, while introducing initiatives that it says will help the taxi industry remain competitive.

Transportation Minister Todd Stone said the province consulted extensively with residents, the taxi industry and ride-hailing companies to create a "made-in-B.C." plan that his government will carry out if re-elected in May.

"British Columbians have made it very clear that there is a demand for services that ride-sharing companies provide," he said Tuesday.

"What we've heard is that any changes we introduce in British Columbia will need to address the public's desire for more choice, but also convenience, accessibility and competition."

The ministry said it will move to create a level playing field for cab companies, including investing $1 million to help the industry create an app that would allow the public to order and pay for a taxi the same way they would with a ride-hailing service.

It will also give taxis exclusive rights to street hailing and work with municipal governments to reduce red tape and address the current shortages of taxis and vehicles for hire.

B.C. will require the same safety standards for both taxis and ride-hailing providers and will also ensure safeguards are in place to provide consumers with fair pricing, the ministry said.

But it will loosen some regulations for drivers in the process, including a requirement for a specialized driver's licence. It will also work to remove municipal boundaries so that cabs and ride-hailing companies can operate anywhere.

The Vancouver Taxi Association swiftly promised to fight the province's plan any way it could, including in the courtroom.

Spokeswoman Carolyn Bauer said countless taxi drivers have gone into "enormous debt" by purchasing an operating licence and they will have no way to pay it back under the new framework.

"We are not opposed to changes to meet the public's interest, but ... the government has completely ignored our interests and we will use every available legal and political means available to us to fight this unfair government initiative."

Taxi licences in Vancouver were in such short supply that they were valued at up to $800,000 three years ago. But the cost has fallen with ongoing uncertainty about Uber's entry into the market, said Coun. Geoff Meggs.

Meggs said he was disappointed by the province's announcement, particularly its plans to scale back driver's licence requirements and remove municipal boundaries, which he said exist to ensure low-density areas are served by taxis.

"I thought they had an opportunity ... to get the benefits of ride-sharing while protecting all the standards and quality we see in the taxi industry," he said.

"Instead, what they've done, apparently, is create a level playing field by reducing the standards."

Opposition NDP Leader John Horgan said his party, if elected, would do a deeper consultation with the taxi industry to ensure local businesses are protected. He said the Liberals had released a poorly conceived plan two months before an election.

"They've basically turned the table upside down and we've got a whole bunch of people scrambling to try and figure out just what the consequences are of what they announced today," he said.

In a statement, Uber said the province's announcement was a "step forward" and called on all parties in B.C. to commit to bringing forward regulations that embrace ride-hailing this year.

Lyft, another popular ride-hailing service, said it didn't have any launch plans to share at the moment but it saw "enormous potential" for ride-sharing in B.C.

As part of the plan announced Tuesday, B.C.'s vehicle insurance corporation, ICBC, will invest up to $3.5 million in the taxi sector to install crash avoidance technology in all taxis in a bid to improve passenger safety. It will also make insurance more affordable for drivers.

The province said it will resume talks with the taxi and ride-hailing industries this summer before finalizing its plan in time for the 2017 holiday season.

Uber has been controversial in other provinces, including Quebec, where a class-action lawsuit filed by taxi companies and drivers against the company was certified in January.

The business community in B.C. applauded the decision.

"Businesses, residents and visitors across the Lower Mainland have made it clear they want more choice and more innovation in their transportation options," the Greater Vancouver Board of Trade's president Iain Black said in a statement.

Opinion: Would you, should you invest in Uber?