On March 22, Sound Space Architecture brought together some of the city’s finest musicians and composers to celebrate CIRS’s great acoustics and give the audience a unique experience of this vertical concert hall. 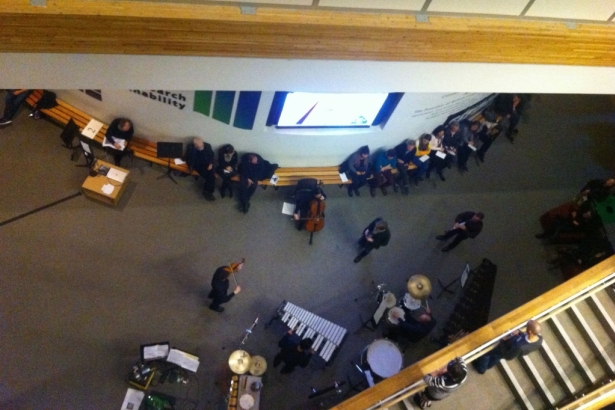 CIRS, a sanctuary to sustainability and an atrium to awesome acoustics.

It had been only a week since I visited Edward Burtynsky’s A Terrible Beauty at the Vancouver Art Gallery and now I was to witness its sonic equivalent, Sound Space Architecture, a concert hosted at the UBC Centre for Interactive Research on Sustainability (CIRS) by Vancouver New Music. While one showed us the unconscious footprint of our industrial world, the other showed the invisible acoustical imprint of a building designed consciously for sustainability. Both presented a large-format vision of the major issue confronting us today—the environment.

CIRS (pronounced “Sears” although all similarities end there) was designed as a research centre featuring cutting edge technology to show, at least architecturally, how we can learn to live lightly on the earth. The facility features a solar energy system, a waste/heat recovery system, a ground source heating system, an on-site waste-water treatment system, and even a curious onlooker touring system to show the public how it’s all done. Inviting Vancouver New Music to perform in its four-storey atrium is probably part of the latter system (unless of course CIRS has figured out how to convert curiosity into energy), and with its brilliant acoustics, it's also a marvellous play on sustainability. 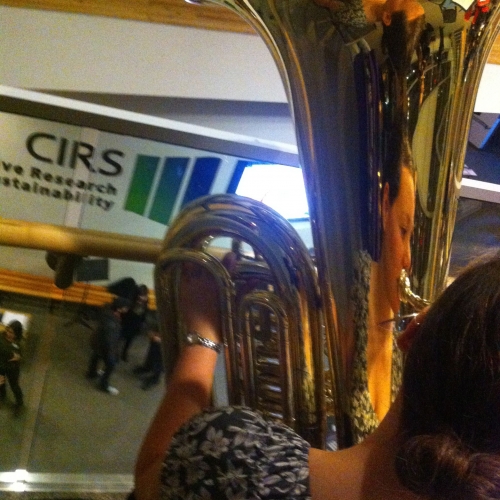 Vancouver New Music recently celebrated a form of sustainability­ as well—it’s own. It just marked 40 years bringing contemporary “classical” music to Vancouver in the form of concerts, festivals, and new music commissions. For the March 22 Sound Space Architecture concert at CIRS, its director, Georgio Magnanensi, brought together some of the city’s finest musicians and composers to celebrate CIRS’s great acoustics and give its small but loyal audience the unique experience of this vertical concert hall.

The evening opened with John Oswald’s ∆ƒ∆ (aka Delta Gradient), a fanfare for quartets of trumpets, trombones, and electronica. This was a good opener for our still fresh ears to acclimatize to CIRS acoustics. It was also an opportunity for the audience to capture the spirit of the instructions in the programme notes “to move around the lobby and explore the different levels of the CIRS atrium space during the performance”. Bit by bit, we began to move about exploring the different levels and even getting up close and friendly with the musicians stationed on each level. 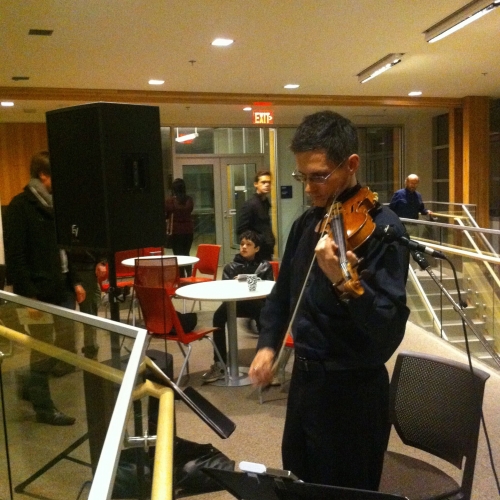 Given to earth in dark blood

Scott Smallwood’s Given to earth in dark blood was the most chamber music-like of the evening. Just drawing on clarinet, vibraphone, violin, cello, and drums, it let us hear why CIRS draws musicians in. With long sustained tones emanating from the bowels of the atrium, Smallwood’s music invaded the space subtly like water in a doomed ship. Its accompanying poem describing environmental degradation in the Kirkuk oilfields back in 1927 left little doubt of its environmental leanings.

“…he’s watched the gas flares
rise from holes in the earth, he’s seen the black river
wash through the villages in a flood of oil
as if the drillers had struck a vein deep in the skull of God…”
­–Brian Turner