Polling in the Toronto suburb of Vaughan continues to fuel suspicions that Veterans Affairs Minister Julian Fantino may soon be leaving federal politics -- and seeking a potential mayoral run. 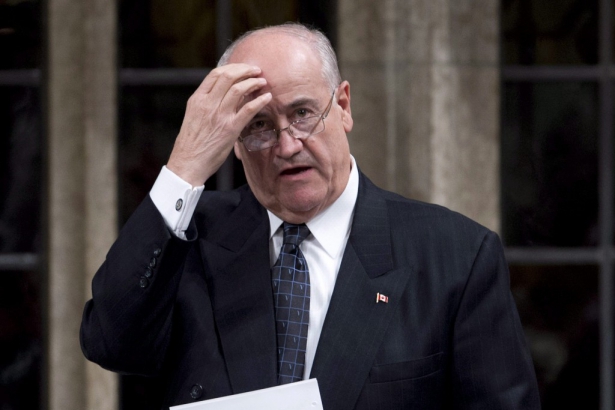 A new poll, along with advertising in the Toronto suburb of Vaughan, continues to feed rumours which suggest that beleaguered Veterans Affairs Minister Julian Fantino may step away from federal politics.

In a recording of the call provided to the Vancouver Observer, the polling asked: “In the municipal election to elect the mayor of Vaughan, which individual would you vote for?” and listed Julian Fantino along with four other candidates including Mayor Bevilacqua.

A final question asked if residents felt that it was 'time for a change' in their municipal government.

“We did conduct a telephone survey in Vaughan regarding municipal issues,” confirmed Adam Schneider, Research Manager for Winnipeg based-NRG Research Group. He said 600 interviews in the area were completed.

According to Schneider, Mr. Fantino was not actually the client - but sources informed the Vancouver Observer that the poll was paid for by a third party close to Fantino and his former campaign co-chair, Sam Ciccolini.

Then on Wednesday, Fantino's name started to appear in prominent ads run in local print and web media. Fantino’s face appears with the slogan “Putting Vaughan First – Bringing Investment to Vaughan,” along with the Conservative Party of Canada logo. 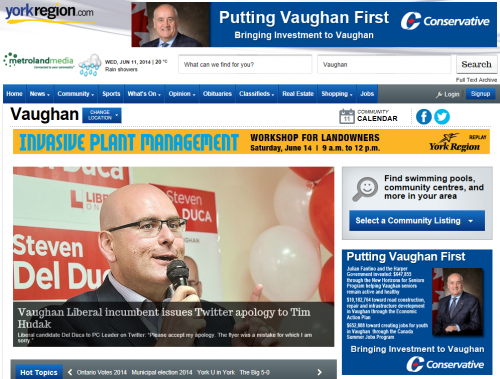 Pierce suggested that the ads were paid for by the local Conservative riding association. The ads appear to be well-timed with the polling and aimed at raising Fantino’s profile in the community ahead of the October 27 municipal election.

“Julian Fantino has every intention to remain on as the Member of Parliament for Vaughan and to continue in his role as the Minister of Veterans Affairs,” Director of Parliamentary Affairs David Pierce said, denying there were any plans for Fantino to leave office.

When pressed further on any steps taken by Fantino or his office to mitigate the polling that portrayed Fantino as a mayoral candidate without his knowledge, Pierce evaded the question and only responded with continued denials that Fantino was considering stepping down.

Fantino has been described as 'a 'sinking minister' due to charges that he disrespected military veterans  at a meeting over Veterans Affairs office closures. In January, war veterans loudly called for Fantino's resignation or "firing" after he showed up over one hour late to a meeting with veterans, then got into an argument and stormed out of the room.

Roy Lamore, a Thunder Bay resident whose military service dates back to the 1940s, told reporters he and other younger soldiers felt betrayed by closures of Veterans Affairs offices.

The Minister has been recently under fire for excessive spending on ministry advertising to the tune of $4 million -- which included twitter advertising and ads during the NHL playoffs. He spent $100,000 on promoted tweets alone, angering families of military veterans who said the money would have been far better spent on delivering services to soldiers. Fantino has not said he would be seeking to run in the federal election of 2015.

In addition to his current salary and benefits as a cabinet minister, Fantino is estimated to be earning over $118,000 in annual public service pensions from his 36 years in policing and having held the positions of Toronto Police Chief and Ontario Provincial Police Commissioner.