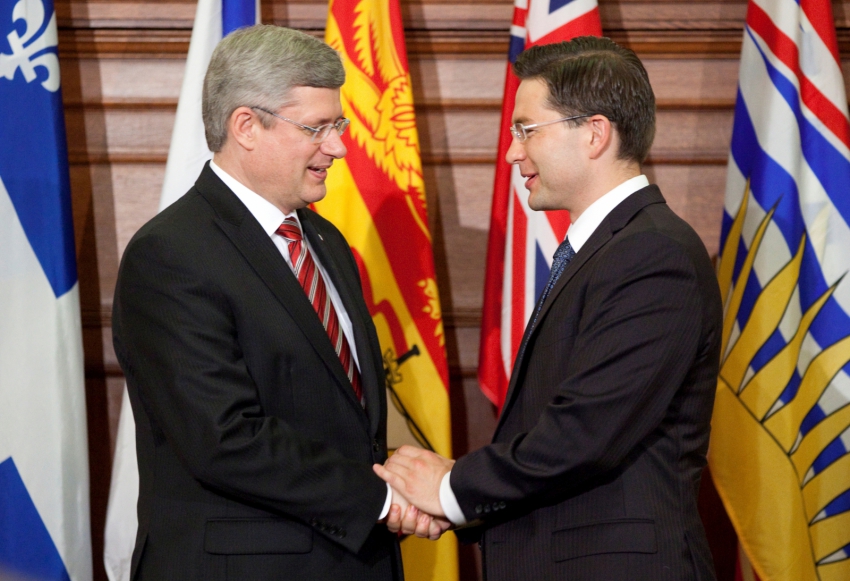 The Harper administration has just appointed Pierre Poilievre, the former Conservative minister for democratic reform, to minister of employment and social development.

Maclean's magazine once described the controversial and fiercely partisan 35-year-old MP as "the baby face of Canadian conservatism." For the past few years, he has pushed right-wing policies that echo those advocated by the American Koch brothers and the Tea Party movement they fund.

Minister Poilievre expressed his desire to implement anti-union "right to work" legislation in 2012, at the same time that U.S. states such as Wisconsin and Michigan passed legislation that undermined unions.

“I am the first federal politician to make a dedicated push toward this goal,’’ he said in an interview with The Toronto Star at the time.

He argued that he wanted federal workers to have "free choice" to not pay union fees, and said countries around the world were starting to move away from "forced unionism."

“I am going to work with cabinet and caucus colleagues to build support," he told the Star. "Over time I believe I can convince people of its merits. And hope springs eternal that one day we will have free choice for workers in Canada.’’

The purpose of so-called "right to work" laws, according to York University law professor David Doorey, is "to make it more difficult for unions to collect revenues, and thereby to weaken the labour movement." Their origins can be traced to right-wing advocacy groups such as Americans for Prosperity and the American Legislative Exchange Council (ALEC).

Both organizations receive significant funding from Exxon-Mobil and oil billionaires David and Charles Koch. In the documentary Citizen Koch, which examines the role of the Koch brothers in attacking unions in the traditionally progressive state of Wisconsin, an ALEC representative explains that without strong unions, the Democratic Party's fundraising capacity would be radically reduced.

The Center for Media and Democracy described ALEC as a "bill mill" because of its agenda aimed at uniting conservative politicians and corporate leaders to draft "model" legislative bills that are later introduced to U.S. state lawmakers. The Progressive magazine notes that a "'Right to Work Act'... has been in the ALEC library since at least 1980."

"Right to work" legislation is now law in 24 U.S. states.

In addition to right-to-work laws, the organizations pushed for strict voter ID requirements in 2011 that threatened to exclude lower-income individuals from voting, an issue Poilievre has also championed.

Poilievre's proposed reforms didn't go as far as Republican voter ID laws, but the Minister advocated removing vouching as a means for voters to prove their identity. Critics said the changes would discourage students and lower-income voters, who were more likely to vote for the NDP or Liberal parties.  Similarly, ALEC's voter ID laws have been slammed for discouraging poorer voters who don't have drivers licenses with photo IDs and tend not to vote Republican.

In a 2014 Globe and Mail op-ed titled "Are Conservatives lifting tactics from the GOP?" Lawrence Martin questioned why Poilievre and the Conservatives were using similar tactics to the Republican Party.

Poilievre's website is replete with policy points and quotes that reflect his belief in small government and free-market capitalism, themes dear to the Libertarian Koch brothers. "Government cannot give anything, without first taking it away," and "small government makes for big citizens" are among the quotes topping his site.

He expresses a wish to to "deliver more of our public services through free enterprise and competition."

Poilievre did not respond to questions about whether he'd continue to pursue right-to-work legislation in Canada, now that he is Minister of Employment.

In Canada, the Supreme Court recently sided with labour unions in a dispute over right-to-work legislation in Saskatchewan, ruling that the workers have a right to strike.