'Not guilty, Your Honour,' Mike Duffy says on Day 1 of Senate expenses trial 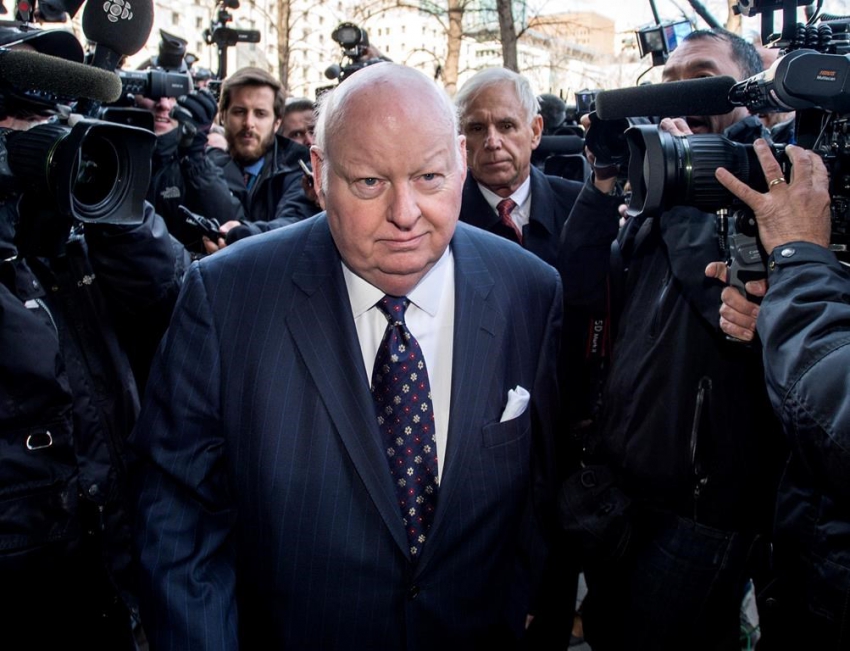 Attending a friend’s funeral. Taking a shopping trip to buy a puppy. Making sure he was on hand for the birth of his grandchild.

There was nothing wrong with Mike Duffy doing any of those things — except for one major problem, the crown argued Tuesday during the opening act of the year’s most eagerly awaited political legal drama.

"He bills it back to the Senate," deputy Crown attorney Mark Holmes said as he kicked off the case against Duffy, the television personality−turned−Conservative−senator whose disputed expense claims have rocked the government.

The suspended senator, who faces 31 counts of fraud, breach of trust and bribery, delivered his plea after the court clerk read the charges into the record.

"I am not guilty, Your Honour," Duffy, clad in a dark suit adorned with a white pocket square, told Ontario Justice Charles Vaillancourt in a clear, steady voice.

Over the course of the next 40 minutes, Holmes laid out why the prosecution believes Duffy is, in fact, guilty of defrauding the public purse by deliberately manipulating the financial policies of the Senate in order to charge taxpayers for personal business, or else simply hiding his activities from Senate scrutiny.

"Apart from the policies, there is something more fundamental at play and I think it can be reduced to two propositions," Holmes said.

"One, you can’t steal from your employer; and two, you can’t abuse your position of authority to unjustly enrich yourself."

The Crown intends to prove, Holmes said, that in a number of instances where Duffy filed expenses on the grounds he was conducting Senate business, he was actually on a trip for personal reasons.

Those travel expenses were just one of four different chapters of charges laid out by the Crown.

Holmes also laid out the Crown’s case with regard to $82,000 worth of living expenses Duffy filed for a secondary residence in the national capital region, the issue that first sparked the Senate scandal back in late 2012.

Duffy declared in Senate paperwork that his primary residence was in Prince Edward Island, the province for which he was appointed to serve by Prime Minister Stephen Harper.

The problem with that, Holmes said, is that Duffy didn’t really live in P.E.I. — at least not by any "common sense" interpretation of what "primary residence" means. Instead, Duffy continued to live in the same home in Kanata, Ont., outside Ottawa, that he and his wife had owned for five years prior to his appointment.

Duffy and his lawyer have argued in the past that there are no explicit rules that say what constitutes a primary or secondary residence, nor are there any guidelines as to how many days one has to spend in a primary home.

But there’s also a broader question, albeit one not being addressed by the court, Holmes added.

"From our perspective, Sen. Duffy is probably ineligible to sit in the Senate as a representative of Prince Edward Island," Holmes said.

"He was constitutionally eligible had he been appointed from the province of Ontario, but that isn’t what happened."

The prime minister has maintained throughout the Duffy saga that the senator was eligible to represent P.E.I.

Duffy arrived at the courthouse shortly before 10 a.m., holding his tongue as a throng of reporters and camera crews surrounded him and his lawyer Donald Bayne, who was expected to make his opening statements later Tuesday.

He was joined in the courtroom by his wife Heather, who sat behind him.

The trial, currently scheduled to last more than 40 days, will provide Duffy — who has protested his innocence ever since questions about his expense claims surfaced two years ago — a chance to clear his name.

But there is more at stake than Duffy’s reputation.

While police investigators have raised questions about the former broadcaster’s living and travel expense claims while he was a sitting senator, the credibility of the Conservative Party of Canada and some key players in the Prime Minister’s Office is also likely to be dragged into the spotlight.

At the centre of the bribery allegation is Nigel Wright, Prime Minister Stephen Harper’s former chief of staff.

Wright resigned after a media report revealed he provided a $90,000 cheque used to repay the living expenses that Duffy had claimed since being appointed by Harper.

The Mounties have said there was no evidence to support criminal charges against Wright, who has always maintained he was acting in the public interest and that his only goal was to "secure the repayment of taxpayer funds."

Aside from bribery, Duffy faces one count each of fraud on the government and breach of trust related to the $90,000 payment.

The RCMP have also alleged in court documents that Duffy paid a friend $65,000 for "little or no apparent work."

Holmes alleged that Duffy set up a master contract with Gerald Donohue that was later used to disperse funds to other contractors or acquaintances who did work for him, including a volunteer in his office and a personal trainer. The Crown alleges that Duffy did so to escape the scrutiny of the Senate’s finance office.