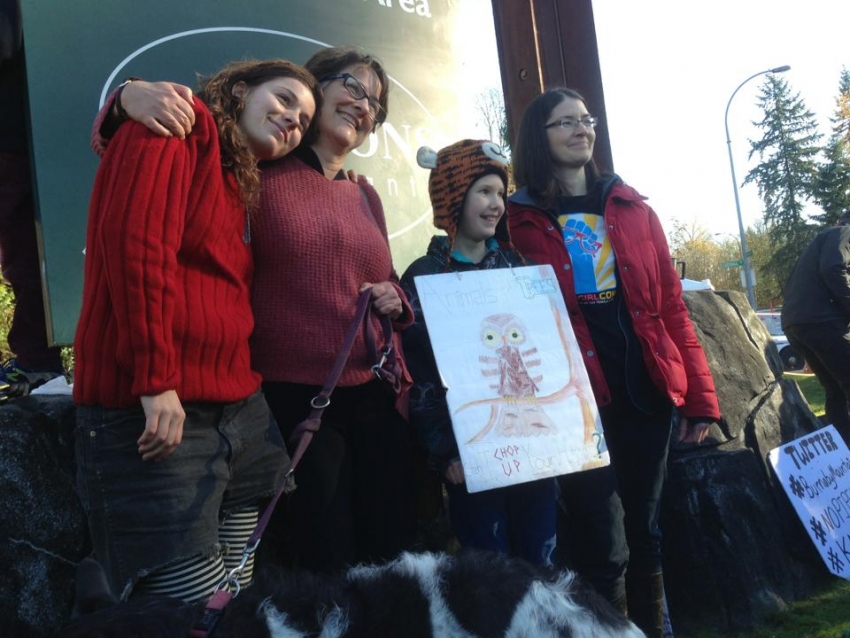 Lucy Lambert, far left, and Shaena Lambert, left, posing with 11-year-old and her mother, who were also arrested by the RCMP on Burnaby Mountain this weekend. Photo by Nicole Rycroft.

Vancouver-based writer Shaena Lambert -- author of Globe and Mail best book of the year pick Oh My Darling -- and her daughter Lucy embraced as they crossed the police line on Burnaby Mountain to protest Kinder Morgan's pipeline expansion.

"I was very nervous. Frightened and exhilarated," Shaena said. "We were holding hands, facing a row of probably a dozen police officers on the other side of the tape barrier. I looked at Lucy, and she flashed her big smile, which gave me courage. She was just amazing....Then we lifted the yellow tape and went under together." 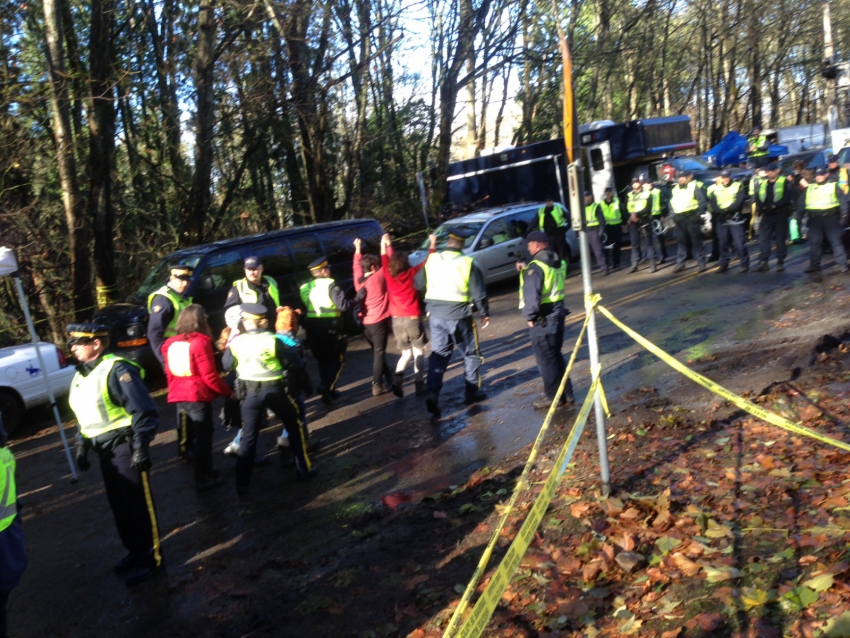 Her daughter Lucy, a 19 year old student, said she has been aware for years that the proposed Kinder Morgan project will triple the capacity of the existing Trans Mountain pipeline.
"It's always been something that I was against," Lucy said, during a lunch break from class. "In high school, I was signing petitions and trying to organize other students to rally as well."
She said she was motivated by a 'love of nature' and said she couldn't understand why the province was willing to increase the risk of an oil tanker or pipeline spill along the coast.
Shaena said her daughter and son inspired her to join the protests on Burnaby Mountain, where hundreds have gone to demonstrate against the survey work that Kinder Morgan is doing in preparation for the pipeline expansion, which is currently under review by the NEB.

"Lucy had been going to Burnaby Mountain for two days already, and my son Peter...also slept overnight on the mountain, in solidarity with the protestors camping there," Shaena explained.

"So I was being motivated by my children. I was thinking about...taking a stand as a person, because I’m devastated by climate change and the effects it is already having on our coast," she said.

Arrests 'not for fun' but to make a point

Lucy said police treated her "alright" but said being arrested isn't something that people on Burnaby Mountain are doing just for fun.

"It wasn't a pleasant experience," Lucy said. "We had to sit in a cell on our own for three or four hours, and that's after being in the paddy wagon. It's a strange feeling to think, 'wow, they can take our freedom from us for taking a stand.'"

She said proponents who argued in favour of the project because of the world's current dependence on oil were "short-sighted" and making decisions "based on the view that the economy will collapse in a few hundred years."
"You might be able to work on a pipeline or clean an oil spill, but we'll have no resources after our constant exploitation of the earth. That's not thinking about the future. It's creating jobs for the here and now, but it's not thinking about what your kids will do. What's really important here? Is it having money now, or sustaining things that have true? Do we want to destroy these things just to create jobs for this generation? It makes no sense."

Standing up for the next generation

Shaena said she understood her daughter's desire to do more than just protest, and said she felt the moment of crossing the police tape was like one of those moments in motherhood "when you realize that your children are grown up, and strong in their selves and their convictions, and now they are leading you."

"That was how it felt standing with her, and then crossing the tape," Shaena said.

Lucy, for her part, said she was "proud" her mother was there at Burnaby Mountain with her.

"It makes me so proud of my mom, and so happy to feel like part of a movement," she said.

"It's not just me and my mom. There are so many families out there.  It makes me feel we're in solidarity with something bigger. Mothers and children are uniting to make sure the future generation will have something there. Hopefully, when I'm a mother, me and my son or daughter will also be fighting for future generations."

Arrests rise to 53 on Burnaby Mountain, including author J.B. MacKinnon