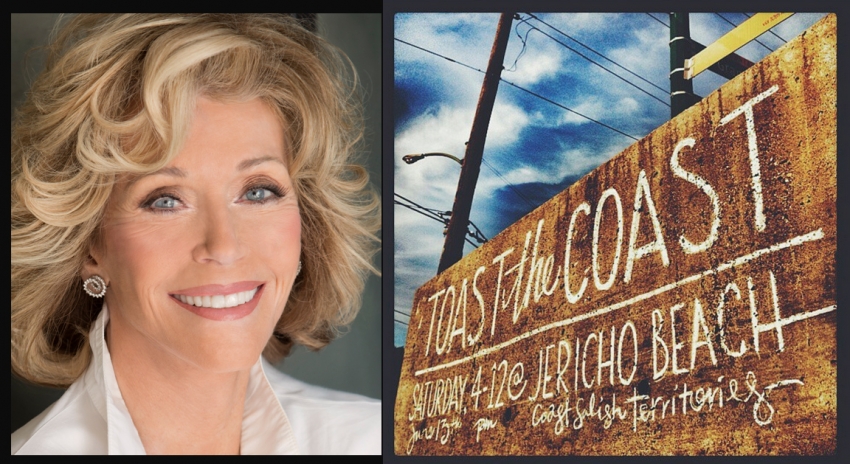 Twice an Academy Award winner, Jane Fonda's activism started during the Civil Rights Movement and accelerated during the Viet Nam War. Fonda is in Vancouver for Greepeace's 4 pm Toast the Coast picnic at Jericho Park on Saturday, and the Vancouver Observer sat down with her yesterday.  In the brief interview, Fonda talked about what inspired her to come to Canada to help fight oil pipelines and what motivates her environmental activism.

What brings you to Vancouver for Toast the Coast?

“One of the reasons that I’m here for this Toast the Coast rally tomorrow on Jericho Beach is because the environmental movement in Canada is so brave and so powerful, and so deserving of support, and I love this area so much that I just couldn’t resist being here.”

Environmental activists in Canada and the U.S. are sometimes framed as radicals to push forward government agendas. How do you manage those concerns with such a high profile?

“Well I think the radicals are the oil companies that are destroying the land, the air and the water, and causing unbelievable health problems to people who live, for example, near the tar sands. Cancers in animals, cancers in people — this is radical. Those of us who are trying to stop any more extraction of fossil fuels are common-sense people who care about a liveable future. We’re not the radicals.”

What do you consider to be your role in the go-green movement?

“There are seven million people around the world who have signed petitions to protect the Arctic from drilling. There are going to be several thousand people at Jericho Beach tomorrow — having celebrities there takes the voices of those people and amplifies it out so other people around the world who feel this way can hear it, and it helps the people on the ground who are leading the way. I’m not! I didn’t stop the pipelines from bringing the tar sand oil here, it’s the First Nations people and other local people who did.”

There is a cost to your environmental work. How do you mitigate the carbon footprint associated with your activism?

You frequently address these issues not as a celebrity, but as a mother and grandmother. What is it about the environment that makes you want to take a stand?

“I grew up in the wild hills of the Santa Monica Mountains. We lived on a dirt road and there were mountain lions, bobcats, coyotes, and a lot of wild critters… I’m 77 years old, so I remember the Earth when it was not spoiled, and what I see happening — whether it’s dramatic as the horror that’s happening in Alberta with the tar sands or the overdevelopment in Los Angeles — I feel it in my body. When I hear about the species that are becoming extinct, I feel it in my body.

“Then, I have grandchildren! If we proceed down the road we’re on, there won’t be a liveable future for them. There will be more diseases, more cancer, more species going extinct, a more violent climate, and I want them to be proud of me. I want them to feel that I did everything I could before it was too late.”

So, what’s the answer for a clean energy future?

“Oh, it’s really simple. All the fossil fuel that’s in the ground has to stay there — no new drilling. No expansion of tar sands, no drilling in the Arctic, no drilling anywhere. It’s got to stop, and I know that flies in the face of a lot of what people believe, but the fact is that alternatives exist, and parts of the world are already moving in that direction in a big way. We have enough existing fossil resources to tide us until we can be 100-per-cent green, we don’t need to keep drilling. The only reason that any of this is happening — the extreme energy, the Arctic, tar sands, fracking — is because certain oil companies want to make more money.… They just want to be richer, and then they buy candidates who will agree with them, and they start think-tanks who will say climate change doesn’t exist. They’re major bad guys, and it’s our lives and our future!

“Are we dumber than dogs? Dogs don’t soil their own kennels and that’s what we’re doing so a few people can get richer.”