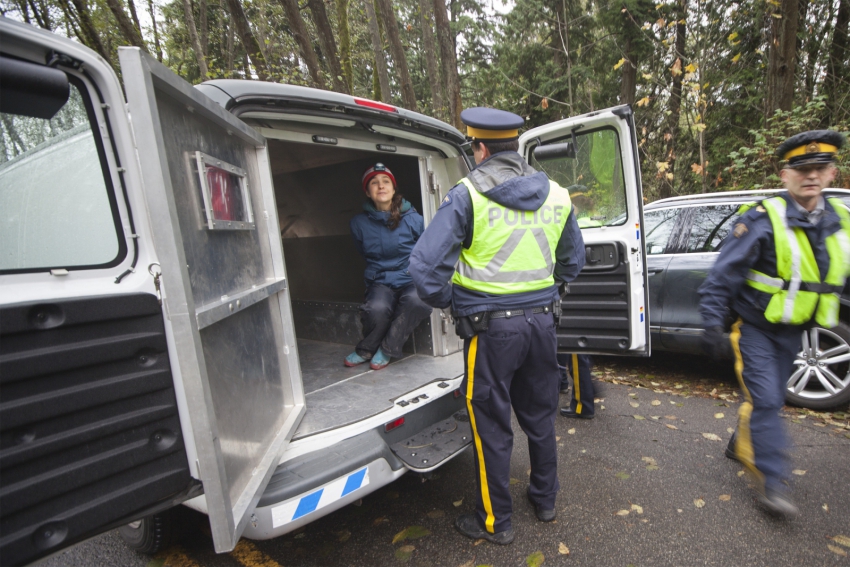 Brigette DePape, a Vancouver-based activist, is among 14 protesters against Kinder Morgan getting arrested on Burnaby Mountain. Photo by Mychaylo Prystupa

RCMP arrested 14 protesters on Burnaby Mountain this morning and are enforcing Kinder Morgan's injunction against pipeline opponents (according to activists, the number of protesters arrested is closer to 20). Kinder Morgan crews are now reportedly back at work on the mountain.

"I'm really sad. I've been fighting tears all morning," said Lynne Quarmby, an SFU scientist who is one of six citizens that Kinder Morgan has filed a multi-million dollar civil suit against.

"The injustice of it all. I know police are doing what they need to do. It's just the whole process is unjust."

"These are really good people who are really the leaders of our society...They're leading the way for the society we need to go, and they're being arrested," she said.

David Suzuki's grandson and Beyond Boarding co-founder Tamo Campos is said to be among those arrested. 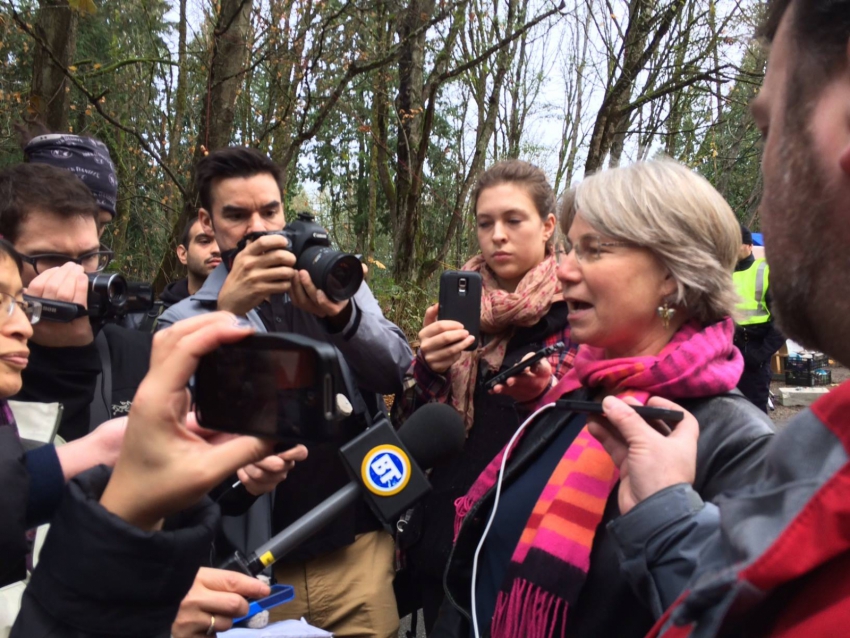 "Trans Mountain is pleased that the majority of the individuals occupying the area complied with the order and continue to exercise their rights to express their views in a respectful manner, while allowing our team to begin the work safely," Trans Mountain said in a statement.

"Our crews will be respectfully relocating any items that are in the designated work area. It will be secured and handed over to RCMP."

A witness said the RCMP told protesters that no one would be grabbed and taken away, and that they would be given a chance to move. However, the witness said vans appeared shortly after, and immediately seized non-resisting protesters, shoving them down to the ground and driving them away in police vehicles. Burnaby RCMP spokesperson Staff Sgt. Major John Buis said he couldn't confirm details of the arrests yet and that police were on their way to Burnaby Mountain to speak to media.

Sut-lut, a a Sḵwx̱ú7mesh elder who started the sacred fire onsite and contributed a wooden carving to the camp site, has been arrested. 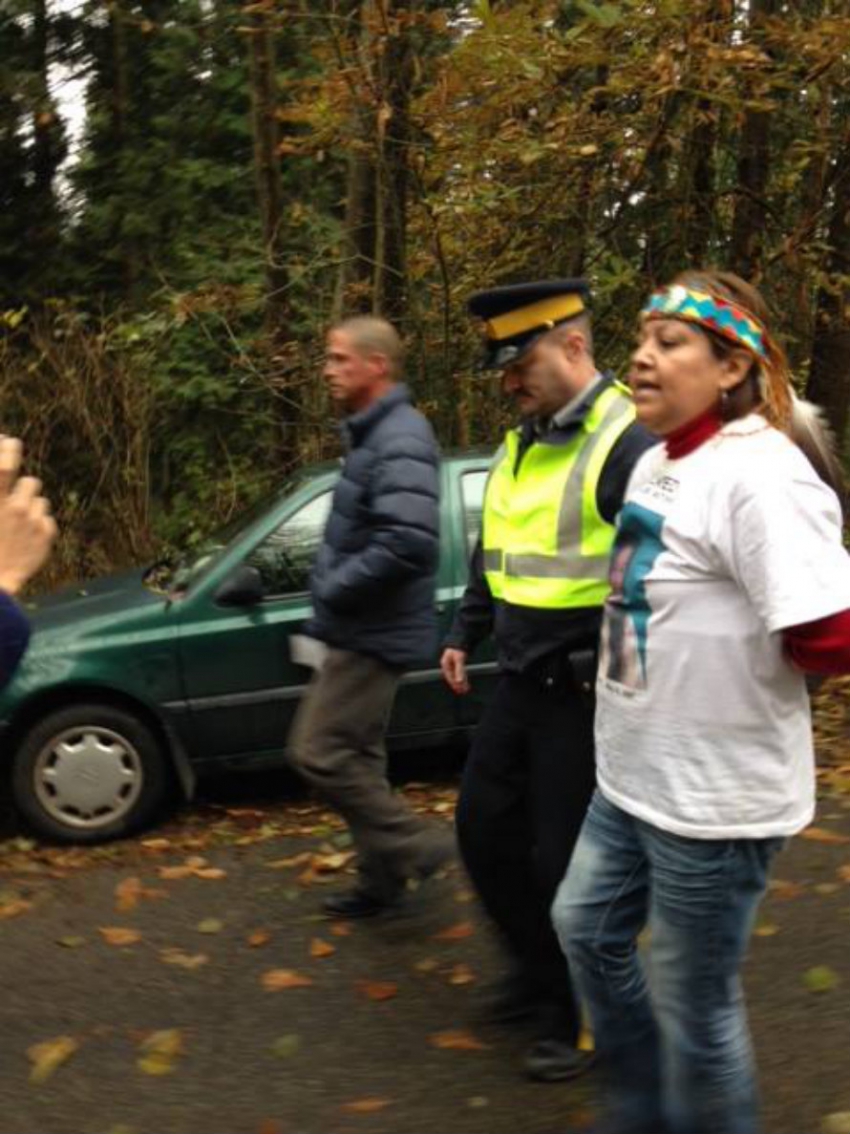 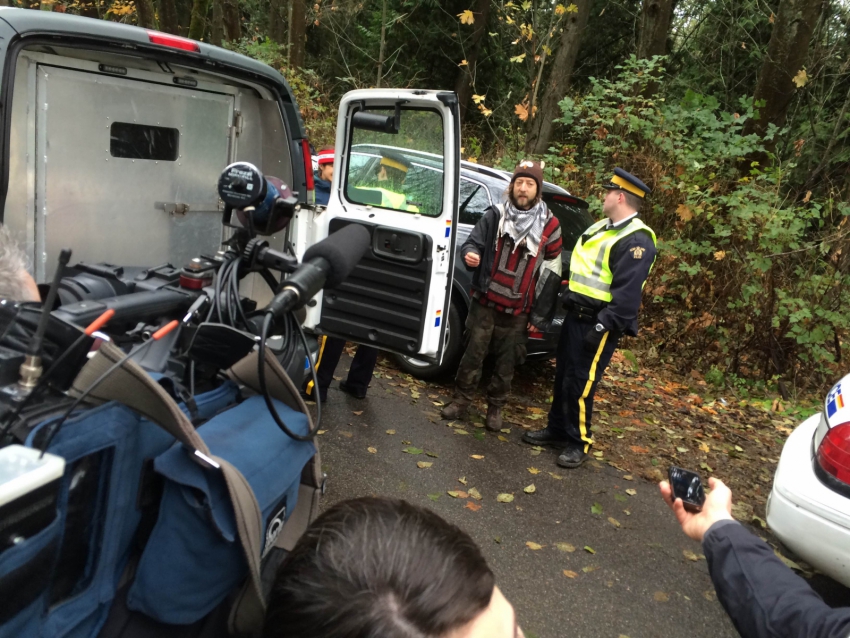 The witness said police were unnecessarily forceful, and that many of the protesters who have been involved in the Kinder Morgan pipeline opposition were regular Burnaby residents.