Premiers meeting in Yukon concerned about legalization of marijuana 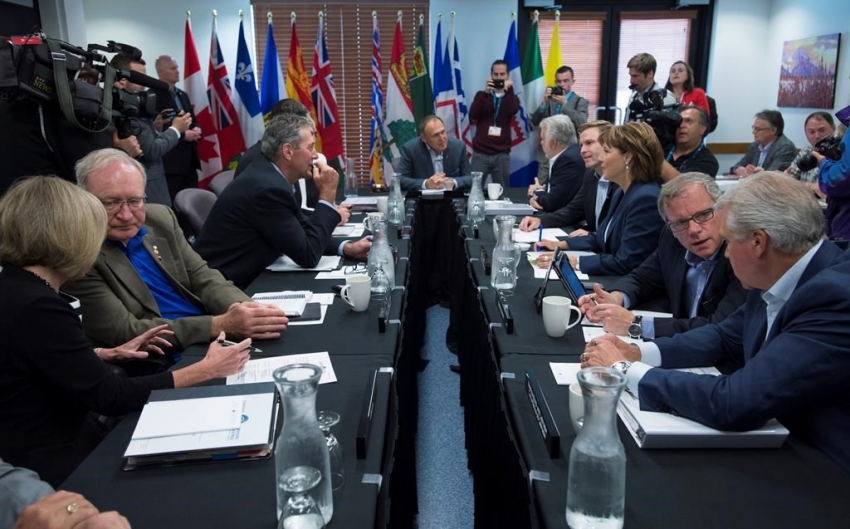 Canadian premiers met to discuss a number of topics in Whitehorse on July 21, 2016. Photo by The Canadian Press.

Premiers meeting in the Yukon say they want quick action from the federal government on the legalization of marijuana to prevent a patchwork of enforcement and distribution across the country.

"It’s one of the issues I want to raise today," he said. "I would hope we can develop a national approach, a co−operative approach."

"We need to see the federal legislation," she said. "We will build a system focused on safety."

Saskatchewan Premier Brad Wall said he’s most concerned about consistent enforcement across Canada when it comes to marijuana use.

Wall also took a run at Prime Minister Justin Trudeau’s recent remarks about the need for a national price on carbon. Although Trudeau was not specific on how that price would be enacted, Wall bristled at the idea that Trudeau spoke about the issue before a federal−provincial working group had a chance to report on it.

"If that’s to be a legitimate process, why then is the prime minister and the environment minister seemingly precluding the work of the committee?" he asked. "The prime minister’s committed to a much more collaborative process with the provinces.

"With the previous government, there wasn’t much talk about working collaboratively so there were no surprises, but, frankly, I’m not sure which is better."

Several premiers expressed optimism about the possibility of a much−anticipated deal on internal trade.

While Prince Edward Island’s Wade MacLauchlan warned there were "a few wrinkles" to iron out, Clark said she hoped those could be overcome.

"We all have wrinkles," she laughed.

For her part, Alberta Premier Rachel Notley was hoping for movement on energy infrastructure such as pipelines.

"I think that there is a general consensus amongst my colleagues that this is something that needs to move forward," she said.

Clark said she wanted that discussion to be broad enough to include electricity transmission.